Description: The 81st chapter of the Quran treats the themes of Resurrection and revelation. 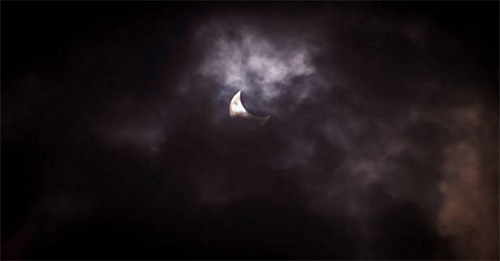 The chapter was revealed in Mecca.  It emphasizes the fact that people will be confronted by their deeds on Judgement Day, asserts the truth of the Quran, and calls people to the right path.  It opens with a powerful description of events on that Day, and the title of the chapter is taken from this description.

Verses 1-14 The reality of the Day of Resurrection

These verses sketch a scene of great upheaval which envelops the whole universe.  It is an event which reveals every guarded secret and leaves nothing hidden away.  Every human being faces what he has put forward for the Day of Reckoning and Judgement.  The great events mentioned indicate that the present familiar state of the universe, with its perfect harmony, measured movement, controlled relations, perfected by the Maker whose work is flawless, will suffer a complete breakdown.  Its role will be finished.  Along with all creation, it will move into a new predetermined phase of life, unlike anything known to us in this world.

The chapter aims to get this idea of the inevitable upheaval well established in people’s hearts and minds so that they may attach little or no importance to the values and riches of this world, though these may seem to be of lasting consequence.

The great terror which overwhelms the wild beasts in their jungles is the cause of their coming together.  They forget their mutual enmities, and move together, unaware of their direction.  They neither seek their homes nor chase their prey as they usually do.

The value of human life must have sunk very low in pre-Islamic Arabian society.  There existed a convention of burying young girls alive, for fear of shame or poverty.  The Quran describes this practice in order to portray its horror and to denounce it.  We are told that the murdered girl will be questioned about her murder.  The chapter leaves us to imagine how the murderer will be brought to account.  The social order of the pre-Islamic period would never have helped women to gain a respectable, dignified position.  God decreed to change it.  With Islam, the way of life God has chosen for humanity secures a dignified position for both men and women.

When all these great events take place throughout the universe, changing the status of all life, no one can entertain any doubt about what they have done in this present life, or what they have carried with them to the next life.  People will find themselves completely separated from all that has been familiar to them, and from their world as a whole.  Everything will have undergone a total change except God.  If man turns to God now, he will find that His support is forthcoming when the whole universe is overwhelmed by change.  Thus ends the first part of this chapter, leaving us with a vivid impression of the universal upheaval on the Day of Resurrection.

Verses 15-29 The reality of the revelation

The second part of the chapter opens with a form of oath using some very beautiful scenes of the universe.  Essentially, this oath is made to assert the nature of revelation, the Angel (Jibreel or Gabriel) carrying it, and the Messenger receiving and delivering it to us, as well as people’s attitudes to it, all in accordance with God’s will.

As the Quran makes this brief, full-of-life description of these phenomena, it establishes a spiritual link between them and man, with the result that, as we read, we feel the power which created these phenomena, and the truth which we are called upon to believe.  This truth is then stated in a manner which fits in superbly with the general theme of the chapter.  This Quran with its description of the Day of Judgement is conveyed by Gabriel to Muhammad, may the mercy and blessings of God be upon him.  The chapter gives a description of this chosen angel.  He is ‘noble’, honored by God, and he is ‘mighty’, which suggests that considerable strength is required to carry and convey the Quran.  What a great honor for Gabriel to enjoy such a position with the Lord of the universe.  ‘He is obeyed in heaven’, i.e.  by the other angels.  He is also ‘faithful to his trust’, carrying and discharging the message.

These qualities add up to a definite conclusion: that the Quran is a noble, mighty and exalted message and that God takes special care of man.  It is a manifestation of this care that He has chosen an angel of Gabriel’s caliber to bring His revelations to the man He has chosen as His Messenger.  As man reflects on this divine care he should feel humble, for he himself is worth very little in the kingdom of God.

There follows a description of the Prophet who conveys this revelation to mankind.  The chapter seems to say to them: You have known Muhammad very well over a considerable length of time.  He is your old, honest, trusted friend.  Why, then, are you fabricating tales about him, when he has been telling you the simple truth which he has been entrusted to deliver to you.

The chapter then reminds us that it is up to every individual to choose whether to follow the right path or not.  Since God has granted everyone a free will, every human being is responsible for himself.  The right path has been indicated for everyone who wishes to be upright.  Anyone who follows a different path shall, therefore, bear the responsibility for his actions.

The chapter concludes by stating that the operative will behind everything is the will of God.