Description: A chapter that references the Muslim pilgrimage to Mecca and delves into topics of idol-worship and the Day of Judgement. 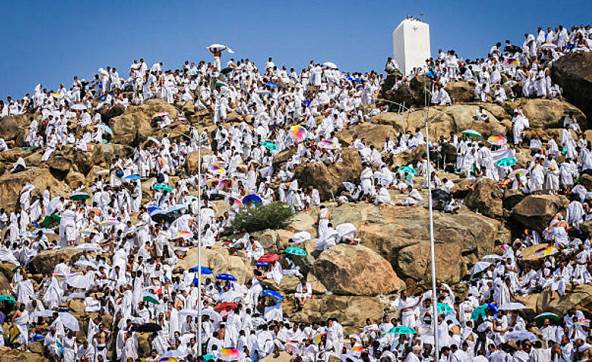 The chapter gets its title from the reference to the rite of pilgrimage that Muslims believe was initiated by Abraham.  The theme is introduced by condemning those who barred believers from access to the Sacred Mosque and is followed by permission to fight when attacked.  The chapter begins with the Day of Judgement and repudiates those who worship idols, later describing them as powerless to even create a fly.  In the end, the chapter urges Muslims to endure in following the faith of Abraham.

The chapter begins with an awesome opening that makes hearts tremble.  It addresses all mankind, calling on them to fear their Lord and warning them against what may happen on the eventful and terrible Day of Judgement.  When the details are given, we find them even more frightening.  We have a picture of every suckling mother completely unaware of the child she is nursing: she looks but does not see, moves but only aimlessly.  Every pregnant female miscarries because of the great shock that engulfs her.  All people look drunk, but they are not.  Despite this horror, we are told that some people dispute about God, having no fear of Him.  If they are doubtful about returning to life, then they should reflect on how life is initiated.  They should look at themselves, and at the earth around them.  There are numerous indications that tell them that the whole thing is very close to them, but they pay little heed to the significance of the indicators within themselves and on earth.  The One who originated life in the first instance is the One who brings it back in the final stage.  They will then be given their reward for whatever they did in this first life.  Such resurrection is dictated by the purpose of creation.

The chapter paints a picture of a type of person who weighs up faith against what profit or loss he is likely to achieve as a result.  Thus, his approach to faith is the same as any business transaction he conducts.

Faith is the mainstay of a believer’s life.  The world may be swayed and shaken, but the believer stays his ground supported by this mainstay.  Events may pull him in this or that direction, but he remains firm in his resolve.  Contrasted with this is the person who looks at faith as a commercial endeavor.

Verses 25-37 The Sacred Mosque and its status, obligation to Hajj, goal of honoring the sacred sites of God, for each faith community there are sacred rites

It speaks about the unbelievers who turn people away from God’s path and from the Sacred Mosque in Mecca.  The reference here is to those who opposed the message of Islam when it started in Mecca, and who sought to turn people away from it.  They also confronted the Prophet, may the mercy and blessings of God be upon him, and his Muslim Companions seeking to debar their entry into the Sacred Mosque at the Kabah.  It then speaks about the basis on which this mosque was founded when God assigned its building to Abraham and ordered him to call on all people to visit it for pilgrimage.  Abraham’s instructions were very clear: that this mosque must be established on the clear basis of God’s oneness, so as to prevent any form of associating partners with God from being practiced in or near it.  It must be kept open to all people, whether they reside nearby or come from afar.  None is to be denied entry, and none is to claim its ownership.  The chapter then outlines some of the rituals of pilgrimage and how they enhance people’s consciousness and constant remembrance of God.  It also stresses the need to protect the Sacred Mosque against any aggression by those who try to turn people away from it or change the basis on which it is founded.  Those who fulfil their duties of protecting the purity of the faith are promised victory.

Verses 38-70 God defends the believers and legitimacy of fighting, taking lessons from the destruction of the old people, people’s attitude toward messengers and toward the Quran, reward of the Emigrants, proofs of divine power, nations have different rituals and acts of worship

The Prophet is reassured that God’s power will intervene to provide him with the help he needs ensuring the failure of his enemies.  The same power intervened in the past to support earlier prophets and messengers, and to punish those who denied and opposed them.  The unbelievers are directed to reflect on the doom suffered by earlier communities; even though such reflection benefits only hearts and minds that are open and receptive.  It is not only eyes that can be blind, for real blindness is that of the heart.  The Prophet is also reassured on another count, namely that God protects His messengers from Satan’s wicked scheming, just like He protects them from their opponents’ plots.

On the Day when all dominion belongs to God alone, the believers and those who deny God’s message will end up in contrasting positions.  All this is given within the context of God’s support of His messengers, protection of His message and the reward He has in store for those who believe and those who refuse to believe.  This passage begins with a reference to those who migrate for God’s cause.

Verses 71-78 Polytheists worship of idols, honoring God and professing His Oneness and choice, religion of your father Abraham, God named you Muslims before

The section refers to their worship of deities that have no sanction from God, as well as their worship of beings they do not know.  They are criticized for being hard hearted and for their dislike of hearing the truth.  In fact, they would not shrink from attacking those who recite God’s revelations to them.  They are threatened with the Fire which will be their ultimate abode.  This is a promise that will never fail.  This is followed by an announcement to all mankind, making it clear that those whom they worship instead of God are devoid of power.  Their weakness is shown in a humble image that carries no exaggeration, but the way it is presented brings their shameful weakness into sharp relief.  They are shown as incapable of contending with flies, or of retrieving what a fly takes from them.  Yet, unbelievers claim that such beings are deities.

The passage and the chapter end with an address to the community of believers requiring them to fulfil their duties as leaders of humanity.  They should prepare themselves for their task with prayer, worship and good action, seeking God’s help and protection.