Description: Connections are made with the battles fought between the Byzantines and Persians in the time of Prophet Muhammad, followed by reflection on God’s creation. 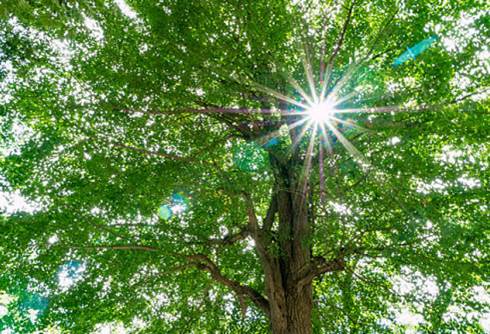 The chapter was revealed in the city of Mecca and opens with a reference to the defeat of the Byzantines (also known as the Roman Empire) at the hands of the Persians (613–14 CE) in Syria, and the subsequent victory of the Byzantines in 624 CE.  The chapter urges people to reflect on their own creation and the heavens and earth.  God’s power to give life to a barren land is an indication both of His ability to raise the dead and of His mercy to mankind.  The disbelievers are warned to accept faith before it is too late, and Prophet Muhammad, may the mercy and blessings of God be upon him, is urged to persevere and to ignore the bullying of the disbelievers.

Verses 1-7 Promise for the believers to gain victory

The first few verses of this chapter were revealed when Persia overpowered the Byzantine Empire in the Arab areas that were under its rule.  This was also a time when arguments in Mecca raged between the early Muslims and Arab idolaters.

Since the Byzantines at that time were Christians, and the Persians were Magians, the unbelievers in Mecca exploited the event, drumming up the victory of polytheism over monotheism, and seeing in this Persian victory an omen for their own victory over the believers.

Therefore, the opening of this chapter heralds a victory for the people of the Scriptures, the Byzantines, within a few years.  It says that this victory will bring much joy to the Muslims because they love the believers of any divine religion to gain the upper hand.

Verses 8-32 Reflection on the signs of God, the end of previous nations, and the inevitable occurrence of Resurrection. Some proofs for divine power and oneness, and Islam being the religion of natural disposition

The Quran does not, however, stop at making this promise, nor does it confine itself to the event mentioned.  In fact, it uses the event to show the believers and their opponents wider horizons.  It establishes a link between them and the universe.

It also relates God’s rule to support divine faith to the great truth that regulates the heavens, the earth and all that is between them, as well as to the past, present and future of humanity.  It then moves on to the life to come and the world beyond this earth.  Indeed, the Quran takes us on a great round in which we see the marvels of the universe, the human soul, people’s situations and the wonders of nature.  We are, thus, able to look at the wider horizons of knowledge, for our lives have been elevated and broadened.  Furthermore, we are released from the strict confines of time, place and event, and can look at the universe, its operative rules, history, present and future.

Verses 33-45 Attitude of the polytheists to joy and harm, and universality of the Islamic message

People’s concept of the true nature of the bonds and relations in this great universe is set on a higher platform.  They begin to feel the real greatness of the laws that govern the universe and human nature, and appreciate those that regulate human life and its events.  In this way, positions of victory and defeat are defined, and fair measures to judge people’s actions and activities in this life are set, so as to give them just reward both in the present life and in the life to come.

In the light of this broad concept, the universality of the Islamic message is clearly shown.  Its interaction with events and world situations, even when it is still in its infancy and confined to Mecca and the surrounding valley, appears to be very positive.  Its scope is broadened beyond this earth to link it to the nature of the universe and its major rules, human nature and its profound depths, as well as to the past and present of human life both in this world and in the world beyond.

Thus, a Muslim’s heart and mind are linked to these horizons to influence his feelings and the way he looks at life.  He looks up to heaven and the life to come and contemplates the wonders and marvels of the universe.  He appreciates his own position, and that of his community, in this great expanse.  He realizes his own value and the value of his faith both in people’s and God’s measures.  He thus fulfils his role and does his duties with a clear mind and with confidence and reassurance.

Verses 46-59 Proofs for God’s power and oneness, ungratefulness toward divine favors, unbelievers and the people of faith on the Day of Resurrection

The chapter depicts the fickleness of people’s cares and interests and how these are unsuitable as a basis for building human life.  What people should look to instead is a constant measure that does not bend to suit self-interests.  It describes such people when they enjoy God’s mercy and when they are afflicted by hardship, as well as in situations of affluence and poverty.  It moves on to speak of how provisions should be used and increased.  It then discusses the question of God’s alleged partners from this angle, showing how such alleged deities can never provide sustenance, initiate or terminate life.  It links the spread of corruption on land and sea with what people do, and directs them to go about the earth reflecting on the ends met by past communities of unbelievers who associated partners with God.  It then directs the Prophet to follow the religion of pure human nature before a day comes when everyone will be rewarded for what they do.

The chapter then provides some scenes of the universe, commenting that true guidance is that given by God, while the Prophet’s task is only to deliver his message.  It is not in his power to make the blind see or the deaf hear.  The chapter then takes us on a new round within the human constitution, reminding us of the stages of man’s development from beginning to end, starting with utter weakness in childhood, before it mentions death, resurrection and judgement, giving us a new scene of that day.

Verse 60 Urging the Prophet to be patient

The chapter concludes with a directive to the Prophet to remain patient in adversity and to bear whatever difficulties he meets.  He should always remain confident that God’s promise will be fulfilled.  Hence, he must not let himself be disturbed by those who lack faith.