Description: A journey by night, transgressions, commandments and some explanations. 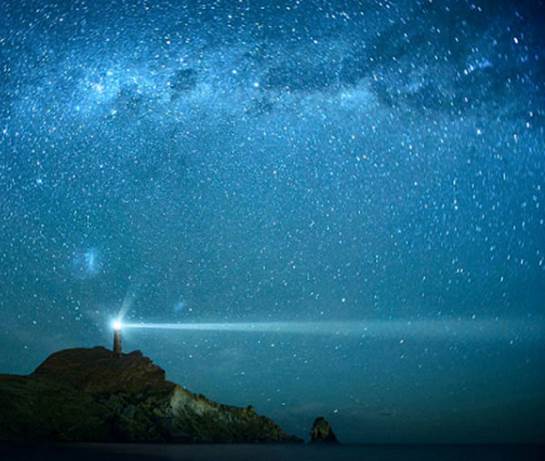 This is a Meccan chapter of 111 verses.  It is named for the miraculous night journey, from Mecca to Jerusalem, which Prophet Muhammad, may the mercy and blessings of God be upon him, undertook in the space of a single night.  This journey is mentioned in the first verse and again in verse 60.  Chapter 17 contains an articulate and easy to understand set of God’s commandments.  The bulk of the Night Journey deals with two things, the Quran and Prophet Muhammad and the nature of his prophecy.  The Children of Israel are also mentioned.

Verses 1- 8 A journey by night

Glory be to God.  He took Prophet Muhammad on a journey, over one night, from the sacred House in Mecca to the blessed area in Jerusalem surrounding the mosque.  This was in order to show him some signs.  God also gave Moses, who was a thankful servant, a book as a guide for the Children of Israel.  They are the descendants of Noah, and were warned not to take any Protector other than Him.

God warned the Children of Israel that twice they would become arrogant transgressors and that twice they would be punished.  After the promised punishment for the first transgression, God allowed them to prosper.  When the second transgression came, God allowed their enemies to destroy the temple as punishment.  God wants to be merciful but if the behaviour is repeated the punishment will be repeated, and Hell will become their prison in the Hereafter.

The Quran guides us on a straight path.  It leads those who do well to a magnificent reward and warns those who do not believe in the Hereafter of a painful punishment awaiting them.  Humankind prays fervently for things that will lead him to evil as easily as he prays for that which is good.  Humankind is impatient and acts without thinking things through.

God made night and day as two signs.  The night is enshrouded in darkness and is followed by the light of day in order that humankind might seek his bounty; and to count the years in order to calculate time.  Every person is responsible for his own destiny and on the Day of Judgment he will be confronted by his book of deeds.  Read this record, he will be told, and know what your destiny will be.

Everyone who is guided does so for his own benefit but if he sins he harms nothing but himself.   No person bears the burden of another person and no one will be punished until a Messenger has come to show the true path.  If the corrupted persist in disobedience they will be utterly destroyed.  Many past generations have been destroyed because God sees everything.  Those who wish only for this worldly life, are granted their wish but in the end they will be condemned to Hell.  The person who strives for a good life in the Hereafter will be accepted.  Both parties receive their Lord’s bounties and some are given more than others, but the final reward is the one that counts.

Do not associate anything with God or you will be disgraced and forsaken.  God commands that you worship nothing but Him, and that you are kind to your parents.  As they grow older, do not be impatient or harsh rather be humble towards them and pray that God treats them mercifully as they treated you when you were young.  God knows exactly what is in your heart and He is most forgiving towards those who turn to Him in repentance.

Give your relatives their rights but also spend on the needy and the travellers.  Do not be wasteful, squandering your money.  If you cannot assist needy people then at least be courteous to them.  Do not be miserly or extravagant, instead take a middle path.  God gives abundantly to some and sparingly to others, He knows and observes everyone.

Do not kill your children because you think you cannot provide for them, it is a great sin.  It is God who provides for them; they cannot cause poverty; that is the will of God.  Do not even come near to committing adultery; do not take a life, except within the laws of God.  If anyone is killed unjustly, God has granted a right of retribution but do not be vengeful and take things too far.  Do not deal with the property of orphans except with good intentions.

Honour your commitments because you will be questioned about them.  Conduct your business fairly, give full measure and do not balance your scales incorrectly.  Do not pursue that of which you have no knowledge - use your heart, eyes and ears to confirm the things you hear.  Do not walk about the earth arrogantly.  A human being is just a small and weak creature; don’t act as if you are something more than that.

The evil deeds mentioned above are hateful to God and He knows the wisdom in their prohibition.  Again, do not set up something other than God to be worshipped or you will be thrown into Hell.  Do not say that God has taken the angels as daughters.  That is a monstrous statement with grave consequences.

The Quran explains things in many different ways but that makes some people turn even further away.  If there really was some other deity, why does it not dethrone the Master of the Throne?! He is exalted and far above what they say about Him.  Everything in the heavens and earth glorifies Him, but you do not understand how they glorify.

When you recite the Quran there is a barrier between you and those who do not believe in the Hereafter.  They do not understand it and when God’s Oneness is mentioned they turn away.  God is aware of what they (the unbelievers of Mecca) want to hear (from Prophet Muhammad), and He knows that privately they call Prophet Muhammad a man bewitched.  They dispute that they will be raised up after they become bones and dust.  God says, even if they were stones and iron they would be bought back and tells Prophet Muhammad to say that.  When they ask who will do this, say, the One who created you in the first place, and when they ask when this will take place remind them that this might well be very soon.  On the Day you are raised up you will imagine that you had been dead for only a very short time.

Thank you these summaries are very helpful.

i want to be quran memorizer