Description: The story of the sleepers in the cave and a parable. 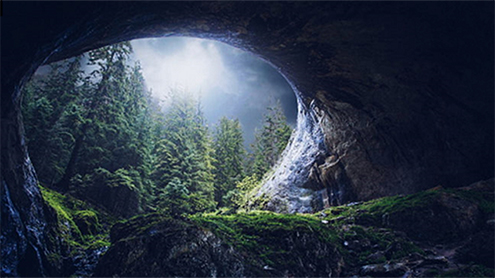 This 110 verse chapter was revealed in Mecca.  It takes its name from the story of the people who fell asleep in a cave, told in verses 9 to 26.  It contains three stories and a parable while opening, and closes with references to the Quran itself.  It is believed to have been revealed as a comfort because the fledgling Muslims were suffering ongoing torment and persecution at the hands of the ruling classes of Mecca.  It was also sent down to answer three questions that had been put to Prophet Muhammad, may the mercy and blessings of God be upon him, in order to test him.

Praise be to God who has revealed an uncomplicated book; a book that does not deviate from the straight path.  It warns of a severe punishment, but also gives good news to those who do good deeds of an excellent and everlasting reward.  It warns those who declare that God has an offspring by telling them that they have no evidence of such a monstrous lie.  Prophet Muhammad is told that he is in danger of worrying himself to death over the people who do not believe in his message.  However the fact of the matter is the earth has been filled with attractive things in order to test people and in the end everything will be reduced to dust.

Do you think that the story about the sleepers in the cave is a wonder?[1]  The young men sort refuge in the cave, praying that God, the most merciful, would guide them to a way out of their predicament.  God put them into a deep sleep and awakened them after a long period of time.  How long they had been sleeping is argued about by believers and nonbelievers alike but now God reveals the truth of the matter.  They were young men with strong faith and God gave them even more guidance.

(Before taking refuge in the cave) They declared that God was the Lord of the heavens and the earth and they would never call upon any deity other than Him.  Those who have taken other deities have done so without any clear authority and there is nothing more wicked than a person who lies about God.  They discussed it amongst each other and withdrew to the cave knowing that God would cover them with His mercy and guide them out of the ordeal they found themselves in.

And if you had been there with the sleepers you would have seen that the sun rose on their right and set on their left.  All the while they lay in an open space within the cave.  This is one of God’s signs.  Some are rightly guided while others are left to go astray.  If you looked at the sleepers you might have thought that they were awake, they turned from one side to the other and their dog lay stretched out at the entrance to the cave.

If you had seen them you would have ran away filled with terror.  In the same way that He put them to sleep God woke them up.  The youths began to question one another, asking, how long have we been sleeping.  It felt like only a day or part of a day and they agreed that only God knew for sure how much time had passed.  One of them went to the town with a silver coin to look for food.  The others warned him to be cautious and not disclose their whereabouts.  If he was caught he would be stoned to death or worse he would be forced to change to their religion.

So God brought them to people’s attention so that everyone may know that His promises of Resurrection and the Last Hour were true.  The people who found them argued and disputed amongst themselves and those who prevailed decided to build a house of worship over them.  The people who heard the story argued about how many sleepers there were, but they guess at the unseen because only a few people have any real knowledge.

Therefore adhere to what is clear and never say that you will do something without saying God willing.  If you do forget then remember God and hope that He will guide you to even better conduct.  Some say they stayed in the cave for 300 years, others say 309, but Prophet Muhammad is told to say that only God knows exactly how long they were there, because He is the one who knows all the secrets of the heavens and the earth.  There is no protector besides God and He does not let anyone share in His rule.

Prophet Muhammad is told to recite what has been revealed to him and there is no authorisation to change anything in any way.  Be content to be among those who seek God’s approval and do not let the notable people of Mecca drive away the weak and humble among your followers.  Tell them that now the truth has come; let the people choose whether to believe it or deny it.  The wrongdoers will end up surrounded by Fire with nothing but a wretched drink or and a pain filled resting place.  Good works will never be wasted; they will be rewarded with gardens of bliss with flowing streams.  They will wear garments of silk and golden bracelets and recline on soft couches in a pleasant resting place.

Tell them, Prophet Muhammad, about the parable of two men both with beautiful gardens and land for cultivation.  Both gardens produced abundantly and there was a river between the two properties.  One man told the other that he was wealthier and had more followers then the other, and he walked into his garden saying that this will never end and the Last Hour will never come and even if it did God would reward him with something even better.  The other man asked, do you disbelieve in the One who created you, for I do not, and you should have said that all is as God willed and no one has power except Him.   Although I have less, God might give me something better and destroy what you have.  And so it was that the first man’s fertile property was destroyed and he wished he had not attributed his prosperity to himself rather than God.  Then he realised that the only real protection comes from God.

[1] The word Ar-Raqeem is also mentioned here and this may refer to the name of their dog, or the tablet on which their names were inscribed or the mountain in which the cave is situated.