Description: A very short chapter with a very large lesson; three sources of evil and where to seek refuge from them. 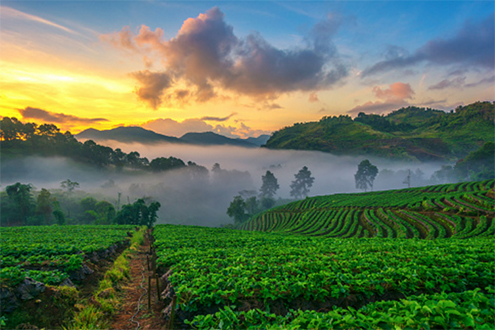 Chapter 113 is the penultimate chapter in Quran and is the first in a pair of chapters that were revealed at the same time. Their subject matter and themes are similar and they are known together as the ‘chapters of refuge’.

When Prophet Muhammad, may the mercy and blessings of God be upon him, was spreading the message of Islam, the opposition against him was becoming more and more intense. The disbelievers of Mecca were trying to disrupt the mission in any way they could including devising plots to harm and even kill Prophet Muhammad. God therefore instructs Prophet Muhammad specifically and the believers in general to seek refuge in Him from any source of fear, hidden or visible, known or unknown.

The Daybreak is a very short chapter of just five verses. Its title is taken from the last word of the first verse. Al-falaq means a lengthwise division, fissure or cleft. When it is used with the word dawn it means the break of dawn.

The chapter begins with the same word as the chapter before it and the one after it. That word is "say" or in the Arabic language Qul.   Together chapter 112, 113, and 114 are known as the ‘three quls’. From the traditions of Prophet Muhammad, we know that there are many authentic sayings that recommend reciting these three chapters to seek God’s protection throughout the day or the night. Thus, in chapter 113 God begins, when you seek refuge in Me say these words.

Verse 1 Seeking refuge with the Creator of everything

A deeper meaning of the word falaq is to create, or to bring into being. With reference to the fissure or the split it denotes that God is the one who splits the seed, bringing forth the living from the dead. God, the Lord of all creation brings light out of darkness. The sun, as it rises splits through the darkness of the night. Refuge is sought from the One who exposes everything hidden in the darkness and bestows safety by kindling the light of day.

Verse 2 Refuge with God from all evil

In some of the translations to English of this chapter you will find the following words, ‘from the evil of what He has created’. Some more modern translations have changed this to from the evil of created things in order to clarify that the evil is attributed to the created being who did it and not to God’s creative act, which is of course free from evil from all perspectives. Evil or that which contains evil is however a by-product of God’s creative act because He is the Creator of everything.

Verse two was seeking protection from evil in general, now in verse three it becomes more specific. Particular types of evil come out from the darkness of the night. Criminals and the perpetrators of wickedness, wild animals, raiders and bandits, who plunder and destroy, all use the darkness to cover their approach. God commands us to seek refuge with Him from the evils and calamities which descend at night. We seek refuge with the Lord of the breaking dawn from the evils of the dark night.

God mentions this as the next great source of evil. It includes all forms of witchcraft and sorcery whereby they are deceived into acting or thinking in an unnatural way.  There are many forms of witchcraft throughout the world and it almost always includes a belief that some people can influence others by certain rites, formulas or actions. The verse particularly refers to a form of witchcraft carried out by the women of Arabia at the time, tying knots in cords and blowing on them to cast spells.  God is the ultimate Protector; no power is able to cancel His authority.

The evil of the envier is the third source of evil mentioned.  Envy is the begrudging reaction a person feels towards another who has received blessings and bounties from God. It is a baseless grudge often accompanied by the wish that the favours cease. The Arabic word used here for envy is hasad which means destructive or malicious envy and it is one of the most destructive emotions a person can have towards his fellow human beings and can cause untold damage.

This chapter covers the three most dreadful things that are able to harm people. The most important lesson that it teaches us is that if a person encounters these evils they must seek protection, but only from one place; from God Himself.

I really enjoyed the summary of surah falaq... I have learned many things surrounding the chapter... Thanks to the editor and provider..