Description: An oath, free will, an invitation to climb the steep ascent and the outcome of doing so. 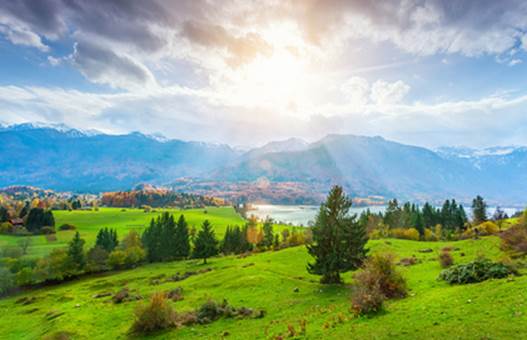 The subject matter of this 20-verse chapter indicates that it was revealed in Mecca.  At the time of its revelation, the disbelievers had convinced themselves it was acceptable to oppress and harass Prophet Muhammad, may the mercy and blessings of God be upon him, and his followers, especially the weaker members of society.   Chapter 90 is named for the word in the first verse ‘al-balad’, the city (Mecca).  The miraculous nature of the Quran is shown here when it manages to explain a vast subject, the true position of humankind, in just a few sentences.  Each person is offered two distinct paths, one towards good, the other towards evil, and each individual is able to exercise free will by choosing his own path.  He should therefore seek to do good deeds rather than indulge in arrogance and wastefulness.

This chapter opens with an oath.  God swears by the city of Mecca.  The people of Mecca are well aware of why an oath would be sworn by their city.  They know that it is an important city in the midst of desolate mountains.  They know that it is the place where Prophet Abraham restored the first ever House of God and they know that it sits in a barren valley where it is the only place of safety and security.  It is a sacred place in a lawless land.

God adds Prophet Muhammad to his oath and calls him an inhabitant of this city, a resident who further enhances the glory of the city.  However, at the time the disbelievers considered it their right to oppress and tyrannize the Prophet even in this sanctified city.  It was as if persecuting the Prophet had been made lawful.  God concludes his oath by swearing by parents and their children or as some scholars say, by Prophet Adam and his children - humankind.  This part of the oath is an introduction to the discussion that follows; the nature of humankind.

Humankind has been created for hard work and for testing.  The struggle may take different forms depending on when and where a person is born.  Even when a person’s life is one of ease and comfort that person must struggle to please God.  Your place in the world is a test.  A person suffering in this world might qualify for a prosperous position in the Hereafter.  Another person, in a position of power, for instance, might only fulfill his lusts and desires and end up suffering affliction in the Hereafter.

Does each person imagine that no one can overcome him; does he think that there is no one more powerful than himself? How could he have deluded himself into believing this when a single bolt of lightning is enough to show humankind how weak they really are? I have wasted great wealth, spent on anything I desire, he says; in his arrogance he has forgotten that God watches over him.

God says that He has given every person two eyes with which to see, and a tongue with which to speak and two lips to control what speech comes out of his mouth.  A person might think they are powerful, but it is God who has granted him what little power he has.  God has granted us knowledge and wisdom and the ability to know and choose between right and wrong.

But, God continues, some people have not attempted to climb the steep path.  They may have spent their wealth but not in ways that are pleasing to God.  There are countless bounties that should motivate people to climb as high as they are able, yet they do not.  What will make them understand?  God explains just what things point people towards Paradise.   It is the freeing of slaves, and feeding someone that is hungry, whether they are a relative, or an orphan, or somebody needy and in distress.

These are examples of actions that were totally lacking at the time of this chapter’s revelation.  Slaves were treated with great cruelty.  Famine and hunger were widespread and orphans were often mistreated even by their close relatives.  These actions test the character of the believer.  And they are followed by the most important step of all.

Climbing the steep path means to be one of those who believe, and counsel one another to be steadfast and merciful.   What would be the value of feeding the hungry or freeing the slaves if a person was without faith? Those who believe live in a community of believers that encourages kindness and compassion.  They are the people of the right hand, the ones that are will enjoy Paradise as compensation for their belief and their actions.  They will receive their records in their right hand and they will proceed to Paradise.

The disbelievers, those who receive their records in their left hand will proceed towards the Hellfire.  They disbelieved in God’s revelations.  These people chose not to climb the steep path.  The fire will be all around them, closing in on them.  They will be encircled by it, locked in with no hope of escape.