Description: Revealed in the fourth year of Prophet Muhammad’s mission, it consists of 55 verses and takes its title from the first verse that mentions the incident of the ‘splitting-of-the-moon.’ That incident took place in Mina, close to Mecca, five years before the Prophet’s migration to Madina. 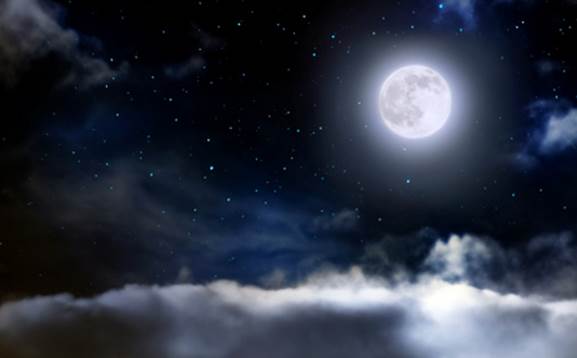 When Prophet Muhammad delivered the message of God to the people of Mecca, most of them strongly rejected the concept of resurrection.  They refused to accept him as being the Messenger of God and demanded that if this world is really going to come to an end then there should be some physical sign, some miracle that should be shown to them as a proof.   So five years before the Hijrah (migration) of the Prophet to Madina, God made them witness a miracle.  One night they saw the moon split into two pieces and the two halves were so separated that each one appeared on either side of the mount Hira.

After a moment the moon was again joined together.  One would think that after seeing such a tremendous sign, they would have accepted the truth, but it did not affect their attitude at all.  They stubbornly said that it was just some kind of magic and nothing else.  Why do people persist in remaining ignorant of the truth? Why don’t they accept such clear proofs? It is because their lives revolve around their own desires and their false self-image makes it almost impossible for them to admit that they were chasing the wrong ideals.  Therefore, they prefer to ignore all those things that make them uncomfortably aware of the truth.

The splitting of the moon was not the only sign of God’s power; rather, the people of Mecca were also well informed about the nations that had been destroyed before them, because of rejecting God’s message that the Prophets had brought to them.

God has given us the choice to think and choose our way of life in this world but those who misuse this choice, and reject God’s guidance should not forget that there would come a day when they will not be able to say "no" to the caller, who will call them towards the final Judgement.  The arrogant speeches and arguments against God and His Prophet will all be forgotten and they will rush blindly towards their fate.

The people of Noah were so arrogant that they forgot their own helplessness.  God sent upon them a mighty flood which drowned everything except the boat carrying Prophet Noah and the few people who had believed in God.  This shows God’s extreme mercy and compassion for His Messenger and for the believers of truth, but at the same time His punishment for those who stubbornly reject His message, is also evident.

People of ‘Ad were extremely powerful, not only in skills but also in physical attributes; but when they continually rejected the message of God, He sent to them a severely cold wind which gave them a humiliating punishment.  Then the people of Thamud also made the same error.  They were also very proud of their worldly success, and thought that Prophet Salih was just spreading some self-created stories or lies.  Then they demanded a miracle and God sent to them a she-camel, about which they had been warned not to give her any harm, but they killed it thinking that they could get away with whatever they desired.  Consequently, God gave them a painful end.

The people of Lot were the first people to indulge in homosexuality, and it had blinded their senses to such an extent that when the angels came to the Prophet’s house in the guise of young men, these people rushed to have them; nothing mattered to them except the fulfilment of their lust.

The same thing happened to Pharaoh, when he thought himself to be indestructible.

A common misunderstanding is that the Quran is for scholars.  God is saying in such clear words that He has Himself made it easy for us to understand and now it’s up to us to contemplate and receive its guidance.  This is the only book in the world which has been read by all sorts of people.  Even illiterate people can benefit from its clear guidance.  Along with simplicity, there is an amazing depth in its words that stimulates the intellect of highly learned people too.

How can they delude themselves when God has sent such clear warnings? Those who persist in their disbelief and do not bother to read the Quran or follow the teachings of Prophet Muhammad, should know that they are committing a terrible crime, even if they are in an illusion of being "good people."

In this world, they made fun of the believers that they were being overly concerned with the torment of Hell.  Their claim is that God is so merciful that He cannot burn anyone, but God is warning them that this fire will definitely touch those who made fun of it and made no effort to save their souls from it.

At the end of this chapter, God is showing us a glimpse of the splendid gardens of delight, the beautiful Paradise, which He has prepared so lovingly for the ones who remained faithful to Him in the worldly life.  These people willingly sacrificed their egos and desires for the sake of God so He will give them this wonderful reward where all their desires will be fulfilled eternally.