Description: The first two verses talk about the victory of Islam.  The third verse tells us how to make successful supplications by understanding how Prophet Muhammad sought the forgiveness of God. 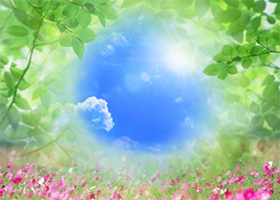 This chapter is believed to be one of the last revealed and thus the majority of Islamic scholars believe it to have been revealed in Medina.  Its title, The Help, is taken from the word ‘help’ (nasr) that occurs in the first of three verses.  When we read the chapters of the Quran chronologically we find that this chapter is directly connected to both the previous and the following chapters.  In the previous chapter ‘The Disbelievers’ (Al-Kafirun), Prophet Muhammad, may the mercy and blessings of God be upon him, is told to separate completely from the people of Mecca who refused to embrace Islam.  In ‘The Help’ Prophet Muhammad and those who followed him are guaranteed victory.

The word deen in the previous chapter often translated to mean religion can also be translated to outcome.  The outcome will be that a person will experience the consequences of their actions.  The consequence for Prophet Muhammad and the fledgling Muslim nation, we are told in ‘The Help’, is victory, in this world and the next.  The chapter that follows ‘The Help’ is ‘The Palm Fibre’ where we see that the consequence for those who disbelieve is a flaming fire, quite a different outcome altogether.

Verse 1 The victory belongs to God

In the Arabic language there are several words for help and they are used throughout the Quran.  They all have slightly different shades of meaning.  This particular word nasr (help) is used for the kind of help that is used to overpower an aggressor or oppressor.  It is not help moving furniture or digging a vegetable garden.  If we say the (nasr) help of God, we know that it is tremendous and incomparable.

This victory is usually believed to be the conquest of Mecca.  When Prophet Muhammad returns to Mecca as a conqueror it is a nonviolent conquest and thus a particularly amazing victory.  However, many scholars believe that the word victory here does not mean that one particular victory but many victories proving that God is the supreme power in Arabia and beyond.

Interestingly many of the people of Mecca and the surrounds were waiting for the Prophet to achieve some victory before following him.  God prophesises victory in this chapter and thus those who hung back were now having second thoughts.  God is telling Prophet Muhammad that when His tremendous help arrives there is nothing that will be able to stop or over power him.

Verse 2 The message is clear

After the conquest of Mecca, the Arab tribes that had resisted embracing Islam, the ones that were waiting for a victory, began to flock to Prophet Muhammad to pledge allegiance to God and to the religion of Islam.  Up until this time Prophet Muhammad was often filled with grief and emotional pain.  Although God had assured him otherwise Prophet Muhammad always felt as if he was responsible for everybody.  If they refused to believe and ended their lives in that state, he was sad and wished he had done more to save them.

In this chapter God is assuring Prophet Muhammad that he will see crowds of people accepting Islam.  God is saying that he will see these large groups in his lifetime.  Not just one person here and there but whole extended families and tribes, and not just a couple of tribes but many.  Prophet Muhammad seeing crowds of people entering Islam is not restricted to only those who entered Islam during his lifetime.  We know from many of his traditions that he saw the large number of believers that will stand gathered behind him on the Day of Judgment.  This verse however reassured Prophet Muhammad, eased his grief and had a very deep and profound impact on his personal life.

Verse 3 How to seek forgiveness

Prophet Muhammad and his followers are told to feel reassured, be calm, glorify and praise God.  The victory is God’s Alone.  There was never any doubt that it would end this way.  Stay close to God, glorify Him, then praise Him and after this, seek His forgiveness because He is always ready to forgive.  It is well reported in the traditions of Prophet Muhammad that after this chapter was revealed he increased his worship of God by spending longer hours praying, glorifying and praising Him, and seeking forgiveness many times a day.  His personal habits changed because of this verse.  Following the instructions in this chapter and emulating the behaviour of Prophet Muhammad is the key to making supplication to God.

It is also related in numerous authentic traditions that this chapter had great personal impact on many of the companions of Prophet Muhammad.  Many of them recognised that this revelation meant that Prophet Muhammad had completed his mission.  Throughout the stories of the prophets it is clear that once the mission is completed, the lifetime of the prophet is at an end.  Many of the companions were profoundly affected and this chapter reduced them to tears of grief.  These three short verses hold a wealth of information and knowledge that we have only just touched on in this summary.