Description: This chapter begins describing the worldly possessions that distract us from obedience to God and ends by telling us what the destiny will be for those who do not take heed. 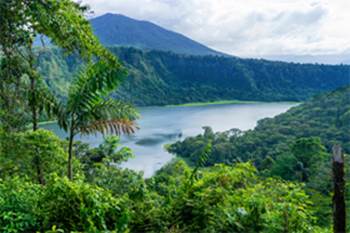 This is one of the short chapters found at the end of the Quran.  It is generally accepted that these chapters, which were revealed in Mecca, contain stern, sometimes violent, warnings with an emphasis on belief in God and the Day of Judgement, and descriptions of Paradise and Hell.  They were revealed during the first years of the mission of Prophet Muhammad, may the mercy and blessings of God be upon him, when ignorance and polytheism were at their peak.

The eight short verses of chapter 102 follow on from the previous chapter 101 The Crashing Blow, in which were told that certain people will find there eternal abode in the fires of Hell.  In this chapter we are told the reason why people will have such a terrifying end and God offers them advice.  This chapter takes its name from the first verse.

Verses 1 The piling up

The Arabic word used here is takathur meaning striving for more.  Many Arabic words have layers of meaning and this word, in this context, has several meanings.  Each meaning adds to the seriousness of God’s advice.  It means firstly, the desire to have a lot of things (including all of life’s distractions).  It also means competing with others to get a lot of things.  For example in these days it could mean wanting a better car then your neighbour, or a better house in a better neighbourhood, or to earn more money than your brother.

The third layer of meaning is taking pride in having all these things and being unable to resist telling people about your worldly wealth and possessions.  Bragging and boasting at every opportunity.    Lastly it means the cooperation between people to acquire more things.  This is a type of cooperation that easily crosses all barriers of religion, ethnicity or age.  It is mutual cooperation in piling up possessions or wealth.

Humankind has become so obsessed with acquiring things that nothing will put an end to it except death.  Once you visit your grave, the place where you will wait for the Day of Judgement, you will realise that you were distracted from the real purpose of life, which is to worship God.  Humankind is so busy striving for more and more things that there is little time for anything else.  Death is the only thing that will distract us and remind us that we should have been paying attention to the message.  God is advising us against chasing the pleasures of this world while forgetting about the next world.

When God repeats a warning it adds urgency to the situation.  When you die you will see the reality and understand and then again when you arise on the Day of Judgment you will again understand with certainty.  You will rise from your graves knowing that what you coveted and competed for was nothing but a distraction.  And it has now led you to a terrible conclusion.  You have wasted your life, it has slipped away.

God is saying that although you know what you should be doing, you do not know with the kind of certainty that would prevent you from frivolously wasting your life.  People strive for more and more because they want to be immortal.  They want to have more descendants, build a structure that lasts forever, and be remembered as the wealthiest or most handsome.  Wanting to go on forever in some form or another is a common human trait.  And we will live forever, but not here, not in this world.  God is saying that you should strive to know with certainty that there is a reward but it will not be found in the piling up of things.

On the Day of Judgment you will see the Fire and you will see it as if you were the prey about to be attacked by a ferocious lion.  You will stare into the Fire as if it is the eyes of the lion.  Even those who are not destined for the Fire will see it.  What you see with your own eyes you know with certainty.  It might seem that our final destination is a long way off but our life here is just a blip in God’s reckoning of time.  God is telling us exactly what is going to happen yet we continue to clutch at our belongings as if they can protect us from what is to come.

Humankind must understand and know with certainty that on the Day of Judgement they will be questioned about the pleasures and comforts that were blessings and bounties from God.  God will want us to explain how we used the resources that we were given.  Are you grateful for the comforts in this worldly life? God emphasises three times that you will be questioned.  As you pile up your possessions it is worth remembering that the more you have the more you will be questioned.  God will ask about the things you gathered and also about your continuous blessings such as, air, water food, seeing, hearing.