Description: God’s signs and blessings are everywhere.  Despite this some people worships things other than God. 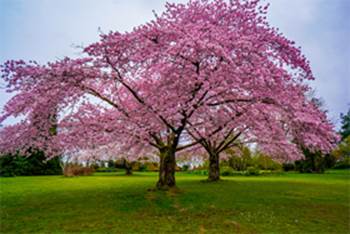 God sent down the blessed Quran as a warning to the people of Mecca and to the rest of the children of Adam, Arabs and non-Arabs alike.   Those who already believe in the Hereafter know it is the truth and will be steadfast in performing their prayers.  Telling lies about God and pretending to have received a revelation is wicked.  Anyone doing this will face extreme punishment and humiliation, not the intercession they had hoped for.  Their intercessors whom they associated with God will be of no help.

It is God who causes the seed to split and sprout, and brings out the living from the dead and the dead from the living.  He is responsible for the dawn and the night time, He made the sun and the moon so that humankind could measure time.  He made the stars as a light and a way to navigate the land and the sea.  The signs are clear for those who think.

God produced all of humankind from one soul.   He sends down rain to make the planet green; dates, vines, olives and pomegranates.  All vegetation is a sign.  However, even surrounded by the wonders and signs of God some people have made the jinn partners with God, others have fabricated sons and daughters.  How is this possible when He has no consort and is the Creator of everything? There is clear proof so believe it and have the advantage over those who refuse to see.  Prophet Muhammad, may the mercy and blessings of God be upon him, is not a guardian over those who refuse; he must merely turn away from them.

The believers must not to insult the gods of other religions because it might cause the polytheists to insult God.  In the end they will understand the error of their ways.  Sometimes the unbelievers swear that they would believe if they saw a sign, but the signs are all around them yet they refuse to see them.  Even if angels appeared before them or the dead spoke to them they would not believe.  God will abandon them to wander blindly in their wrongdoing.  Every prophet had enemies, so turn away from the disbelievers and what they have invented.

God is the Judge! Not the others that are worshipped instead of or besides Him.  He sent this Book (the Quran), and those who received scriptures before know very well that the Quran is the truth.  It cannot be altered.  Be mindful that most of the people are trying to turn you away from God however God knows who goes astray and who remains faithful.

Eat of that meat over which God’s name has been pronounced at the time of slaughtering of the animal.  The rules have been made clear and you know what is forbidden (except in times of dire emergency).  Remember you will be held accountable.  Do not eat meat upon which God’s name has not been pronounced, and be wary because many people and devils will cause arguments and disputes over this.

A person who is ignorant or obstinate and trapped in the darkness is not the same as one who is guided and walking in the light.  There are evil doers everywhere, they conspire and scheme but they are unaware that they conspire only against themselves.  They think they should be messengers but God knows best who to give His message to.  He guides whom he wills, he expands their chest so that they are filled with Islam but those who are abandoned (because they themselves did not wish for guidance) feel their chest constrict as if they were climbing into the sky.  The path to the home of peace is straight.

On the Day of Judgment the jinn and humankind who thought themselves allies in evil will be allies in punishment.  Their home is the Fire.  They will testify against themselves when asked whether they had received a warning.  God did not destroy civilisations without just cause and only did so after fair warning.  God can and will destroy people and replace them with others.   If people do not listen to God and instead do whatever they want God will respond.

Some of the polytheists give God’s share of their crops and livestock to those they wrongly associate with God.  This is an evil and bad decision.  Some people are so confused that they will murder their own children because of their strange beliefs.  They have many self-imposed restrictions that they wrongly attribute to God.  These lies and inventions will result in severe punishment.  The ones who kill their children or restrict food from them because of lies about God have gone completely astray.

It is God who causes vegetation to grow, so eat from its yield and pay the obligatory charity on its harvest.  He has provided animals too, some for transportation and some for slaughter.  Use them and eat from them.  There are strange superstitions surrounding the animals, they are more lies against God.  The things forbidden to eat are dead animals, blood spilled out, the meat from pigs (swine) and animals that were slaughtered in the name of something other than God.  The only exception is if someone is forced to eat this meat out of necessity.

The Jews had certain dietary laws concerning meat imposed upon them due to their disobedience.  Prophet Muhammad was told that if he was accused of lying about this then he should say that God is merciful and His argument conclusive.

This is what God commands.  Do not associate anything with Him.  Be good to your parents.  Do not kill your children because you fear poverty; God will provide for you and them.  Do not be immoral, openly or secretly.  Do not take a life except in certain justifiable situations.  Treat orphans fairly and give full measure and weight.  God never makes a person bear more than he is capable of bearing.  Speak justly and keep any promises you make in God’s name.

Moses was given a blessed Book and this Quran is also blessed.  If you follow it you will receive His mercy.  Those who turn away will face a dreadful punishment.  Leaving it until the Day of Judgment will be too late.   Those who fail to do any good deeds and those who divide the religion into sects will be called to account.  A person who does one good deed will be given credit for ten good deeds.  A person who does a bad deed will be recompensed for that one deed.

Prophet Muhammad declares that he is following the straight path of Abraham.  His life, his worship and his death are for God Alone.  God has no associates or equals.  And he (Prophet Muhammad) is the first among those who submit to God.  God is the Lord of all that exists and each soul will bear the burden of its own actions and never the burden of another.  In the end God will resolve all your disputes.  He has given you the earth and all its wonders.  Some have more than others; it is a test.  He is swift in punishment but is also forgiving and merciful.