Description: God tells Prophet Muhammad how to use the Quran, gives a strong warning against polytheism and Prophet Abraham ponders the universe and discovers the Oneness of God. 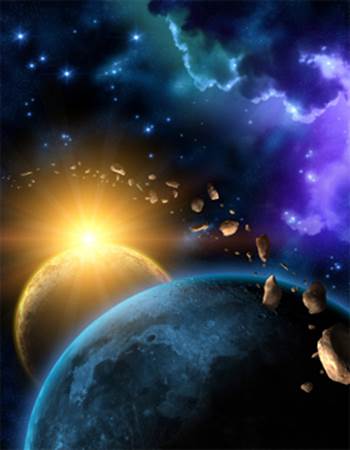 God tells Prophet Muhammad, may the mercy and blessings of God be upon him, to use the Quran to warn people that on the Day of Judgment nothing will stand between them and punishment, except God.  God further emphasises that the poor people who are true believers should not be ignored because of the rich influential people of Mecca the Prophet is trying to invite to Islam.  It would be very wrong to drive them away; remember that God has made some people as a means to test the resolve of others.  God knows those who seek to please Him and those who are grateful.  He is merciful and forgiving to those who repent from their bad deeds or mistakes and correct themselves.  The path forward should be made clear.

Only God knows the unseen, He knows everything that happens in the universe.  When the smallest leaf falls God knows about it.  There is not even a grain deep in the darkness of the earth that God does not know about and has recorded it in a Clear Record.  It is God who takes your souls at night when you sleep and returns them to you each morning to go on with your life.  In the end you will return to God and He will tell you everything about your life.

God reigns supreme.  He sends angels guarding and writing all of one's good and bad until death approaches.  At the time of death, the Angel of Death and his assistants - who never fail to do their duty - take the soul.  The souls are returned to God, who is swift in taking account and passing judgment.  In the midst of calamities and confusion people turn to God in silent terror asking for help or safety and promising to be thankful and grateful.  But when rescue comes they persist in worshiping something other than God.

It is God who has the power to send calamities from above or below or to surround you in confusion or violence.   This is explained in the revelations in various ways in order to make you understand, but still you reject the truth of the Quran.  When the end approaches you will understand.  Walk away from those who argue about the Quran; if Satan makes you forget then stop as soon as you realise and walk away.  The righteous are not held accountable for the wrongdoers but your actions might be a reminder to them.  Leave the company of those who take their religion as a game and those who are deceived by the life of this world.  However use the Quran to remind them that a damned soul will have a painful punishment.

The believers should ask the polytheists if they would benefit from calling on something other than God that can neither harm nor benefit them! Why would they turn their backs on God when they have been guided to the correct path?  Should they be like a person Satan has misled and left wandering in the desert while his friends call out to him from the correct path?  No! God’s guidance is the only guidance.  The believers have been commanded to submit and to establish the prayer and to be mindful of God for they will be facing Him on the Day of Judgment.  God created the universe for a true purpose.  On the day that He says "Be", it will be (the Day of Judgment).  When the trumpet is blown He will have all control and can see what is visible and what is invisible.

Prophet Abraham confronted his father about worshipping idols.  God showed Abraham the realms of the heavens and the earth in order to make him one of the true believers.  At night he saw a star and wondered if that was God but the star faded and he knew it was not God.  When the moon rose he looked at it and wondered if that could be God but it set and He cried out that if God did not guide him He would be one of the losers.  Then he pondered the sun and thought that it must be God because it was bigger and brighter, but it set.  Abraham knew at once that these heavenly bodies were creations from God and he turned his face away from idols and vowed to worship only the One God.

Prophet Abraham’s people argued with him but he knew that they could cause him no harm unless God willed it.   He asked them, "How can I fear what you have associated with God when you do not fear that you have associating partners with Him without any evidence?" Who should feel more secure? Of course it is those who fear God and associate nothing with Him.  This was the argument God gave Prophet Abraham to use against his people.  God raises the rank of whomever he pleases.

Abraham was given Isaac and Jacob and God guided them just as he had guided Noah.  Prophet Abraham’s descendants include many prophets; Moses, Aaron, Joseph, Job, David, Solomon, Zachariah, John, Jesus, and Elias, Elisha, Ishmael, Jonah and Lot.  All of them were righteous.  They were also all chosen and guided to the straight path.  If any of them had worshipped other than God their deeds would have become null and void.  Among them were those who were entrusted with a Scripture.  God tells Prophet Muhammad that these were the people who followed the guidance, so follow their guidance and tell your people that you are not asking for payment, only giving a reminder to the world.

These people do not value God; they say He never revealed anything to a human being.  Ask them who sent the Torah to Moses? It was a light and guidance but they made it into separate pages and kept some hidden.  It contained knowledge that they did not know about.  If they give no answer to your question leave them engrossed in their vain arguments.