Description: There is only One God.  Failure to see this reality will result in a very harsh and final reality on the Day of Judgment.  God gives warning after warning and invites us to think and to ponder. 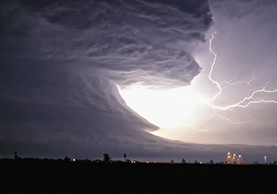 Chapter six of the Quran is called The Cattle; some translations use the more encompassing word livestock.  The title comes from the discussion about livestock in verses 136- 39.  This chapter of 165 verses was revealed in Mecca.  In a similar way to other chapters revealed in Mecca we find the emphasis on monotheism or the Oneness of God.  The name of God, Allah, is mentioned seventy times in this chapter, whilst idolatry and polytheism are strongly condemned.

Verses 1 – 10 The things you mock may become your reality

All praise belongs to God, yet disbelievers set up partners or equals to God.  It was He who created the heavens and the earth, the darkness and the light.  God created humankind from clay and appointed a time for death and a time for resurrection.  You know this to be true but still you doubt and disbelieve.  God is the only deity to be worshipped in the heavens and on the earth and He knows what secrets you keep, what you reveal about yourself and what you do.  The revelation comes but humankind rejects it.  Soon the things that were ridiculed will become the reality.

Many previous generations were destroyed.  They were firmly established and powerful yet they were destroyed because of their sins and replaced by others.  If Prophet Muhammad, may the mercy and blessings of God be upon him, had been sent with a scripture written on a page that the disbelievers could touch with their own hands they would still have called it magic.  They ask for an angel but if an angel had come into their midst he would have been in the form of a human bringing a judgment from which there would have been no respite.   Many messengers were ridiculed before Prophet Muhammad but in every case the scoffers themselves were surrounded and overcome by the things they mocked.

Look at the history of humankind and see what happened to those who denied the truth when it was revealed to them.  Everything in the heavens and the earth belongs to God the Merciful.  He does not punish you for your misdeeds right away, but you will be called to account; the Day of Judgment will arrive.  God tells Prophet Muhammad to let the people know that he has been commanded to be the first amongst them to submit to God and to not be one of the polytheists.

If God afflicts you with harm there is none that can remove it other than Him; if He blesses you with good, know that He has power over all things.  He is the Supreme Master, All-Wise and All-Aware.

Verses 19 – 30 A warning to liars and hypocrites

Prophet Muhammad calls on God to be the witness between himself and the disbelievers that he is a messenger from God and that the Quran has been revealed as a warning to whoever it reaches.  There are no gods apart from God and Prophet Muhammad tells the disbelievers he would never associate anything with God.  Those who have been given the Quran know this.  Whoever lies about God will never succeed.  When they are gathered before God and are asked about the ones they associated with Him they will continue to lie.

There are also some people who pretend to listen when Prophet Muhammad recites the Quran but God has veiled their hearts and blocked their ears.  They argue and call the Quran an ancient fairy tale; they turn away and encourage others to do so but they only harm their own souls.  If they could see what it will be like when they stand before the fires of Hell, they would beg to return to life and be amongst the believers.  The truth is, if they were sent back they would repeat the same mistakes and have the same end.  They are liars who deny the Resurrection.  When they stand before God they will see the reality of what they denied.  God will order them to taste the punishment for denying the reality.

The ones who deny the meeting with God are completely lost.  The Day of Judgement will arrive suddenly and they will carry a heavy burden on their backs.  The life of this world is nothing more than a brief interlude; games and distraction.   What will make you realise that it is the everlasting home in the Hereafter that is important? God knows Prophet Muhammad is grieved by the constant denial of the disbelievers.  They are not calling you untruthful, He tells Prophet Muhammad, they are denying the revelations from God.  Many previous prophets bore the rejection and persecution patiently, you know this God says, and you know that My help eventually arrived.  If it is too hard for you to bear then seek a way to bring them a better sign.  God could have made them all believers if it was His desire to do so.  Don’t be among the ignorant, think about this.

Only those who listen can hear the truth.  As for those with closed minds, even when they are brought back to life on the Day of Judgment they will be asking why they did not see a sign.  They do not understand the signs around them.  Look at the communities of birds and animals, they are signs.  Everything has been determined beforetime; nothing has been left out.  Those who reject the signs around them are deaf and dumb some even in total darkness.  God guides some and lets others go astray.  Have you considered who you will invoke when disaster or the fateful Hour descends upon you? It is only God that you will call; anything else you associated with Him will be forgotten.

Many previous nations were afflicted with suffering and adversaries in order that they may learn humility.  Prophets were sent to them, but they did not learn humility.  Instead they followed the tricks of Satan and ignored the warnings.  Good fortune followed and just as they were enjoying its fruits, God’s wrath descended and they were wiped out!

If God took away your hearing, your sight, or put seals upon your heart, who could give them back to you? God repeats His revelations in various ways for emphasis and clarification but still there are those who just turn away and refuse to see.  Have you considered who will be destroyed when the punishment from God comes? The prophets were sent to bring good tidings and strong warnings; anyone who listened to them has nothing to fear.  Those who persist in denial will be destroyed.  Prophet Muhammad does not possess the treasures of God, nor does he know what is hidden from humankind, he does however follow what has been revealed to him.  One who is blind is not the same as one who can see.  Ponder this.