Description: A stern warning to the disbelievers of a severe punishment, with examples from the prophets and people of the past, and a reflection of God’s bounty towards humankind. 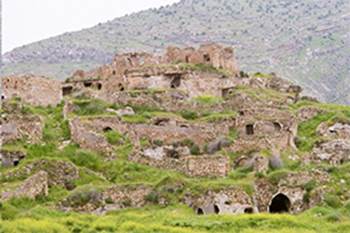 This is a Meccan chapter that is named after Prophet Abraham who prays to God in verses 35 to 41.  Throughout the chapter the ungrateful are condemned and the grateful praised and assured of their reward in the Hereafter.  The chapter is a warning to humankind and a cautionary tale for the disbelievers.

Twenty-nine chapters of the Quran open with a short combination of letters.  Chapter Abraham opens with the letters Alif, Lam, Ra.  The meaning of these combinations is known only to God.

This Quran was sent to Prophet Muhammad, may the mercy and blessings of God be upon him, so that he could use it to lead the people out of darkness and ignorance and into the light of God.  It immediately gives a stern warning to the unbelievers or those who hinder people from following the straight path.  The torment for those who have gone astray will be severe.  All the messengers speak in the language of their people so that the message is clear to them.  God will guide or send astray, according to His will.

Prophet Moses was also told to bring his people into the light and to remind them of their divine history, particularly the troubled times when they were living under the yoke of Pharaoh.  If they had been thankful and grateful God would have given them more but they were thankless to their own detriment.  God is self-sufficient and has no need of thanks.  Moses told his people that even if everybody on earth disbelieved, God would not be affected in any way whatsoever.

The message was denied and rejected by the people of Noah, and Ad and Thamud, as well as the people who came after them.  The messengers came with clear proofs of their truthfulness but they were disbelieved because they wanted the people to reject the false religion of their forefathers.  The messengers were only men and could not bring miracles according to the wishes of the people.  They only produced miracles which God gave them.  The messengers said that we put our full trust in God and will bear with patience all the hurt you may cause us.

Verses 13 – 17 The suffering of the disbelievers

The good deeds of those who disbelieve are like ashes blowing in the wind; they are unable to hold onto them and will not benefit them in any way.  The creation was designed for a purpose and God could wipe it away and bring another creation if He so desired.  When the weak appear before God they will call out for help to those who considered themselves mighty.  They will answer by saying if God had guided us we would have guided you, but there is no escape now whether we panic or bear it in silence.  Satan will tell them that God’s promise was true however he (Satan) deceived them.  They followed him (Satan) of their own free will.  Satan rejects those who followed him and they will face a severe punishment.

Those who believe and do good deeds will be admitted to Paradise, where gardens bloom and rivers flow.  Their greeting will be the word ‘Peace’.   In order that we may ponder and reflect, God compares a ‘good word’ with a good tree whose branches reach high into the sky, roots are firmly planted in the ground and it yields fruit every season.  A ‘good word’ could mean Islam or the statement ‘there is no deity worthy of worship except God’ and it is firmly established in the heart of a believer.  His good deeds ascend to the heaven all the time.  Likewise, a ‘ bad word’ is like a bad tree.  It is easily uprooted and has no endurance.  Words of disbelief have no basis and will not benefit the disbeliever is any way.  God keeps the believers firm but allows the disbelievers to stray where they will.

There are some people who have responded to the favors of God with ingratitude.  They cause others to end up burning in the fires of Hell by encouraging the worship of false gods.  Their pleasure will be in this life only for they have no hope of Paradise.  The believers must continue to pray and give openly and secretly now before it is too late.   The Creator sends down rain, causes the plants to bear fruit, and allows the ships to sail safely across the seas and the rivers to benefit humankind.  The sun and the moon and the alternation of the night and day – all created for the benefit of humankind.  Everything has been provided yet most of humankind is ungrateful.

Prophet Abraham implored God to keep the city of Mecca secure and to keep himself and his descendants free from the sin of worshipping idols.  He settled his family in the barren valley (Mecca) and prayed that they would establish the prayer and build a thankful community there.  God knows what humankind revels and what they conceal, nothing is hidden from Him.  Abraham praises God for the birth of his sons, Ishmael and Isaac, in his old age and asks for forgiveness for the believers on the Day of Judgment.

God knows exactly what the disbelievers do; He gives them respite until the Day when they will be staring around in horror.  Prophet Muhammad is asked to warn humankind of the Day when they will beg for respite again.  It will not be granted but they will be reminded that they were warned and presented with many examples of what would become of them.  They had plans but their plans were never hidden from God.

God will not break his promise to the messengers.  The people should be warned that a Day will come when the earth and the heavens will change into another earth and heavens and everyone who ever lived will stand before God.  On this Day the guilty will be bound together in chains, their faces will be aflame and their bodies will be covered in tar.  Everyone will be judged and every soul will get exactly what it deserves.

This Quran is a message for all the people.  It is a warning.  Let the people know that God is One and Alone.  Those who understand will be reminded.