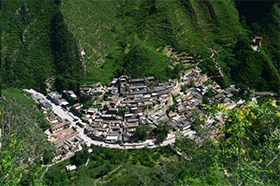 This is the first of three articles summarizing the third chapter of the Quran called Aali-Imran or The Family of Imran.  It takes its name from the story of Prophet Zachariah, Mary and her son Prophet Jesus, in verses 33 to 64.  The family of Imran was a blessed family that also included the Prophet Christians refer to as John the Baptist, thus this chapter has particular relevance for Christians and does indeed address itself to them.  The Family of Imran was revealed in Medina after the pivotal Battle of Badr and is in some ways a sequel to the previous chapter The Cow, or Al-Baqarah.  The Cow was addressed primarily to the Children of Israel (the Jews) and in the Family of Imran the invitation is extended to the Christians.  Thus the chapter begins by inviting the People of the Book (Jews and Christians) to the truth of Islam and goes on to warn the Muslims to take heed of the religious degeneration that plagued the two earlier communities.

The chapter opens with the same combination of letters that opened the previous chapter.  Alif, Lam, Meem.  These letters are from amongst the various combinations of fourteen letters that open twenty-nine chapters of the Quran.  God has never revealed any specific meaning attached to them.  The letters are immediately followed by praising God, the Living and the Eternal.  He is the One who has sent down the Quran to confirm the previous books, the Torah and the Gospel of Jesus.  It is a guide and a criterion between right and wrong, and anyone who denies this will suffer a severe penalty.  Be sure that nothing in the heavens and the earth is concealed from God.

Some verses are precise and others are open to more than one interpretation.  There are people who try to mislead others by seeking to find hidden meanings in the unspecific verses and no one knows its interpretation except God. But those firm in knowledge say, "We believe in it. All [of it] is from our Lord."

The possession of wealth or the number of children you have will not help on that momentous Day.  Disbelievers will be overpowered and gathered together in Hell.  The Battle of Badr was a lesson; the believers overcame twice their number because with God’s support you cannot lose.

The life of this world is full of temptations, the desire for beautiful spouses, children, gemstones and jewels, and expensive homes and transport.   However, what is promised in Paradise is even more desirable and beautiful.  Those who fear God will abide in gardens with flowing rivers.  The righteous are those who believe and ask for forgiveness and protection from Hell, they are steadfast, devout, spend in the way of God and pray before dawn.  There is no deity but except God (Allah), He is just and the true religion is devotion to Him Alone.

The People of the Book did not differ except out of jealousy and God is swift to call to account those who deny His revelations.  Prophet Muhammad, may the mercy and blessings of God be upon him, must tell those who argue with him that he and his followers are devoted to God and invite them to do the same.  If they refuse however, he has still fulfilled his mission to convey the message.

There will be a painful punishment for those who deny the revelations, kill the Prophets without justification, and kill those who order justice; they will be beyond help.  Those who were given one of the earlier revelations refuse to settle their disputes according to God’s commandments; they think the fires will not burn them.  They deceive themselves and will come to know the torment of the fire.  Praise God, the One who has power and control over all things.  He is the one who causes the night to change into the day and separates the living from the dead and gives provision to whomever He pleases.  God warns the believers not to seek protection from the unbelievers except for safety from tyranny.  Remember that God knows everything concealed or revealed, He has power over everything.  Fear retribution but know that He is compassionate to those who are devoted to Him.

Prophet Muhammad must tell the people to love and obey God and to follow him (Muhammad); if they turn away he must warn them that God does not love those who disbelieve or ignore Him.  God favors whom He wills - He chose Prophet Adam, Prophet Noah, the family of Abraham and the family of Imran from amongst those who were living during their times.

God was listening when Mary the mother of Jesus was born; her mother dedicated her to the service of God and sought protection for her and her children from Satan.  Mary grew to be a righteous woman and when she secluded herself in the temple, God provided her with all her needs, to the amazement of her guardian Zachariah.

Mary was an example to Zachariah who asked God to give him a righteous son even though he and his wife were old and barren.  The angels confirmed that this would be so but Zachariah asked for a sign.  God took away his power of speech for three days.  John was born, a son, destined to be a chaste leader and Prophet.

Mary, the mother of Jesus was chosen and exalted by God and her story is told to Prophet Muhammad from the unseen, it is something he (Muhammad) knew nothing about.  The angels told Mary that God would give her a son who would be honored in both this world and the next.  He will speak while still in the cradle and in maturity will be among the righteous.  Mary is overwhelmed and confused for she is chaste and unmarried but the angels explain that God has only to say "Be" and it is.  God will teach her son, Jesus, the Messiah, the revelations, the Torah and the Gospel and he will be a Prophet and Messenger to the Children of Israel.  Jesus will do amazing things; make a bird of clay and it will become real, heal lepers and cure the blind - all with the permission of God.  Jesus will confirm the Torah and make some things that were previously forbidden permissible.  This is a sign for those who believe.  Jesus will command his people to be mindful of God and to worship Him.

Jesus felt that many disbelieved so he asked them who would help him in God’s cause.  The disciples said, "We will help you in God’s cause, we believe in Him and testify that we are Muslims."