Muhammad & the Last Monotheists of Old

Description: Prophet Muhammad's mission was not only to bring the truth to an idolatrous world, but also to aid those few Hanifs and People of the Scripture who still clung to true monotheism. 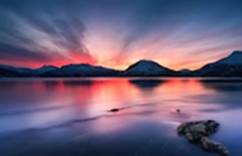 When Prophet Muhammad, may the mercy and blessings of God be upon him, was sent with God’s Message to humanity, his mission was not only to bring the truth to a world steeped in ignorance and idolatry, but also to come to the aid of those few people who still clung to true monotheism.  Some of them were from the People of the Scripture.  Others were from among the Hanifs[1] of Arabia who remained upon the true teachings of Abraham and Ishmael (peace be upon them both).

The message of Islam also came in support of all the previous messengers of God (peace be upon them).  This is part of the meaning of God’s statement: "We will without doubt help Our messengers and those who believe both in the life of this world and on the Day when the witnesses will stand forth." (Quran 40:51)  When Prophet Muhammad was sent by God in the heart of the Arabian Peninsula – the stronghold of idolatry and paganism – he was a lone man standing on one side with all of humanity standing on the other.  He was a stranger whose estrangement was total and absolute.

The difference between the severe estrangement that he faced and the estrangement experienced by the Hanifs like Zayb ibn Amr ibn Nufayl and those that remained of the People of the Scripture is that they were the remnants of what was before.  They were like the last golden rays of sunshine before the sunset that show from the tops of trees and buildings for a few fleeting moments before disappearing for good.

Prophet Muhammad on the other hand started out as a stranger but was a portent of the great good that was to come and of the success that truth and Islam were going to have.  He was like the first rays of sunshine that appear right before sunrise, foretelling growth, life, renewal, and glad tidings that after a few fleeting moments fill the sky with light.

Those monotheists that lived during the age of ignorance had resigned themselves to the way things were and despaired of effecting any reform.  The most any one of them could hope to do was to keep aloof from the customs, practices, and beliefs of the times of ignorance and possibly mention some point of truth to an assembly of people or maybe protect some oppressed person from injury.  This was definitely not a common practice of theirs, nor did they entertain in their hearts any notion of standing in the midst of their people and calling them to monotheism.

They cannot be faulted for this.  Anyone who studies their lives, their circumstances, and their poetry cannot help but to feel their greatness and hold them in the highest esteem for their probity and their willingness to seek out the truth and follow it in the dark and ignorant age in which they lived.  They were people who had the willingness to break free from and reject the norms and constraints of their environment.

And what a hostile environment it was.  Prophet Muhammad indicated how universal and absolute the corruption was at that time, encompassing all peoples and every aspect of life without exception.  Iyad ibn Hammar al-Mujashii relates that Prophet Muhammad said in one of his sermons:

Verily God looked at the denizens of the Earth and despised them, the Arabs among them and the non-Arabs, except for a few people who remained of the true People of the Scripture.[2]

In the face of such universal ignorance, true reform required a new divine message, a new mission and a new undertaking.  It needed a generation willing to make sacrifices to spread this message and the dedication to further what they believe in.  It needed a unique and extraordinary leadership possessing all the necessary and rare qualities to carry out such an endeavor.

That leadership came in the form of Prophet Muhammad, may the mercy and blessings of God be upon him, and his Companions who came after him.  Their generation was unparalleled, as it was molded by the guidance and teachings of God’s Messenger.  Their legacy is ours.  No matter how difficult our circumstances become in calling people to the truth, we are supported by God’s final Message, which He has preserved for humanity.

[1] Pre-Islamic non-Jewish or non-Christian monotheists who rejected idolatry in their society.

You could have continued this article for much longer. We take for granted the faith that comes to us so easily. The sacrifice and hardships to bring it to us are many times taken for granted. A great article!