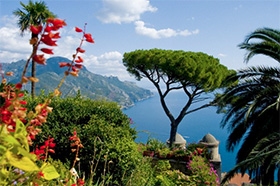 If God punished humankind for the evil that they do there would not be one person left on the earth.  Instead He gives them respite, until an appointed time.  It is a time that cannot be delayed or bought forward.  They attribute to God the daughters that they themselves dislike.  They think they will have a good reward but their reward is Hell and they will be among the first to be sent there.  The followers of Satan will face a painful punishment.  The Quran was revealed in order to make the things they argue about clear and it is a guidance and a mercy for those who believe.

God has sent down rain to revive the earth.  The cows produce milk and the vines and gardens grow wholesome foods of all kinds.  These things are a sign of God’s bounty; in them is a lesson to be learned.  And God created the bee, which feeds on all kinds of fruit and produces honey for the benefit of humankind.  It comes in many colours and has healing properties.  This is another sign for those who think.

God created you and it is He that will cause you to die.  Some people will live well into old age and will lose their faculties.  Some people have been given more provision than others and many of them do not share their wealth.  Is that a way of rejecting the blessings of God? God has given you spouses and children and grandchildren, yet still some people deny His blessings.  Those deities worshipped other than God have no power.

God gives examples.  Are slaves and those who have been provided with everything equal? Is a person unable to care for himself equal to one who is righteous and dispenses justice? The Day of Judgment is coming.  Babies emerge from their mother’s wombs knowing nothing but God provides them with hearing, sight and minds so that they can be thankful to Him.  God has made the birds able to fly without falling.  He provides humankind with shelter and warmth and everything you need for the term of your lives.  You have garments that protect you from the heat and the cold and other garments that protect you in battle.  He bestows the favours so that you will submit to Him.

Verses 82 – 89 The disbelievers will feel no respite

The Prophet’s duty is only to deliver the message.  Most people understand but are ungrateful and turn away.  On the Day of Judgment there will be a witness (their Messenger) from every nation.  Then it will be too late for excuses.  The disbelievers will see what awaits them and there will be no respite.  When the disbelievers appeal to their false gods, the gods will call them liars and disassociate themselves from the ones who worshipped them.  Those who disbelieve and prevent others from believing will have their punishment increased.  God will bring a witness from every nation and Prophet Muhammad will be the witness over the Muslims.  And the Quran has been sent down as guidance, mercy and good tidings.

God commands humankind to be just and behave with righteousness whilst being supportive of their relatives.  He forbids immorality and oppression.  This is a reminder.  Fulfil any oaths you take in the name of God, and do not deceive each other or conspire against others.  This is a test.  On the Day of Judgement the things you argued about will be made clear.

God could have made everybody one nation but He allows people to practice their free will – however you will be responsible for your actions.  Do not deceive each other or hinder other people from worshipping God.  To do so will result in a great punishment.   Do not break agreements and oaths.  Worldly things are transitory but what is from God is everlasting.  The righteous will have a new life in the Hereafter.  Whenever you recite from the Quran seek refuge in God from the accursed Satan.  Satan has no power over those who are submitted to God; his power only affects those who align themselves with him (Satan) and worship something other than God.

When God substitutes one verse for another they say that Prophet Muhammad has invented lies but they do not understand that angel Gabriel has brought the verses down piecemeal in order to gradually strengthen the believers.  They say that a human being has taught Prophet Muhammad the revelations but this Quran is in clear Arabic.  If people do not believe, God does not continue to guide them and a painful punishment will be the end result.  They love this world more than the Hereafter.  God has sealed the hearts, ears and eyes of the heedless, but those who must flee persecution or are compelled to say words of disbelief will feel God’s mercy and forgiveness.  Anyone who denies the correct faith willingly will feel the wrath of God.  On the Day of Judgement everyone will be dealt justly with and get what they deserve.

God presents an example of a town that was secure with provisions in abundance.  The people became ungrateful so they were afflicted with famine and fear.  They denied their Messenger and the punishment overtook them.  So eat from the good things God has provided and be grateful.  God has forbidden only carrion, blood, pig meat and that which has been dedicated to something other than God.  But if a person must eat these things out of necessity God will be forgiving.  Do not invent lies about what is lawful and what is unlawful because those who tell lies about God will have only a little enjoyment before the punishment overtakes them.

The Jews were prohibited certain things but it was not a hardship upon them, they turned it into a hardship.  God is most forgiving to those who do wrong out of ignorance and then repent.  Prophet Abraham is a good example, he was devout and obedient.  He was grateful and did not associate anything with God.  He had a good life and will be amongst the righteous in the Hereafter.  The Sabbath day was made obligatory because they argued and differed about it and on the Day of Judgment God will judge between them.

Call the people to God with wisdom and good advice.  Reason with them in a courteous manner.  God knows best who will be guided and who will go astray.  If you must retaliate make your response proportionate to how you were harmed, however it is better to be patient.  Prophet Muhammad is told to be patient and not to grieve or be distressed by the conspiracies of the disbelievers.  God is with those who are mindful of Him and have an attitude of righteousness.