Description: Proof of the Oneness of God, a refutation of polytheism and a warning. 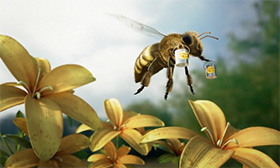 An-Nahl is the 16th chapter of the Quran. It is named after the bee mentioned in verses 68 and 69.The bee is one of many examples mentioned in this chapter of God’s grace towards His creation. An-Nahl was revealed in Mecca and contains 128 verses. Up to verse 88 its contents are addressed to the idolaters and polytheists. In the concluding verses Prophet Muhammad and his companions are instructed how to act in the face of antagonism and persecution.

Verses 1-9 There is no true deity but God

The Day of Judgement is coming so do not be impatient to experience it.  God sends down angels to inspire some people to warn others that there is no true deity but God.  Fear Him for He is far above anything they associate with Him. People are created from a tiny drop of sperm but soon they become strong and openly challenge God. For the benefit of humankind God created cattle for food, clothing and to carry burdens. He also created horses, mules and donkeys to ride and other things that are beyond the comprehension of humankind.  For some, God distinguishes the right path from the wrong paths and He could have done this for everybody had it been His desire to do so.

God sends down rain. It provides drinking water and it nourishes crops and fruit including olives, date palms and vines. This is a sign for those who ponder. God has made the day, the night, the sun, the moon and stars for the benefit of humankind. These are signs for those who think. The Earth is filled with things of many different colours; these are signs for those seeking to learn a lesson from them. God has made the sea for the benefit of humankind; it is a source of food and adornment.  Ships to sail through it so that humankind may seek God’s bounties and perhaps give thanks.  God has also set the mountains firmly into the earth to prevent it from shaking and He has made rivers and paths with landmarks and stars to guide people through the lands.

This is a reminder of His power and generosity and if a person wanted to count all the blessings that God had sent down he could not do so. God is Forgiving and Merciful and He knows what people keep hidden. The deities that are invoked along with God are unable to create anything for they are creations themselves, who do not even know when they will be resurrected.

God is One, those who do not believe in the Hereafter are arrogant and their hearts contain no faith. God does not like the arrogant because He knows what they keep hidden and what they say or do openly. When they are asked about what God has revealed they say that it is nothing but fairy tales from the old days. On the Day of Resurrection they will bear their own burdens plus some of the burdens of those they led astray.

People from earlier times felt the punishment come upon them from out of nowhere. On the Day of Judgment they will be humiliated once again. Those with knowledge know that it will be a day of misery for the disbelievers. Those who die doing wrong will deny their wrongdoing but God is aware of what they were doing. So they enter Hell and will remain there in the evil home of the arrogant.

Those who feared God and were righteous will be asked about what God sent down and they will describe it as good. There are rewards in this world for the righteous but their home in the Hereafter is even better, it is an excellent abode. They will be rewarded with gardens under which rivers flow and they will have whatever they desire. When the pious people die the angels greet them with words of peace and show them into the gardens of reward.

God was not unjust to the disbelievers, they were unjust to themselves. They will be struck by the consequences of their actions and will be swallowed up by what they used to mock and ridicule. Those who face the punishment say they would have worshipped God alone if that is what God had willed; their forefathers said that too. Messengers were sent to every nation and their only duty was to warn. If anyone travels through the earth they can see what happened to those who did not heed the warning. Those who God led astray cannot be guided. God’s promise to raise the dead to life is true. Everything will be made clear and the disbelievers will realise how wrong they were. When God intends anything to happen He need only say, "Be", and it is.

Those who had to leave their homes in order to worship God will find a home in a good place but the home they have in the Hereafter will be even better. A very happy end awaits those who are steadfast and put their trust in God. All the messengers God sent were human beings, the people of the scripture (Jews and Christians) know this, so ask them if you need to. Now this Quran has come so that Prophet Muhammad can explain things clearly and the people can think and reflect. Are those who do wrong really sure that the punishment will not come upon them suddenly, or perhaps it will sneak up on them gradually. The disbelievers have not truly reflected on what God has created - everything humbly fulfilling its purpose, fearing God and doing what He commands.

God says do not worship two deities because there is only One God and He has dominion over everything in the heavens and the earth. All blessings are from God and it is to God that the distressed person turns. Yet as soon as the relief comes some people turn to something other than God. There will be consequences for the ingratitude. Even the sustenance God provides is sometimes spent on false deities but anyone who does this will be called to account. They wrongly say that God has daughters but they themselves want to have only sons. When the birth of a female child is announced the father is consumed with grief and has to decide whether to bear their perceived humiliation or bury the girl alive. Those who do not believe in the Hereafter set the worst example to follow.