Description: The characteristics of a believer, the punishment that awaits the disbelievers and those who distract the believers from worship, wise advice and the ultimate power of God. 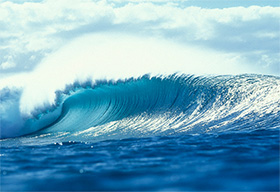 Chapter 31 of the Quran is 34 verses in length and called Luqman. It is named after the sage Luqman, whose advice to his son features in verses 13 to 19. The chapter opens with a description of the believers and strongly condemns those who attempt to lead others astray. Luqman was revealed in Mecca at the height of the Muslim persecution and the young Muslims are extolled to disobey parents when they try to lead them away from Islam. The disbelievers are warned about the consequences of their actions and Prophet Muhammad, may the mercy and blessings of God be upon him, is told not to be saddened by their actions.

These are among the fourteen opening letters which occur in various combinations at the beginning of twenty-nine chapters of the Quran. Throughout the centuries there has been much speculation as to their meaning however God never revealed that any specific meaning is attached to them.

These are the verses of the Quran. It is guidance and a mercy for those who lead a God-conscious life and with the Hereafter as their main focus. These are the ones who will be successful. However there are some people who are without knowledge and pay for distracting tales to lead others away from God. Those who distract a believer will find a humiliating torment waiting for them. When the verses are recited they turn away disdainfully as if the words are nothing but heaviness in their ears. God repeats His warning saying; tell them there will be a painful torment.

Those who believe and do righteous deeds will stay in Gardens of bliss. It is a truthful promise for He is Mighty and Wise. He created the heavens without visible pillars, set the mountains upon the earth firmly so that they will not shift and spread animals of all sorts throughout the earth. He sends rain from the sky that causes all sorts of vegetable life to grow. This is the creation of God; what have others that you worship created!? The disbelievers are clearly in error.

God says that He gave wisdom to Luqman so that he would be grateful. Whoever is grateful and gives thanks to God does so for his own welfare. Those who are ungrateful and deny God’s favors upon them should understand that God has no need of their thanks. Luqman counsels his son saying do not attribute partners to God, it is a terrible error.

God commands that people be good to their parents, their mothers carry their offspring with great difficulty and usually feed them from their own bodies for two years.  God associates gratitude towards Him with gratitude towards parents.  He says be grateful and obey them but stresses not to obey them when they ask you to commit the greatest sin of associating others with God.  We should not obey them in matters that go against the commandments of God, and do what is right, but at the same time we are expected to treat our parents with care and respect.

Nothing can escape God’s knowledge says Luqman to his son.  Even if it is as small as a mustard seed, or hidden inside a rock or is a minute speck in a vast universe, God can see it clearly and is able to expose it.   Luqman then advises his son to lead a moral and upstanding life and tells him how; establish the prayer, enjoin the good, forbid the evil and bear the trials and afflictions of life with patience.  Do not turn your nose up at people contemptuously; do not walk about the land arrogantly for God does not like the boastful.   Thus walk at a moderate pace and talk in a low voice because God does not like harsh voices like the braying of donkeys.  This is all sage advice for moral behaviour and interaction between people.

God asks, do you not see that everything in the heavens and earth is for the benefit of humankind.  It is self-evident but there are still those who would argue about it.  When they are told to follow God’s guidance they respond by saying that they will not but will instead follow the path trodden by their forefathers.  They say this even when Satan is inviting them to step into the Fire.  Those who submit to the will of God and live a righteous life have grasped the most trustworthy handhold, because the outcome of every matter is with God.

If they disbelieve, do not let it grieve you (O Muhammad) for to Us (God) is their return and We will then inform them of the reality of their deeds. God knows what their hearts contain. We (God) grant them enjoyment for a little while but in the Hereafter they will be driven to an unrelenting punishment. If you ask them who created the heavens and the earth they would say ‘God’, but then they associate partners with God in worship. By acknowledging that God is the creator of everything, and then worshiping created objects, they establish proof against themselves! God is the Creator and Owner of all that is in the heavens and the earth. He needs nothing from His creation and is the Only One worthy of praise.

If all the trees on earth were pens, and the oceans were ink, replenished by seven more oceans, the writing of God’s Words (signs and creations) would not be exhausted. It is as easy for God to create and resurrect every living being as it is to create and resurrect a single soul. God is All-Hearing and All-Seeing. Do you not see that God makes the day follow the night, one after the other, over and over in a precise pattern? The sun and the moon also spin in their orbits according to God’s plan. God knows very well what you do. God is the truth and what they call upon besides Him is falsehood. He is the most High and the most Great.

The ships sail through the ocean by the grace of God. Surely there are signs in this for any grateful person. When the waves loom over them they call out to God with sincere devotion but when He (God) brings them safely to land some falter between belief and disbelief. O humankind, fear your Lord and fear the Day that no family member will avail another family member. Do not let the life of this world delude you or let Satan deceive you. It is God alone who has knowledge of the Hour and sends down the rain and knows what is in the wombs – nothing escapes His knowledge. We humans don’t know what will happen the next moment; God knows all this and is aware of everything.