Description: This chapter tells us that God is the Most High and it is He who creates, proportions, determines and guides. 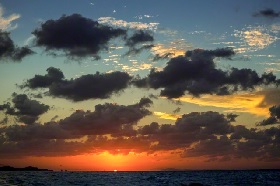 Prophet Muhammad, may the mercy and blessings of God be upon him, used to love this chapter of the Quran.  We know this from a chain of narration dating back to his friend, cousin and son-in-law, Ali ibn Abi Talib.[1]  Al A’la and the previous chapter At-Tariq were often recited together by Prophet Muhammad in the prayer on Fridays or the Islamic feast days[2].   It is a short chapter of 19 verses revealed in Mecca and it brings Prophet Muhammad good news.  God will help him in his mission to spread the word of Islam and will personally take responsibility to make sure Prophet Muhammad’s memory of the Quran will not fail or be impeded in any way.  Al-A’la includes the basic foundations of Islam and affirms that these foundations have well established roots in the previously revealed messages.

The chapter opens with an order to glorify God.  Glorify the name of your Lord the Most High.  The name of the chapter Al-A’la comes from this first verse.  To glorify means to praise and to recognise His omnipotence.  In just a few words we are immediately presented with two of the attributes of God; His Lordship and His Greatness.  It is He who has created and proportioned.  Everything that God created is well proportioned and perfected for the role it is to play in life on this earth.  God has determined and set the destinies.  Every piece of creation is given the sustenance it needs to fulfil its purpose and is guided to what it requires.

After the glorification of God the imagery changes to a scene from the world of plants.  God is He who brings forth the pasturage and then turns it into withered grass.  Every plant has a purpose both in its flowering when it first shoots forth and in the withering and dying.  All conditions have a purpose.  Consider soil regeneration.  Soil has its own self regenerative process; that which is biologically dead gathers minerals to begin the process once again.[3]

Verses 6 - 7 Prophet Muhammad will not forget

God addresses Prophet Muhammad saying that He will make him recite the Quran and he (Prophet Muhammad) will not forget.  Forgetting is a human trait but Prophet Muhammad does not have to worry about trying to memorise the revelations as they are sent down to him.  God has promised that He will take the responsibility and ensure that none of the revelations will be lost.  These are glad tidings for the Prophet and for the Muslims in general.  Its preservation is a bounty and favour from God to humankind.  God’s decisions are based on his unfailing knowledge of everything.

This is quickly followed by more good news.  God will smooth Prophet Muhammad’s way.  God says, "We will ease you towards ease".  This is either the path to Islam, which is invariably easy and natural or the path to Paradise which is by way of Islam.  The universe was created by God with ease, it follows its appointed way with ease and draws towards the final objective with ease.  It is well known that throughout his life Prophet Muhammad always chose the easier of lawful alternatives to any situation he was in.[4]

The religion of Islam takes care to make the path to Paradise easy for every human being who lives in harmony with the universe.  Prophet Muhammad is told to remind everyone, if reminding will help or be of some benefit.  There will always be, in every place and in every generation those for whom the warning will be useful.

Those who heed God will take the reminder but it will be ignored by the wicked and they will burn in the fires prepared for them.  The unfortunate ones will enter into the greatest fire where they will neither die nor live.  They will not be granted the respite of death, nor will they be able to enjoy their present state of life.  The one who turns away and does not listen to the warning must surely live in constant worry striving to attain pleasures in this life and trying to ignore the reminder of what will come.  The greatest fire is the fire of Hell and the suffering in it is endless.

The one who heeds the warning, and purifies himself, will be successful.  God asks us to listen to the message and purify ourselves from everything sinful act.  This is achieved by remembering God and praying.  God points out the vast difference between the two options.  Heed the message and be saved, ignore the message and be wretched.  Then He points out the reason for failure.  You people prefer the life of this world even though the Hereafter is better and longer lasting.

This chapter concludes by pointing out that the message of Islam is not new.  In fact it goes far back in time.  God says this is the message delivered in the scriptures given to Prophets Abraham and Moses.