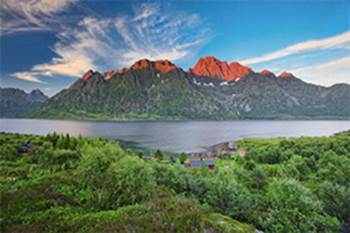 This is a short chapter revealed in Mecca and found towards the end of the Quran.  It has twenty six verses; the first 7 serve as a warning to the disbelievers.  The dire warning is then contrasted by a description of the pleasures and delights the believers will attain in Paradise.  Next God asks us to consider the creation.   That is followed by Prophet Muhammad, may the mercy and blessings of God be upon him, being absolved from responsibility for those who will not listen to the warning and heed his message.

The title, Al-Ghashiyah, or in the English language, The Overwhelming Event, comes from the first verse.  The Overwhelming Event is another name used for the Day of Judgement.  The Arabic word ghashiyah means something that covers entirely.  Thus this overwhelming event will both overwhelm and cover the entire earth.  As with many of the chapters in the last part of the Quran the themes are the Oneness of God and the Hereafter.

God asks, "Has the news of the Overwhelming Event reached you?" This is a rhetorical question and it is directed to everyone who hears or reads these words.  It is a reminder and yet another way to describe the events on the Day of Judgment and the reward or punishment that awaits all humans in the Hereafter.  Thoughts and descriptions of the event arouse fear.  On that Day there will be downcast faces.  These are people who believed they toiled hard in this world but now see no good result for their actions.  There deeds were not accompanied by faith or done for the sake of God.  Thus their works have been rendered worthless.

Once they have entered Hell, thirsty and exhausted, they are given nothing to appease that thirst except water from a boiling spring.  Their food is no better.  It consists of bitter dry thorns that do not nourish them or satisfy their hunger.  It is an ultimate affliction whose true and terrible nature is almost incomprehensible except to those who will experience it.

In stark contrast to this, other faces on this Day will show pleasure and happiness.  Some people will be radiant with bliss and they will be well pleased with their efforts.  These people will be shown into an elevated Garden.  They are happy, reassured and enjoying the feeling of both spiritual and physical satisfaction.  In this Garden they will hear no vain or evil talk.  They will not use nor will they hear any unsuitable speech whatsoever.  Within this lofty Garden will be a flowing spring and the description of water flowing implies fresh clean water.  They will recline on raised couches.  Filled goblets will be placed before them and comfortable cushions will be arranged with beautiful carpets underfoot and spread around.

The descriptions of Paradise are both sublime and brilliant.  The senses are satisfied.  They will have their thirst appeased.  The décor is luxurious and appeals to the eye.  However, once again the true nature of this reward is incomprehensible except to those who will experience it firsthand.  These descriptions help us to imagine the ultimate reward for those who strove for the Hereafter.

When the warning and description of the Hereafter comes to a close, the chapter goes on to refer to the present world.  We proceed to a reminder of the perfect planning and power of God.  Do they not look at how the camels are created? Or look at the sky and how it was raised high? What about the perfection of the mountains firmly set in place or the earth spread out? We are given a scene from the universe of an elevated heaven and an outstretched earth and asked to ponder.  Consider this.  If God is able to create these wonders of the universe why would the Hereafter not be real? Consider the opening verse.  Has the news of the Overwhelming Event reached you?

God says to Prophet Muhammad, "Warn them".  He is told his only task is to warn the people; he is not able to control them.  Prophet Muhammad is the admonisher who reminds them of the future and of the consequences of their actions, but he is not the enforcer.  There is no compulsion in religion; to heed the warning or not or to believe or not to believe is a choice given to humankind.  However they are accountable for their deeds and those who turn away in disbelief will be punished.  In other words Prophet Muhammad is told that once his obligation to warn is complete God will take it from there and punish those who have knowingly turned away.

Finally God says, "Indeed to Us is their return and then indeed upon Us is their account".   To God is the final return and a final accounting or reckoning will take place.