Description: A short powerful chapter that guides us through the wonders of creation and asks us to ponder and heed the message. 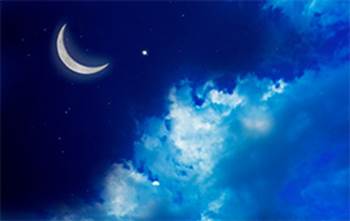 This is one of the short chapters found at the end of the Quran.  Some of these chapters contain stern warnings to the reader.  Think.  Reflect.  Ponder.  Consider.  It was revealed in Mecca at a time when the disbelievers were doing everything in their power to defeat and disrupt the message brought by Prophet Muhammad, may the mercy and blessings of God be upon him.  The Night Visitor takes its name from a word in the first verse.  There are seventeen short verses that discuss two themes; that man must appear before God and that the Quran is the decisive indisputable word of God.

There is a watcher over every soul.   God watches over every star in the galaxy and every human being.  The stars in this instance can be thought of as evidence to the fact that each soul has a watcher, an angel guarding them.  Generally the scholars do not think of this in the same way western literature thinks of an angel watching and protecting a person’s every move.  Rather it is more like an angel to watch over the recording of deeds.

Humankind is then asked to consider how he has been brought into existence.  God says reflect deeply about your own creation.  Each life begins from fluid ejected.  Life begins, God says, from what gushes out.  This is consistent with the imagery of the chapter.  Just as the star pierces through the darkness the fluid of life gushes forth.  Ponder the miracle of human existence, a fluid ejected and then a life emerging fully formed from between the backbone and the ribs.

God asks us first to look around, outside ourselves and ponder the wonders of the universe then He asks us to look inside, to contemplate the wonders involved in the creation of a human being.

God is certainly able to bring a human being back to life after death.  On the Day of Judgement, sometimes called the Day of Resurrection, human beings will emerge from the grave.  On that Day secrets will be laid bare.  The rhythm and images continue.  The light pierces, the fluid gushes and now the earth splits.  What has been created once can surely be created again.  On that Day the human being will have neither power nor someone to help him.  When the secrets are examined people will not be able to escape the consequences of their deeds by their own power, or with help from somebody else.

Now God swears another oath.   He swears by the sky that sends down rain and by the earth that is forever bulging with new growth.  When the rain comes, it penetrates the earth however it soon dries out.  The water evaporates and then returns to earth in the familiar water cycle.  The rain is recurring and the earth cracks open over and over again for plant life to emerge.  Every plant that appears has ripped open the earth; another impregnation that pierces and gushes forth.   The rain gushes forth and the plant life pierces the earth.   This is a serious task and so too is the Quran.  It is also sent down and the truths it contains are not play or jest - they are a stern warning of an unavoidable reality.  It is decisive and not to be taken lightly.

God say that they (the unbelievers of Mecca) are plotting and scheming.  They are devising whatever plots they can to defeat the message of the Quran.  They are creating doubts in people’s minds and making false statements about Prophet Muhammad.  God is also plotting.  He is planning that none of their devices will succeed.   They will be utterly defeated.  God has a plan that will overtake and obliterate all of their plans.  Do not be hasty in revenge He tells Prophet Muhammad; leave them alone for a while and you will see what becomes of them and their schemes.  Do not be angry, deal with them gently for God has it all in hand; for He alone holds the power in the beginning and in the end.