Description: Attention is drawn to ignorance and deviation and their consequences.  The people are warned not to behave like the people of the past whose civilisations were destroyed. 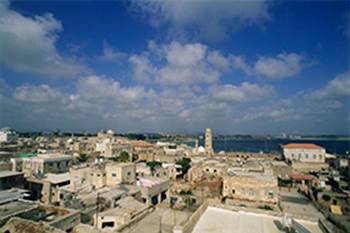 Instruction from God has been given to humankind; it is a mercy, a cure, and guidance.  Tell them, Prophet Muhammad, may the mercy and blessings of God be upon him, that these things are a blessing and better for humankind than all the riches of this world that they try to accumulate.  Ask them to think about the provisions that have been sent down by God.  He has made some lawful and others unlawful, why then do some people change the rules and try to make the illicit permissible? Has God given permission for this or are you inventing a lie about God? How will this be dealt with on the Day of Judgment? Think.  God is indeed full of grace towards humankind but most people are ungrateful.

Whatever matters people are engaged in, from reading the Quran to the mundane, God is a witness to it and it is all, the large and the small of it, recorded in a book.  Not even a speck, the weight of dust escapes God’s knowledge, and it is kept in a clear record.  For those who believe and fear God there will be no fear; they will receive good tidings both in this world and the Hereafter.  God tells Prophet Muhammad not to let the words of the unbelievers grieve him.  God is All-Powerful; All-Hearing and All-Knowing.  Everything in the heavens and on the earth belongs to Him.  Those who call on other than God are following only assumptions and lies.  God made the day and the night and surely this is a sign for those who listen to the message.

Verses 68 – 70 The consequence of lying about God

Some people say that God has a son.  He is free of all needs, the master of the heavens and the earth.  They have no authority to make such a claim, why do they invent lies about God? Those who lie about God will not succeed, they may have some brief enjoyment in this world but in the Hereafter they will face severe punishment.

Tell the people about the story of Noah.  He said to his people, "If my presence among you reminds you too much of that which you do not wish to hear about God’s signs and warnings then do what you will.  But let it be clear and decisive.  Remember however that I have not asked for any kind of payment, my reward is from God alone.  I am among those commanded to worship Him Alone."  They did not listen, they rejected Noah.  God saved him and those with him in the ship.  Those who denied the signs were left to drown.

Then God sent others, each to their own people.  They came with clear evidences but the succeeding generations were persistent in their disbelief.  Moses and Aaron were sent to Pharaoh and his people but they behaved arrogantly towards them and their message.  Moses said, "Do you think I bring you magic; because magicians will never succeed." Haughtily Pharaoh called for all the magicians in the land and Moses exposed the worthlessness of their magic.  God does not promote the work of mischief makers.

Nobody believed Moses except some of the youth amongst his own people; most of the people were too scared of Pharaoh’s regime.  Moses asked the believers to put their trust in God and they prayed to Him to release them from the hands of the unjust people.

God revealed to Moses and Aaron that they should take their people to Egypt where they would build their houses and establish the prayer.   Moses then prayed that the wealth and splendour of Pharaoh’s people be taken away from them.  Obliterate their wealth and harden their hearts he asked.  God said that this prayer would be answered and told Moses to remain steadfast.  So Moses led his people across the sea; Pharaoh and his soldiers pursued them until they were drowned.

At the very last minute Pharaoh said that he believed in the God of Moses and that he submitted to Him but God replied, "Now?" God saved his body but not his life so that he may be a sign for those that come after him.  Many people still fail to heed the signs.  The people of Moses were settled in a good place and were provided with the things required for a good life.  They did not differ amongst themselves until after knowledge had come to them but on the Day of Judgment God will judge between the things they failed to agree on.  Prophet Muhammad had complete certainty in that which was revealed to him.   Even if the People of the Book do not give heed to your call, they will still find evidence of you in their books.

There are many for whom the love of this world has sealed their hearts and eyes.  They cannot see the signs in front of their faces.  They will not believe.  No town ever saw the scourge then believed and it profited them except for the people of Jonah.  When they believed the punishment was removed, and they had enjoyment, for a time.  If God had so willed all the people on the earth would have believed.  Prophet Muhammad is asked if he would compel the people, against their will to believe.  Belief comes only by the will of God and He disgraces those who will not use their common sense.  Tell the people to see the signs in the heavens and the earth but no signs will convince those who will not believe.  God asks the question, "What are they waiting for?" In the end God will save the messengers and the believers, that is God’s way and He says that it is only right that He saves those who believe.

Prophet Muhammad is commanded by God to say, "People, doubt my religion if you will, I will never worship those you worship other than God, but I worship God who will cause you to die, and I am commanded to be a believer".  He is further commanded to dedicate himself to the religion and not to be amongst those who associate others with God.  God says you will not pray to others because they cannot benefit or harm you and if you do you will surely be one of the losers.  If God afflicts you with a calamity, none can remove it but He; and if He intends to bestow a favour, none can withhold His bounty.  He bestows it on whoever He pleases; He is the Forgiving, the Merciful.

Prophet Muhammad is further told to tell the people that the truth has come.  Whoever chooses to follow the right path does so for his own benefit and whoever strays does so at his own risk.  I (Muhammad) am not set over you to oblige you for guidance.  God tells Prophet Muhammad to follow what has been revealed to him and to be patient until God judges.  He is the best of judges.