Darwinism Versus the Octopus: An Evolutionary Dilemma

Description: The presence of similar complex structures in unrelated creatures poses a great dilemma for evolutionists. 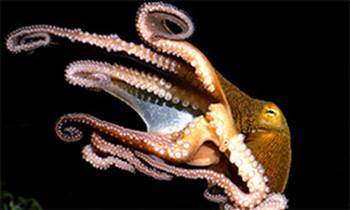 What’s the difference between evolutionary theory and an octopus? Well, one is a slippery, color-changing escape artist that can get out of any tough situation and the other is an aquatic invertebrate.

But seriously.  One of the biggest problems for neo-Darwinists is the origin of complex structures that appear suddenly in nature or the fossil record.  My friend Dr.  Stephen Meyer talks about this in his wonderful book, "Darwin’s Doubt." He points out how, in the so-called "Cambrian Explosion," the majority of animal phyla on earth appeared suddenly, and without obvious ancestry—almost as if they "exploded" onto the scene out of nowhere.

But for evolutionary biologists who adhere to strict naturalism, living animals pose an even greater problem: Things like powered flight, the so-called "camera eye," and advanced brains defy reduction.  That is, they’re so complex that you can’t make them simpler without breaking them.  Yet scientists tell us that many of these structures arose by themselves not once, but many times! And here is where the octopus comes in.

A study published in the journal "Nature" describes how researchers sequenced the octopus genome and found something surprising.  Compared with other invertebrates, the DNA of the octopus was "alien": nothing like the genetic codes of what they thought were similar animals, like clams and sea snails.

Now, octopi aren’t from another planet, but they are, figuratively speaking, out-of-this-world.  They can change color and texture, they use ink to make a quick getaway, and they’re shockingly clever.  They can unscrew jar lids and squeeze their soft bodies through just about any opening.One nineteenth century naturalist tells of an octopus climbing out of its tank, ambling across the room to a neighboring tank, and gorging itself on fish before returning home!

The key to this uncanny intelligence is the octopus’ so-called "alien" nervous system, brain, and eyes.  But these features are not alien to the animal kingdom at all.  In fact, they’re quite common in higher vertebrates.  The octopus genome shares key similarities with ours, including the development of high-powered brains and "camera eyes" with a cornea, lens, and retina.

Now here’s the problem for evolution: according to Neo-Darwinists, we’re not related to octopi—at least not within the last several hundred million years.  That means all of these genes, complex structures, and incredible capabilities came about twice.

The researchers who sequenced the octopus genome call this "a striking example of convergent evolution," or the supposed tendency of unrelated creatures to develop the same traits in response to environmental pressures.  Isn’t that just a fancy way of saying a miracle happened twice?

But the octopus isn’t the only such miracle.  "Convergent evolution" is all over nature, from powered flight evolving three times to each continent having its own version of the anteater.  Think about that.  As one delightfully un-self-conscious "Science Today" cover put it, convergent evolution is "nature discover[ing] the same design over and over." Well, good for nature!

But as Luskin argues, there’s a better explanation for a tentacled mollusk having a mammal’s brain and human eyes.  And that explanation is common design by an intelligent Engineer.  And like all good engineers, this this one reused some of His best designs.

But hopefully knowing a more straightforward explanation leaves you forearmed—or should I said "eight-armed"?

In future truth will come out:inshaullah