Description: These profound verses encourage us to have the right company and explain about the reality of our choices and actions.  The truth and has been made clear by God and we have been given a free will to choose; however we are responsible for the consequences of our decisions.

And keep yourself patient [by being] with those who call upon their Lord in the morning and the evening, seeking His countenance.  And let not your eyes pass beyond them, desiring adornments of the worldly life, and do not obey one whose heart We have made heedless of Our remembrance and who follows his desire and whose affair is ever [in] neglect.  And say, "The truth is from your Lord, so whoever wills – let him believe; and whoever wills – let him disbelieve." Indeed, We have prepared for the wrongdoers a Fire whose walls will surround them.  And if they call for relief, they will be relieved with water like boiling oil, which scalds [their] faces.  Wretched is the drink, and evil is the resting place.  Indeed, those who have believed and done righteous deeds – indeed, We will not allow to be lost the reward of any who did well in deeds.   (Quran 18:28-30) 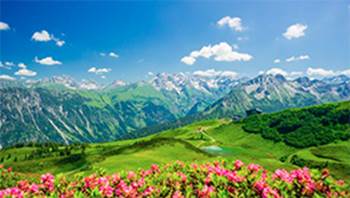 In this article we will discuss three essential verses from Chapter 12 of the Quran.  This chapter is entitled Al-Kahf or in English, The Cave.  It was revealed in Mecca at a time when the fledgling Muslims were being persecuted and abused.  Migration to Ethiopia had not yet taken place.  Thus, this chapter served as comfort and encouragement to people who were at the end of their tether, dealing constantly with abuse.  The Cave is a chapter that deals extensively with the Oneness of God and verses 28 -30 tell us that the Hereafter is real; however belief in the doctrines of Islam is a choice.  Be warned though, actions have consequences.

And keep yourself patient by surrounding yourself with those who pray to God, seeking His approval.  And do not turn away from them with desire for the attractions of this worldly life.  These words were addressed to Prophet Muhammad, may the mercy and blessings of God be upon him, but hold a lesson for us all.  It is a lesson that transcends time and holds the believer in good stead.  One is influenced by those around him.  Thus surrounding yourself with those who seek God’s countenance makes perfect sense.  You and your companions should have the same goals and for a believer the ultimate goal is the success in the Hereafter.

Do not be distracted by worldly desires.  Riches and fame particularly in the 21st century are two things that people strive mercilessly to attain, yet they are nothing but a distraction.  We know that the purpose of life is to worship God and to do so in every aspect of our lives.  Relentlessly pursuing worldly things or questionable notoriety may satisfy a human desire but it pulls us away from the remembrance of God.  Keeping company with those who make that remembrance a priority is a wise and beneficial life plan.  Prophet Muhammad said, "The believer to the believer is like a solid building, one part supporting the other".[1]

God says to humankind, the truth is obvious, I (God) have laid it bare and explained it to you.  Those who wish to believe may do so, and those who wish to ignore it may also do so.  Each person has been given a free will to choose from but at the same time one is responsible for the choices he makes.  God gives us a stern warning by mentioning the Fire that has been prepared for the wrongdoers.  It is a ghastly place where those who call for relief will be given water like boiling oil.  It is a terrible drink and it is a very painful place to be for all of eternity.

When God describes Hell and life within its confines it is hoped that humankind will view it as a warning.  This is what awaits you if you refuse to obey the commandments of God.  God is saying pay attention, protect yourselves and ask for forgiveness.  A terrible drink in a painful place is a promise from God for those who fail to accept His offers of forgiveness.  Repent, vow to stay away from sinful behaviour and try to improve your status with God.

In contrast however, those who believe and do good deeds will find a very different Hereafter awaiting them.  One that is more blissful than a human being is able to imagine.  God states specifically and unequivocally that He will never let a good deed go to waste.  Among God’s names we can find ‘The Most Appreciative’, He appreciates every little attempt we make to be a good person.  The smallest of deeds are not forgotten.  God even appreciates when we decide against doing a bad deed.  This is what Prophet Muhammad had to say about God’s appreciation of our righteous behaviour and actions:

A man was walking along the road and found a thorny branch blocking the way so he removed it.  God appreciated that and forgave him.[3]

These essential verses remind us to surround ourselves with good people; people who remember their Lord in the morning and in the evening.  Our companions should encourage and inspire us to pray and to be charitable.  They should inspire us to do more and to do better, and we, in our turn should encourage others likewise.  Remember that God knows and appreciates our righteous behaviour and any attempt we make to please Him.  Even the tiniest attempt to do better will not be forgotten.   Remember too that we have been warned; ignoring the commands of God will bring about an unbearable consequence.  We choose the life we have in the Hereafter.

Great work. Thanks for sharing with us. May Allah give us taufeeq to worship Him. And guide us to the right path. Ameen.