Description: God prepares Prophet Muhammad for heavy responsibilities.  Hell is promised to the disbelievers that refuse to take heed of Prophet Muhammad’s warning.  The night prayer is made easy. 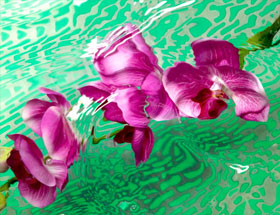 This chapter of the Quran was revealed in Mecca with the exception, many scholars believe, of the lengthy final verse.   The subject matter of the first 19 verses indicates that it was revealed in the earliest part of the Prophet Muhammad’s mission while he was being prepared to shoulder the responsibilities of living and teaching others to live in the Islamic way.  Verse twenty is believed to have been revealed in Medina when the rules and regulations of a functioning society were being established.

This surah begins by addressing Prophet Muhammad, may the mercy and blessings of God be upon him, as Muzzamil, the one enfolded or wrapped in garments.  He (Prophet Muhammad) was asleep wrapped securely in his garments but God awakens him and tells him to pray, at this time of the night, to prepare himself for the time which is about to come.  It is a time heavy in responsibility and the revelations weigh heavily upon him both metaphorically and physically.  Arise at night and stand in prayer.  Not the entire night, rather half the night, or a little more, or perhaps a little less.

The hours of the night, says God, are more effective because words spoken (Quran recitation, prayer and supplication) at this time make a deeper impression and are understood with sharper clarity.  Only those who are both sincere and devoted are able to arise at this time and absorb the words of God.  This is most certainly because during the day humankind are occupied with the worldly affairs of life.  In the quiet of the night remember your Lord and remember also that you are devoted to Him alone.

Trust God and rely on Him.   He is the Lord of the east and the west.  There is no God but He.   Next God addresses Prophet Muhammad in particular and humankind in general when He says bear patiently what they say and politely leave their (the detractors) company.  God will deal with those who reject the message yet enjoy the comforts God provides.  So God says, let them be, for a while.  A punishment awaits them; one of shackles and fire, and choking food as well as a painful torment.  On the Day of Judgement the earth will shake and the mountains will crumble to sand.

Those who oppose the Prophet and the message he brings have been warned.  Prophet Muhammad will be a witness both for and against them.  He is a warner and a Messenger the same as Moses who was sent as a warner and Messenger to Pharaoh.   Pharaoh disobeyed and God seized him in a firm grip.  A heavy punishment was inflicted upon him and the people who obeyed him above God.  Thus if you disbelieve, how will you guard against a Day that will turn the hair of children grey? How will you guard against a Day on which the sky will be ripped apart and God’s promise will be fulfilled? How will you save yourself from the punishment for disbelief on the Day of Resurrection? This is a reminder, so let those who wish to succeed, move in the right way towards their Lord God.

This is the verse that many scholars believe was revealed in Medina approximately ten years after the previous verses.  According to the traditions of Prophet Muhammad it was revealed so that the new Muslims would, if necessary, curtail the length of their night time prayers in order to prayer the  obligatory five daily prayers in a timely efficient manner.

God addresses Prophet Muhammad saying that He knows that he (Muhammad) stands in prayer for long hours of the night; sometimes two thirds of the night, at other times half the night or a third of the night.  God also knows that so do too many among the companions.  God controls the alternation of day and night therefore knows that you (humankind) will not be able to keep such a gruelling schedule.

So read from the Quran as much as you can.  God also knows that there are some of you that are sick, and others travelling through the land seeking the bounty of God and still others are fighting in God’s cause.  Therefore recite as much as is easy for you, be steadfast in prayer, and pay the alms that are obligatory upon you, and give to God a good loan.  Whatever good you store up for yourselves it will not go to waste; God will improve it and increase it for you.  Ask God for forgiveness, He is oft forgiving, Most Merciful.