Death in the Context of Faith

Description: Death is not the end of everything; it is a mere station of a long journey.  We can look at it positively and influence our lives with it to achieve more in this world and receive a good outcome in the Hereafter. 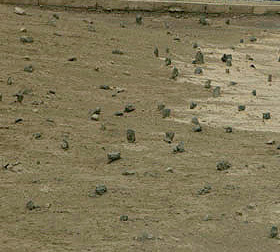 In the old days, when a woman saw in a dream a man extinguish the lantern in the house, or when she saw that a great house has collapsed on its foundations, she would be told by a dream interpreter that the man of the house was going to die!

One person said: "I saw in a dream that I was walking with crutches in the morning, and an hour later I was informed that my father had passed away."

The Arabs of old thought the crow was an evil omen.  This was all superstition stemming from the days of ignorance before Islam.

A little girl was asked: How many children are in your family?"

She replied: "We are seven."

He asked: "Where are they?"

She said: "Five of us are here, and two of us are beneath the tree over there."

He looked in the direction she was pointing and saw two small gravestones under the tree.

Death is neither obliteration nor is it the end.  It is a transition from one state of being to another.  It is being born anew into another world.  Though it looks like the plug has been pulled on an electrical appliance, it is a fleeting, transitory state.  We say to children that the deceased "has gone to their Lord".  It is a good way to describe it.  It is a positive way of looking at it and it accords well with our faith.

The Meaning of Life

Albert Camus, the French existential philosopher, said that since we all must die, nothing has any meaning.

Much earlier, al-Khayyam said: "This glass was made in this exquisite form, so why must it succumb to destruction?"

These are destructive, nihilistic thoughts.  In contrast, Prophet Muhammad said: "be in this world as a stranger or a wayfarer."

Ibn Umar used to say: "When you go to sleep at night, do not await the dawn, and when you wake up, do not wait for night to come.  Take advantage your health for your times of sickness and take advantage of your life before your death."[2]

Life is like an airport; it is merely a preparation for the long journey to come.

God says: "He it is who created death and life to test you as to which of you are best in deeds." (Quran 67:2)

This is a positive way of looking at it.  Instead of being seen as a cessation of activity, this inevitable event is seen as a catalyst for activity.  We need to get things done and make our mark while we still can.

When we appreciate that life is short, it will help us to be more forgiving people.  We will be willing to set personal grudges aside, knowing that our time with others is limited.

We are forced to ask ourselves three crucial questions:

2.    What will people say after we are gone?  What inspiration will they find in our life stories?

3.    What will our good deeds be like when we move on to the Hereafter?

One of the Pious Predecessors said: "There are people who are doing so many good deeds, that if they knew they were going to die tomorrow, they would not be able to increase what they are doing."

Steve Jobs gave a commencement address where he described how he used to have to sleep on the floor in friend’s rooms, how he had to walk for miles to get a free meal, how his young mother had to struggle to find people to adopt him when he was born, how he was so easily pushed out of the company he established, and how he felt when he was diagnosed with pancreatic cancer.  He then said: "if you live each day as if it was your last, someday you’ll most certainly be right."

How to Look at Death Positively

1.    It is enough to think of it as a journey to a place without oppression or injustice.  On the Day of Judgment, it will be said: "Today, each soul will be recompensed according to what it has earned.  There is no injustice today." (Quran 40:17)

2.    It is a reunion with our loved ones who have passed away.  Right before he died, Muadh ibn Jabal said: "Tomorrow, I will meet with those I love, Muhammad and his Companions."

3.    It is liberation from the prison of material existence.  The Prophet said: "The world is the believer’s prison."[3]

4.    It is a mercy for those whose lives are strained by debilitating illness, deprivation or incapacity or when a person’s mind deteriorates so much that they can no longer interact with their loved ones.

5.    Death is akin to sleep.  Both are a change in our state of existence.  One is a permanent move to another life, and the other foreshadows it.

6.    Knowing that we are going to die one day helps us to hold on to our values when facing the tribulations of life, and makes it easy for us to make the right decisions when we are confronted with unethical but appealing choices.