Description: A brief commentary of Chapter 67 of the Holy Quran.  These verses remind us of our purpose in life and of God’s omnipotence over all creation. 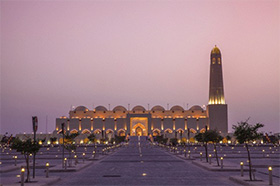 The chapter begins with the mention of God’s kingdom (‘mulk’ in Arabic) thereby giving it the name.  Revealed in Mecca in the initial stages of opposition after Prophet Muhammad’s mission had just begun, the surah (chapter) challenges the disbelievers with declarations of God’s total power over them, and everything else, in this world and the next.  It describes the regret the disbelievers will express on the Day of Resurrection (verses 9–10, 27).  It alarms those who are ignorant of God and the life to come.

Prophet Muhammad, may the mercy and blessings of God be upon him, used to recite it every night before going to sleep.[1]  There are several reports attributed to Prophet Muhammad that speak of the fine qualities of this chapter.  The most reliable one is as follows:

"There is a surah of the Quran, no more than thirty verses long, that will argue in favor of anyone (who knew it) until it will usher him into Paradise.  It is Surah Tabarak (Mulk)"[2]

Verses 1-5 Some manifestations of the power of God

‘Who has power over all things,’ liberates us from fearing others.  When this is recited every night we remind ourselves that ultimate goodness is only with God and this will nurture our love for Him.  When we remind ourselves that He is in control of our world then we will fear only Him.  We will not be bothered about people’s expectations but our worry will be, ‘How does God want me to live?’.

God gave us this cycle of life and death, so that He may test us to see who amongst us is best in deeds.   If our life is a test and the results depend on beautiful deeds, then we must constantly remind ourselves that any action becomes beautiful in God’s sight when done purely for His sake and according to the way of our Prophet.  Only in obedience can we find peace and tranquility.  Simply look at the skies and see how they are in complete submission to their Creator.  The signs of God are everywhere but we are too involved in our own affairs.  Most people do not seriously think about the Hereafter.

Verses 6-11 End of disbelievers and their confession of sins

God says that when the disbelievers will be thrown into the Fire, the guardians of Hell will ask them if they were not warned.  They will confess their biggest error was that instead of taking advice they used to mock those who warned them as the misguided ones.  The fact is that when you don’t want to face the reality then even your senses stop working.  The ears don’t hear and the hearts don’t ponder.  In this world we never want to admit our faults, but in the Hereafter everyone will recognize their sins.  Unfortunately, it will be of no use then.  They shall confess their sins and the dwellers of Hell will be far away from divine mercy.

Faith is valuable only when you believe even when you cannot see.  God is warning us here that if you just make claims of faith and your heart does not believe then remember that He knows everything.  We make claims that we have surrendered our lives to God.  Do we even realize what it means to surrender? As an example, look at the earth and its submission.  We will be buried in this earth and from it we will be raised again, but most of us forget death and resurrection and then go about the earth living in a fool’s paradise.

Verses 16-22 Challenging and rebuking the polytheists

God desires for us to come out of our arrogance and realize that the same earth that God has made subservient for us can be the means of our punishment.  If today we think that it is so unlikely to happen then we can look into the history of the previous nations and see how they were rooted out of this world due to their misdeeds.

If we don’t have time to go into the details of the past then simply look at the birds in the sky.  Have you ever noticed how they fly so effortlessly in the air? Who is holding them against the gravity of the earth? Just as the compassionate God holds the birds in the air, similarly the same God holds us tightly to this earth.  Otherwise if He wills He can stop giving the earth its gravity and we would all be scattered into the atmosphere.  Do we think anyone other than God can save us? If he stops giving us food, who will nourish us?

Why do these simple truths come to us like new discoveries? Because we have taken everything for granted and have stopped thinking beyond the obvious.  So generation after generation people blindly follow the trends of their families and friends and still think that they are on the right track.  God gave us all the senses, all the faculties with which we should have recognized Him and He gave us such sensitive hearts but what have we done?

God gave us an appointed  term in this world and free choice to do as we please. In other words, we choose to believe or disbelieve; whatever we choose, we shall all be gathered before Him on the Day of Resurrection.

God alone has settled billions on earth to try them in their worldly life.  On the Final Day of Judgement, He will assemble all of them before Him to take account of their deeds.  The knowledge of when that Day will be rests with God alone.  The Prophet is only a warner.

The whole chapter is about changing our thoughts.  We tend to live on autopilot.  We do our work, even acts of worship, and we hardly think of God.  We forget that each breath comes with His permission.  Each drop of water that we drink is from His mercy.  The question is, are we grateful?

Let Surah Al-Mulk be a regular part of your life so that it should strike you daily in such a way that you start looking at life with the eyes of the heart.  Love God more than any other thing and fear Him more than all other things.  The feeling will lead to the most beautiful deeds that will make us beautiful in the eyes of God.

[2] Abu Daud, Tirmidhi, Ibn Majah and Nasai.  Declared authentic by Haythami, and Dhahabi in his notes on Mustadrak.

I thank you for sharing islam