Description: A continuation of the list of traits belonging to a believer.  God describes these characteristics in order that we may know them and develop them. 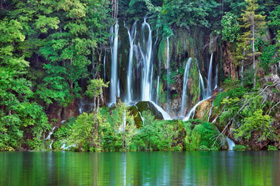 When the news of salvation via repentance was revealed it was considered a great blessing by the new Muslims.  Very few had been free from sin and vice during their time before the revelation of Islam and this general amnesty filled them with hope.  God is merciful and compassionate and does not rebuke a person for past errors.  Many instances of people who reformed their lives by repenting to God are reported in the authentic traditions of Prophet Muhammad, may the mercy and blessings of God be upon him.

An old man came to Prophet Muhammad and said, "All my life has passed in sin, there is no sin which I have not committed; so much so that if my sins were to be distributed over the people of the whole world, they would all be doomed.  Is there any way out?" The Prophet asked him, "Have you embraced Islam?" He said, "I bear witness that there is no true deity except God, and that Muhammad is the Messenger of God".  The Prophet then said, "Go back, God is All-Forgiving and has the power to change your evil deeds into good deeds."[1]  The one who embraces Islam has the slate wiped clean and believers who repent have the chance to begin afresh.

Good deeds can obliterate bad deeds and repentance gives the sinner another chance.  To emphasize this God said, "except for those who repent, believe and do righteous deeds.  For them God will change their sins into good deeds." (Quran 25:70) and Prophet Muhammad reinforced the meaning behind those words when he said, "God extends His hand at night to forgive those who sinned during that day, and He extends His hand during the day to forgive those who sinned during the night.  This will continue to be the case until the Sun rises from the west." Seeking repentance therefore, is another characteristic of the true believer.   God is All-forgiving and thus the one who sincerely repents will find that he is forgiven.

Believers do not testify to falsehood.  They do not lie, they do not give false evidence and they do not conceal the truth.  Islam calls all these things sinful.  Prophet Muhammad likened false testimony to ascribing partners with God[2]  and the Quran further tells us to, "…shun the abomination of idols and shun all false statements." (Quran 22:30) In addition to this, in the Book of Zechariah, included in both the Torah and the Christian Bible, we find the words, "These are the things you are to do, speak the truth to each other, and render true and sound judgment in your courts…"[3]

The same people who do not give false testimony avoid ill speech and stay away from frivolity.  If they happen to come across sinful, useless vain behaviour they pass by with dignity.   They do not stay to engage in the behaviour, or argue about it; they walk away.  God expects believers to distract themselves from the evils associated with vain frivolous behaviour and one way to do this is to remember the greatness of God and to contemplate Hhis signs in the world around us.  When believers are reminded of God that reminder does not fall upon deaf ears, they are grateful and turn towards God eagerly.  They do not deliberately close their eyes to the signs of God instead they are deeply moved by them.

Believers ask God to grant them righteous offspring who will worship God alone and not associate any partners with Him.  They supplicate for wives and children that will be a comfort to them.  They ask God to assure that their families follow a path of righteousness.  In addition to this the believer aspires to reach a level of righteousness that others will wish to emulate.  It is worth remembering that at the time of revelation many of the families of the first Muslims had not yet embraced Islam.  Prayers and supplications concerned with the afterlife of their families were upmost in the minds of the companions of Prophet Muhammad.

Life, in many ways is much the same today.  Often a person embraces Islam and begins to fret about the eternal outcome of their loved ones.  Here we can see that a sign of a true believer is their deep concern that their loved ones too worship God alone.  A believer hopes to be the one who inspires others to follow the right path, especially their families and loved ones.

The believers, the ones that have been described in these articles and the ones who strive to be like those described, will be rewarded.  They will be granted their place in Paradise because of their patience and steadfastness.   Many translations of the Quran, especially the more archaic ones call the reward a "lofty palace", a description that calls to mind grandeur.   Some scholars say that it the highest place in Paradise, the one reserved for the most pious and righteous believers.  Certainly the believers are rewarded magnificently with a safe, happy and eternal dwelling place and are greeted with words of peace.

Paradise is a place of eternal security and satisfaction.  All sense of injury and pain are removed and God tells us in more than one place in the Quran that the dwellers of Paradise, the true believers, will be greeted by angels.  They will say, "…Peace be upon you.  You have done well, so enter here to abide therein." (Quran 39:73) They will also say, "…This is Paradise, which you have inherited because of your good deeds."(Quran 7:43)

[1] From the works of Ibn Kathir