Description: A brief look and discussion of the traits that define a true believer.  In these verses God describes these characteristics and sets them out clearly, allowing us to emulate the behaviour He describes.

"And the servants of the Most Merciful are those who walk upon the earth easily, and when the ignorant address them [harshly], they say [words of] peace.  And those who spend [part of] the night to their Lord prostrating and standing [in prayer].  And those who say, "Our Lord, avert from us the punishment of Hell, for it is a dreadful torment to suffer! Indeed, it is evil as an abode and as a place to dwell." And [they are] those who, when they spend, are neither extravagant nor miserly, but keep a just balance.  And those who do not invoke with God another deity, nor kill such life as God has forbidden, except for just cause, nor commit illegal sexual intercourse.  And whoever does this shall receive the punishment.  Multiplied for him is the punishment on the Day of Resurrection, and he will abide therein humiliated – except for those who repent, believe and do righteous deeds.  For them God will change their sins into good deeds.  And God is Oft-Forgiving, Most Merciful.  And he who repents and does righteousness does indeed turn to God with [accepted] repentance.  And [they are] those who do not testify to falsehood, and when they pass near ill speech, they pass by with dignity.  And those who, when reminded of the verses of their Lord, do not fall upon them deaf and blind.  And those who say, "Our Lord, grant us from among our wives and offspring comfort to our eyes and make us a leader (an example) for the righteous." Those will be rewarded with the highest place (in Paradise) because of what they patiently endured, and they will be received therein with greetings and [words of] peace.  Abiding eternally therein; excellent it is as an abode, and as a place to dwell." (Quran 25:63-76) 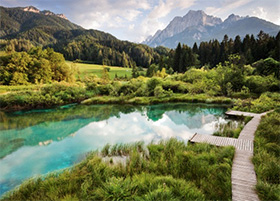 These thirteen essential verses from the Quran can be found towards the end of Chapter 25.  This chapter is called, in Arabic, Al-Furqan and has most commonly been translated as the Criterion.  It is named for the first verse which reads, "Blessed is the One who has revealed Al-Furqan (the criterion to distinguish right from wrong)..."  In more modern translations it has become The Standard, or the Differentiator, all however with the same basic meaning of how to differentiate between what is right and what is wrong.  The Quran is this standard or criterion, and it is in the pages of the Quran that God reveals the right way to achieve a good ending and compares it to the wrong way that leads only to the abode in Hell.  In the verses under discussion God reveals the qualities of a true believer.

This chapter was revealed in Mecca and in its entirety denounces polytheism and deals with and answers all the doubts and objections held by the disbelievers.  Their queries about the Quran, the prophethood of Muhammad, may the mercy and blessings of God be upon him, and the Day of Judgment are answered with a stern warning.  The disbelievers are warned to choose carefully because right has been clearly differentiated from wrong.  Finally, God paints a clear picture of the quality of the believer.  These are the verses that we are concerned with in this article.

These are the people who have struggled with their desires and have developed the qualities beloved by God.  He in turn has raised their status and purified their hearts.  A righteous servant of God, a believer, walks this earth with humility.  They walk upon the earth easily.  To use a modern metaphor, their footprints do little or no damage to this world.  Humility is one of the characteristics of a believer.  If a person walks and behaves with humility and dignity it is a striking contrast to one who is proud and haughty.  And when the humble believer is addressed by the ignorant and haughty ones we are told to walk away and say nothing but words of peace.

When our righteous ancestor Luqman, known as the wise was advising his son he counselled him to be humble and steer clear of arrogance and conceit.   He said, "Do not turn your nose up at people, nor walk about the place arrogantly, for God does not love arrogant or boastful people." (Quran 31:18)  In addition to this the believers do not engage in argumentative behaviour, especially with the ignorant[1]  or foolish.  Prophet Muhammad said that the most despicable person in the eyes of God is one who is harshly argumentative.[2]  Thus if a believer comes across a person determined to start an argument he should extricate himself from the situation and walk away.  Arguing with someone who is loud and opinionated is a futile exercise.

The believer spends part of the night prostrating, praying, and remembering God.  This characteristic is referred to in several places throughout the Quran and is even linked once again with lack of pride.  "… (those) who, when they are reminded of them, prostrate themselves in adoration and celebrate the praises of their Lord and are not puffed up with pride.  Who forsake their beds and invoke their Lord with fear and hope…" (Quran 32:15-16) Their worship has not made them proud and they do not presume that they are God’s beloved ones because of their devotion but out of hope and fear they spend part of the night worshipping God.  This humble devotion is one of the characteristics of a true believer.

These people are also the ones who ask God to save them from the punishment of the Hellfire.  They are aware that it is a place of suffering and despair, therefore they work hard to acquire good deeds with which to tip the balance of their scales on the Day of Judgment.   However they do not rely solely on this because they are aware that it is God’s mercy that will ultimately admit them to eternal Paradise.   Thus the believers arm themselves with supplications to God specifically asking for any punishment in the Hellfire to be averted from them.

When it comes to spending money or using their wealth the believer walks a moderate path between the two extremes of being stingy or on the other hand, being excessive.  They do not live wretchedly but neither do they live extravagantly.  Wasting wealth is one of the things Prophet Muhammad told us that God disliked.[3]  He also advised us to keep pride and arrogance out of our daily lives and extravagant spending when he said, "When you eat, drink, give charity and wear clothes, let no extravagance or pride be mixed up with what you do".[4]  Thus the quality of humility is stressed, in our way of dealing with people, in our worship and in the way we spend our money.

God combines three of the most heinous sins and stresses that a believer does not commit any of them.  The true believer worships only God; one God, with no partners.  He does not kill, except for a just cause and he does not have unlawful sexual intercourse.  If he does the penalty will be severe.  However there is a way back, a way to be forgiven and that is to repent sincerely to God.  Repentance of course may not save people from earthly punishments for the crimes they have committed but it will save a believer from the eternal fires of Hell.

Prophet Muhammad (PBUH) has shown people a highly moral code of conduct and manners. Even being a non muslim I feel these verses of the Holy Quran should be included in our lives.