Description: Unitarianism branched out of Christianity. Its early history and influence of Islam is traced along with comparison with Baha’i faith and Christianity. 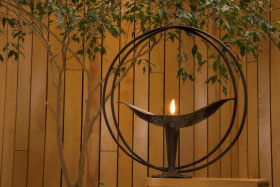 Much like other branches of Christianity, Unitarianism is no exception to a wide diversity of beliefs, worship, and a complex history. In the US, Unitarianism has historically been closely related to Universalism and known as Unitarian Universalism or UU for short. Universalism, founded by an Englishman named John Murray, is a belief that God’s love will ultimately redeem all people from sin. In simple words, everyone will be saved. Some consider UU to be part of liberal Christianity, others don’t. UU is currently present in twenty-nine countries.

Unitarians go back to 325 CE and the Council of Nicaea in which the church voted that God and Jesus had a father-son relationship. Early Unitarians claimed to have the original, pre-Nicaea faith that was condemned as heresy. Arius (256-336 CE), a priest from Alexandria, claimed that Jesus was not God. His ideas were rejected at the Council of Nicaea in 325 CE. Also, ‘universalism’ was condemned as heresy two centuries later in 553 CE at Constantinople at the Fifth Ecumenical Council.

Historically, Unitarianism had a global presence and Universalists existed only in N. America. Unitarianism has a long history dating back to the Italian humanist movement of the 15th century which created Unitarian churches in Poland, Britain, and British colonies.

Influence of Islam and Toleration of Muslims

Michael Servetus (1511-1553 CE) from Spain revived the idea that the trinity was not based on the Bible. He was influenced by the Muslims who lived in the Iberian peninsula at the time. He actually used the Quran, the Muslim scared text, to attack trinity in his book ‘The Restoration of Christianity’[1]  and denied the concept of original sin. He was eventually burned at the stake in 1553 CE. He is considered one of the fathers of liberal Christianity. Unitarians/anti-Trinitarians spread along the borders of Christendom with the Muslim Ottoman Empire as their people were forced to deal with other viewpoints and this made Christians in these areas more tolerant,[2]  and ‘because of the cross-cultural interactions with Islam, a type of Christianity could emerge whose prophet was not divine, but more like Mohammed.’[3]

Muslims displayed tolerance towards Unitarians. Suleiman I of the Muslim Ottoman Empire, supported the monarchy of John Sigismund, the only Unitarian king in history. Suleiman sent an emissary to witness Queen Isabella nursing the young prince after he learned of his birth in 1540. Then the following year, the sultan sent troops to rescue Isabella’s army in Buda as it was about to be defeated by Ferdinand of the Habsburg Empire. Historian Susan Ritchie argues that there is a direct influence of Islamic tolerance on the Edict of Torda, which was the "first modern articulation of the principle of religious toleration by Europeans at the level of state rule."[4]

In some ways, UU is to Christianity what Baha’i faith is to Islam. They both originated from a parent religion from which they borrow some elements and heavily borrow from other religions and philosophies. Neither has a scripture or creed[5]  to refer to. Both are a combination of humanism, religion, and other philosophies with a fairly small following.

Is UU Christian? The answer depends on the location and the individual. Around Romania, it is. In Britain and Ireland, it is generally Christian. In US and Canada, it is not. In US, the faith does not require belief in Christianity as means to salvation and promotes that other religions are valid. There are members who believe in God and there are members who don’t.

Unitarianism is considered an ethical religion, not a religion based on a creed. UU is based on Christian ethics, but it is not traditionally Christian at the same time. Mainstream Christianity believes that the death of Jesus revealed God to humanity and the resurrection of Jesus is the cornerstone of their creed, whereas UU does not require a belief in the supernatural. Unitarians deny the trinity as unreasonable and non-biblical. Unitarians do not adhere to the Christian standard of accepting Jesus Christ as Lord and Savior. They are against infant baptism. That is why it is possible to be Buddhist Unitarian or a Hindu Unitarian.

UU lacks a visible structure. There are no specific prayers or rituals. Many do not use the Bible at all, some have infrequent Bible based services. Buddhist meditation and yoga is actively encouraged. Faith is shown through social work.

British Unitarian practice differs from American. In the US, there are some congregations that use prayers books and others that would not even say the word ‘prayer.’

[3] ‘Introduction to the Unitarian and Universalist Traditions’ by Andrea Greenwood & Mark Harris, p. 21

[4] Susan Ritchie, "The Pasha of Buda and the Edict of Torda: Transylvanian Unitarian/Islamic Ottoman

Cultural Enmeshment and the Development of Religious Tolerance," Journal of Unitarian Universalist

[5] ‘Introduction to the Unitarian and Universalist Traditions’ by Andrea Greenwood & Mark Harris, p. 3