Description: A brief commentary of Chapter 99 of the Holy Quran.  These verses concisely describe the horrors of the Day of Judgment. 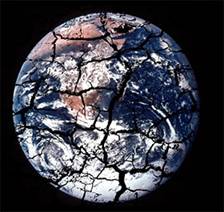 There is some scholarly dispute about whether this chapter was revealed in Mecca or Medina.  In general, chapters revealed in Medina emphasized establishing an Islamic society.  The earlier Meccan chapters presented the fundamentals of Islam in a concise and effective way, this included the final Judgment.  This is one of a series of chapters that deal with scenes from the Day of Judgment.  (Others include chapters 81, 82, and 101.)

Verses 1-3  Terror on the Day of Judgment

This is the beginning of the end; the Final Day.  God is telling us quite clearly how the Day of Judgment will begin.  There will be a violent earthquake the like of which has not been seen before.   The whole earth will shake; one huge convulsion after the other.  It will shake, pause and then shake again, over and over until mountains fall and buildings crumble.   The earth will then be reduced to a flat surface.

The violent shaking and convulsing will cause the earth to expel its burdens.  Islamic scholars have given this verse more than one meaning.  The first is that the bodies of the dead will be thrown out of their graves, resurrected.  Secondly the treasures of this world will be laid out exposing their insignificance.  What use are expensive cars and jewellery, for instance, when the earth and all that is in it has been shaken and flattened.  Thirdly the earth will cast out, as if it were a video recording, a record of all the deeds and actions that have taken place throughout its history.

All of humankind will look around afraid and transfixed.  Each person will be amazed and terrified at the same time and each person will ask himself or nobody in particular, what is happening!? What is wrong with this earth!? Slowly the fear will be replaced by the realization that this is the Day of Judgment and the terror will take on a new dimension.  This is the day that was promised, the Day of Resurrection, the Day of Judgement.

Verses 4 and 5  The earth bears witness

The earth itself will bear witness as to what has happened on it.  Every single thing and every single person’s deeds and actions will be laid bare.  Humankind individually and as a whole will be bewildered.   Nothing has been hidden; the earth has recorded and remembered each and every action and reaction and now at the command of God it will reveal its long kept confidences.  And the forgetful will be reminded of the deeds and actions they have somehow dispelled from their consciousness.

God will cause the earth to speak or in some way reveal the events that have taken place; long kept secrets, true version of events lost in the midst of time, great deeds, and seemingly insignificant ones that were never acknowledged will now be clearly identifiable.  The earth will report its news; describe its condition and what has happened on it.  The earth obeys the orders of God in true and complete submission.

Many scholars believe that this is describing the people separated into categories depending on what their position will be in the Hereafter.  It is a scene indescribable in any human language.  The people are both terrified and amazed as they go to where they will be confronted with their deeds, both the good and the bad.  For many this will be more distressing than any earthly punishment because humankind is very good at hiding their crimes even from themselves.

In the seventh verse the use of the word ‘so’ denotes a conclusion.  So now you will see all the bad deeds and all of the good deeds you have ever done.  Nothing will be left out, even things as small as you could imagine; a speck of dust, or even an atom.  Having a good deed as small as an atom could mean a favorable outcome, likewise a bad deed, as tiny as an atom, may cast you into the abyss.

This chapter started with something big and ends with the smallest of things.  Even a very ordinary small good has its own value and likewise even the most ordinary evil will also be considered and taken into account.  Thus, no good act, however small, should be left undone.   It may be that many such good deeds can collect and add up to be heavy on the Scale.  Likewise, even the most commonplace evil should also not be committed, because tiny sins done repeatedly can harden the heart and make it blind to the seriousness of greater offences.

Assalamu Alaykum Masha'Allah, truly the Qur'an is amazing. These summaries of surahs are beautiful, so easy and clear to understand, Insha'Allah please add many more. Allah SWT bless you all for your noble efforts

Commentary explanation given about chapter 99 is satifactorily true; and I have gotten the real meaning of it. I read it with carefulness so that I understand the core of this chapter.