Description: A brief commentary of Chapter 12 (verses 1-66) of the Holy Quran.  The story of Prophet Joseph is a story of suffering and sadness, focusing on putting one’s trust in God and knowing that He is the best of Planners.  Part one sees Joseph being torn away from his loving father and thrust into slavery, and ends with Joseph securing a high position in the Egyptian government. 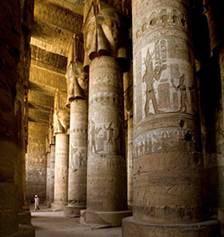 The story of Joseph is framed by a three verse introduction and a 10 verse epilogue.  It is generally agreed that it was revealed in Mecca in a year that is known as the Year of Sorrow.  Prophet Muhammad lost two of his closest supporters, his uncle Abu Talib and his beloved wife Khadijah.  The story of Joseph confirms unconditionally that God has total control over all affairs.  It is a story of patience in the face of adversity and trust in the face of sorrow.

Joseph has a dream in which he sees the sun, moon and eleven stars prostrating before him.  This is interpreted as men bowing down to him.  He confides in his father who advises him to keep it secret from his brothers.

Joseph and Benjamin were the sons of Jacob’s second wife.  The older boys considered themselves men.  They were older, they were stronger and saw in themselves many good qualities.  Blinded by jealousy they plan to kill Joseph.  One of the brothers convinces the other brothers to throw him in a well instead.  They carry out their devious plan and using their father’s worst fear (a wolf attack) and a blood stained shirt, they try to convince him of Joseph’s death.   Meanwhile, God eases Joseph’s fear.   God inspires him that one day he will inform his brothers of their deed while they do not realize who he is.  Joseph’s father Jacob sensed treachery but turned to God and accepted the news with trust and patience.

Verses 19-22 Joseph is established in Egypt

Joseph is rescued from the well and sold into slavery.  He is sold for a small price to an influential man from Egypt, who comments to his wife that Joseph may be of some service to them.  God remarks that He established Joseph in the land and provided him with sustenance in order to teach him the interpretation of dreams.  God has full power and control over all affairs but most people are blind to this.   Joseph grows up in comfortable conditions and God bestows upon him good judgment and knowledge.  He is in the house of a politician learning how to negotiate and make wise decisions.

The wife of the Egyptian politician watches Joseph grow to manhood and is attracted to him.  She tries to seduce him but he seeks refuge in God.  The wife chases Joseph to the front door just as her husband is entering the house.  The wife tries to blame Joseph but a member of the household points out that his shirt was torn from the back.   The women of the city began to gossip about Joseph and the politician’s wife.

After she hears the gossip, she invites the women to her house in order to show them how beautiful and attractive Joseph is.  She hands each of them a knife and calls for Joseph to show himself.  The women are astounded and cut their hands.  She explains that she tried to seduce him but he resisted.  She threatens that if he does not obey now he will go to prison.  Joseph is afraid that he will let himself be seduced so he asks God to protect him, saying he would prefer prison to what the women are planning.

He is imprisoned along with two other men.  The two other prisoners discuss their dreams with Joseph and ask him to interpret them.  One of them said, ‘I dreamed that I was pressing grapes’; the other said, ‘I dreamed that I was carrying bread on my head and that the birds were eating it.’  Joseph mentioned their next meal reminding them that God provides their sustenance then replies that he is able to interpret dreams because God has taught him to do so.  He spells out his belief in God and in the Day of Judgement.  Joseph asserts that his family, the family of Abraham, Isaac and Jacob hold the knowledge of the Oneness of God, and that his religion and family do not attribute partners to God.  Most people however do not realise this.

Joseph interprets the dream.  One will serve wine to his master; the other will be crucified and the birds will peck at his head.  Joseph asks the one to be saved to mention him (Joseph) to his master.  But Satan makes the man forget and Joseph languishes in prison for more time.

The King (of Egypt) asks his counsellors to interpret his dream.  ‘I dreamed about seven fat cows being eaten by seven lean ones; seven green ears of corn and [seven] others withered.’ They were unable to do so and the ex-prisoner remembered Joseph.  He ran to Joseph, Joseph interprets the dream and the King asks for Joseph to be brought into his presence.  The ex-prisoner goes back to Joseph but Joseph asks him to ask his master (the King) about the women who cut their hands.  The King establishes Joseph’s innocence.  Joseph says he wanted his master, the politician to know that he did not betray him or abuse his trust.  Joseph appears before the King who offers him a position of high rank.  Joseph asks to be put in charge of the storehouses.  In this way God settles Joseph in the land.  God points out that He grants mercy to whomever He wishes, and does not fail to reward good.  The reward in the Hereafter, He points out, is the best.

Joseph’s brothers present themselves asking for their measure of grain.  Joseph recognizes them but they do not recognize him.  He asks them to come again, this time with their younger brother.  Without him they will not be permitted to have the grain.  They reply that they will try to persuade their father and get his permission.  Joseph tells his servants to put the goods his brothers traded for grain back in their saddle bags in order to make them eager to return.  The brothers ask Jacob to let them take their younger brother but he is wary asking "Am I to entrust him to you as I did his brother before?" The brothers open the saddle bags and find their good returned to them.  Jacob says he will not send the boy unless the brothers swear they will do everything humanly possible to keep him safe.  They gave their pledge and Jacob said, ‘Our words are entrusted to God.’

[1] Ibn Kathir, Stories of the Prophets.