Does God Reside Within His Creation?

Description: This article briefly discusses and refutes the idea that God is physically and literally present within nature, and proves that His Supremacy above His creation is what conceptually suits Him.

God Almighty is distinct from His creation; nothing of Him resides in it,[1] nor is there any of His creation in Him. 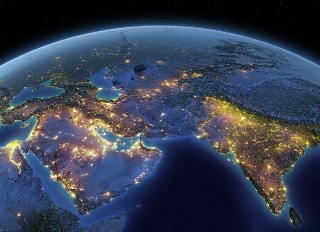 This motif has been reiterated by all Muslims theologians to confirm that there is no place in Islam for belief in God being inherent in His own creation,  a concept known as God’s omnipresence, ubiquity, or pantheism (from pan- "all" + Greek theos "god") [2].  This concept underlies almost all famous world religions and mythologies.  It simply makes the creation, or part of it, a manifestation of God.  Anthropomorphic theologies - those that give human attributes to God - adopt pantheism as their bedrock belief.  Hindu Lord Krishna is quoted to say:

"I exist in all creatures,

So the disciplined man devoted to me

Grasps the oneness of life,

Indigenous pagan religion of Japan known as Shinto (literally ways of the gods) confesses belief in Kami [which] refers to the divinity, or sacred essence, that manifests in multiple forms.  Rocks, trees, rivers, animals, places, and even people can be said to possess the nature of Kami.  Kami and people exist within the same world and share its interrelated complexity.[4]

Why is Islam so unwaveringly pitted against this unanimously welcomed notion? Muslim scholars quote more than a thousand proofs from the Quran alone that God is in the highest status of supremacy above the heavens (above all creation):

"They fear their Lord above them, and they do what they are commanded." (Quran 16:50)

This however does not preclude the fact that God has complete knowledge of His creation (without being part of it).  He is the Creator and the Sustainer of everything and nothing comes into existence except by His will. He has complete power and authority over all that exists.

This does not mean much to those who do not believe the Quran to be the word of God.  However, there are gross conceptual inaccuracies resulting from holding a belief that God is physically and literally permeating his creation.  The offshoots of this concept are against logic, religion and morality.

1-   Pantheism is a form of atheism enlivened with emotions of reverence of the creation, or as Richard Dawkins puts, it’s a sexed-up atheism[5].  It’s a rejection of God as an independent being, intertwined with channeling religious emotions to the physical world.  Atheism simply aims at a God-less interpretation of life, whereas pantheism appeals to scientists who can’t do without a flavour of spirituality when they see symmetry and order in creation.  In one of his letters, Albert Einstein, a professed pantheist, writes "We followers of Spinoza see our God in the wonderful order and lawfulness of all that exists and in its soul ["Beseeltheit"] as it reveals itself in man and animal."[6]  God becomes testable and researchable and scientists can be their own clergy!!

2-   The questions of "Did God and the Universe start to exist together in this case?" and "Is God the Creator of the Universe?" become redundant in this context; the answer is God could not have existed before a thing He cannot be envisaged without, and because He cannot have created a thing without being distinct from it, He cannot be a Creator of a creation He is enmeshed in.  In short, this theological approach has fully decapacitated God and made him unable to subsist autonomously for a second.  In his Bezels of Wisdom, Ibn Arabi, the pantheist Sufi, explains the mystery of how God (who is Infinite) is inseparably captured within the finite creation in a striking yet hardly comprehensible metaphor: The universe is the  food of God and God is the food of the universe; as deity swallows up the cosmos, so the cosmos swallows up deity.  God and the world have therefore to have started being together.

3-   Needless to say, all classical acts of worship become superfluous: If God permeates me and I permeate Him, how and why should I pray to anything when I have God inside me as well, in other words - God is being prayed to by God?!!  Actually, abstaining from all forms of worship would be more understandable than doing any in view of this leveling immanentism; the spiritual hierarchy of all creation, which is supposed to have God on top of it, collapses into a demotivating spiritual lethargy.   Instead, one hears nebulous terms like revering and celebrating nature, which are only a priori attendants of any belief in God as a distinct Creator who created nature without being identical with it.

4-   Why certain objects or animals are worshipped can now be easily understood, especially if aiding myths speak of the divine sparks in them.  Intensely based on animal-worship and idolization of nature, Hinduism sees animals and elements of nature as manifestations of the Divine Power.  This elevation of nature however can’t be without a simultaneous denigration of Divinity that has always been synonymous with sacredness and majesty.  God has become so indiscriminately mundane that He can be inherent in putrefaction and in as many filths and inappropriate places as one can enumerate.  The pantheist Sufi Ibn Arabi, as do all expounders of this theory, leaves out carrions of dead animals, stagnant, odorous and putrid marshes, and all slovenly places God is implied to be inherent in, and poetically selects where he believes God to be:

My heart can take on

a meadow for gazelles,

a cloister for monks,

For the idols, sacred ground,

Ka’ba for the circling pilgrim,

the tables of the Torah,

the scrolls of the Quran.[7]

Sufis are also understandably  known for their pursuit of Fanaa’ (Literally self-annihilation) which aims at spiritually losing oneself into God, again a conceptual deviation utterly shrouded in mystery.  As in all parallel paradigms, the revered incomprehensibility orders believers to just have faith and never to give up being mystified when thinking of God, rather than try to understand.

6-   Having intently departed from the concept of a transcendent awe-inspiring God, pantheism can hardly furnish any bedding for conceivable and applicable ethics.  A transcendent Deity is essential for the long cherished norms of sin and evil, and morality has to find motivators other than reward and punishment, a thing that no human set of laws has ever proved able to do without.

Similarly, the bipolarity of good and evil cannot be hosted in such a context; God who is believed to be all good and perfect cannot emanate evil.  Hence all manifestations of evil that we see should consequently be classified as good. Such a theory is unjustifiably inhospitable to the basic values that characterize human life and clashes with simple logic.  Where ethical deterrents and stimuli are both missing, anarchy prevails and the urge for evil cannot be held in check.  "If God includes everything and God is perfect or good, then everything which exists ought to be perfect or good; a conclusion which seems wholly counter to our common experience that much in the world is very far from being so."[8]

[8] The Stanford Encyclopedia of Philosophy