Description: In this article the author draws our attention to some of the ways we can realize the generosity of God. 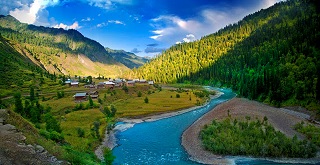 "O human being! What has beguiled you from your generous Lord, who created you, then fashioned, then proportioned you? In whatever form He pleased He constituted you." (Quran 82:6-8)

The question in this verse is rhetorical.  Its sense is: "Should you not thank God and extol His praises for these blessings?"

Prophet Solomon (peace be upon him) said about God’s great favor upon him: "This is of the grace of my Lord that He may try me whether I am grateful or ungrateful; and whoever is grateful, he is grateful only for his own soul, and whoever is ungrateful, then surely my Lord is Self-Sufficient, Generous." (Quran 27:40)

God’s name al-Karīm Karim has numerous connotations, among which are the following:

1.  One Who is Giving and Munificent Bountiful

In the same way, a human being is described as generous if he or she gives to others freely and with a cheerful heart.  Prophet Muhammad, may the mercy and blessings of God be upon him, was an exemplar of human generosity, as were all of the prophets.

Prophet Muhammad was once asked: "Who was the most generous of all people?"

God is generous, giving without measure to His servants.  He gave us life, though beforehand we did not exist.  He gave us our faculties of hearing and sight, our hearts and limbs, our strengths and abilities.  Truly: "If you were to count God’s favors, you would not be able to number them." (Quran 16:34)

He gives all this to us without our asking for it or giving thanks.  Indeed, we usually do not even realize that we have been given anything.  God’s generosity encompasses those who believe in Him as well as those who deny His existence.  It embraces the saint and the sinner, the learned and the ignorant.

2.  One Who Gives and Praises

God alone is perfect.  He is also absolute in His independence, whereas all of creation depends upon Him.  Every atom of the human body is in need of God for its existence.  In spite of all of that, God not only gives to His servants, but He praises them and speaks well of them.

For instance, God says about Job (peace be upon him): "We found him patient; a most excellent servant! Surely he was frequent in returning (to God)." (Quran 38:44)

After trying Prophet Job (peace be upon him) by taking away some of what He had formerly given him, He praises Prophet Job for his patience and constancy, though whatever God gives and withholds is only God’s to begin with.  Nevertheless, when Prophet Job’s ordeal was over, God restored to him what he had formerly enjoyed of His blessings, and He praised him.

When one of the Pious Predecessors read this verse, he was moved to say: "Blessed be God who gives and praises those He gives to."

Likewise, we read in the Quran where God praises His prophets and other righteous people, referring to them as believers, God-fearing, patient, pious, penitent, and pure.  It is a manifestation of true generosity to not only give to those in need, but to commend them and speak highly of them.

God said to Prophet Solomon (peace be upon him) after granting him the kingdom unlike any other: "Such are Our bounties: whether you bestow them (on others) or withhold them, no account will be asked." (Quran 38:39)

3.  One Who Gives Before Being Asked

It is true generosity to give without being asked.  Indeed, we consider a person generous who gives freely to those who ask.  Doing so beforehand is all the more generous.

Most of the blessings that God bestows upon His servants are given without ever being asked for, or without us even being aware of how much we are given.  Indeed, God is the Most-Generous and MunificentBountiful.

4.  One Who Fulfils All Promises but Waives what is Due from Others

God has promised the believers good in this world and a vast reward in the Hereafter.  God never breaks His promise.  At the same time, God has warned those who sin of a great of His punishment.   for those who deserve it by incurring sin and vice.  However, He has made this a matter of His discretion.  He will punish those sinners He deems to punish and pardon those He deems to forgive.

A generous human being is someone who always fulfills a promise for something good, but does not carry through with threats.  God’s generosity is incomparably greater than any human generosity we can conceive of, and He is Forgiving and Merciful.

5.  One Who Never Turns Down a Supplicant

Prophet Muhammad said: "Your Lord God is the Possessor of Modesty and He is Generous.  When His servant reaches out to Him with outstretched hands, He feels ashamed to leave that servant with nothing."[2]

God rewards His servants for their very act of beseeching Him.  This is because our asking of God is a form of worship.  Indeed, Prophet Muhammad said: "Supplication is worship."[3]

God, therefore, always answers those who beseech Him with sincerity.

6.  One Who Rewards a Mere Good Intention, but Never Punishes a Bad Intention Unless Followed by a Bad Deed

If he intends to do it and follows through with it, God will record it to his credit as anything from ten to seven-hundred times the value of that deed.

If He intends to do an evil deed but does not go through with it, God will record it as one full good deed recorded to his credit.

If he intends to do it and follows through with it, God will only record a single evil deed against his account."[4]

Finally, it is from God’s generosity that He honors people in this world and the Hereafter, and made our piety a cause for honor.  God says: "Indeed, the most honored of you with God are the most God-fearing," (Quran 49:13)

It is God who blesses us with our God-consciousness and piety.  This is also from His immense generosity.