Description: Here we look at a number of verses from the Bible that describe prayer and note their similarities to the way Muslims pray. 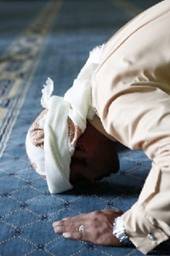 Prayer holds a very important place in the religion of Islam.  It is the second pillar of Islam and the act of ritual prayer is performed five times every day.  There is great power entrenched in the postures of prayer not the least of which is that it establishes and reinforces our connection to God.  This is a connection that God Himself established when he created human beings.  Our ancestor Adam was responsible for teaching his family how to worship God in the correct way which included praying.

All the prophets and messengers God sent to the nations on earth spread the same message, "O my people, worship God, you have no other God but Him" (Quran 11:50).  They all spoke words of wisdom, guiding the people and reminding them that God is One, without partners, sons or daughters.  Most of the prophets mentioned in the Quran are recognisable to people of the Christian and Jewish faiths and they all prayed in much the same way that Muslims pray today.

Muslims believe that Prophet Muhammad, may the mercy and blessings of God be upon him, is the final Prophet and that his mission and message was slightly different to the message of all the prophets before him.  While each prophet was sent specifically to guide his own nation, Prophet Muhammad was sent to guide all of humankind.   He said, "Every prophet was sent to his nation exclusively, but I was sent to all mankind".[1]  Once we understand the connection between all the prophets of God it is not surprising to learn that they all prayed in basically the same way.  What is surprising however is that even though there are descriptions of prayer in the Bible, Christians and Jews no longer pray the way their own prophets prayed.

The remainder of this article will examine passages from various books of the Bible and compare them to the way Muslims pray.

The most recognisable posture in the Muslim prayer is touching the forehead to the ground.  It is the apex of a person’s prayer and it is mentioned in the authentic traditions of Prophet Muhammad as the position in which a believer is as close to God as it is possible to be.   "The nearest one comes to his Lord is when he is kowtowing."[2]  Consider the following verses from the Bible.[3]

"And Moses and Aaron went from the presence of the assembly unto the door of the tabernacle of the congregation, and they fell upon their faces…" (Numbers 20:6)

"…and they fell on their faces before the throne and worshiped God." (Revelation 7:11)

"…then they bowed their heads and worshiped the Lord with their faces to the ground." (Nehemiah 8:6)

"…Then David and the elders of Israel, who were clothed in sackcloth, fell upon their faces." (1 Chronicles 21:16)

In many others places in the Bible where we find the method of prayer mentioned, it calls to mind the way Muslims pray.  In the Bible book entitled Daniel we are able to read a description of Daniel praying to God in a time of great crisis.

"Now when Daniel knew that the writing was signed, he went into his house; and his windows being open in his chamber toward Jerusalem, he kneeled upon his knees three times a day, and prayed, and gave thanks before his God, as he did a foretime." (Daniel 6:10)

It is interesting to note that Prophet Daniel prayed towards Jerusalem.  In the early days of Prophet Mohammad’s mission the faithful also prayed towards Jerusalem.   However the Muslim direction of prayer changed.  About sixteen months after Prophet Muhammad and his followers migrated from Mecca to the city of Medina the direction was changed to facing the sacred House of God in Mecca.

Descriptions of the positions Muslims adopt in the five ritual prayers per day can be found throughout the Bible.   Many are mentioned in the book of Psalms.

And in the book of Kings we find Prophet Elijah casting himself upon the earth in the position of kneeling before touching the forehead to the ground.

This is a position very familiar to Muslims.  So too is the position Jesus adopts during prayer in a moment of fear and uncertainty.

Even though the Jews and Christians today do not pray as we read in the Bible, Muslims continue to pray in a similar way to the prophets, as intended by the Creator of the heavens and the earth.

Excellent quotations n we need to realize that n recognize it n not to ignore it!

I want to Know more about Islam

There is no strict position to pray in Christianity. Elijah lifted up his hand to heaven and prayed. Jesus lifted up his hands to heaven, gave thanks and multiplied the bread and fish. Christian also go to their knees to pray at any time the spirit of God directs them. The ways of Christians are directed by the spirit of God base on the situation not a strict copying of the old always.