Muhammad: A man who excelled in all roles (part 2 of 2): Fulfilling his Mission in an Excellent Way

Description: A brief look at a few of the roles at which Prophet Muhammad excelled, including that of a religious leader, statesman and teacher. 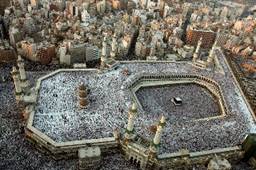 In part one we looked at Prophet Muhammad’s early life to see what made him a man admired by millions both across the centuries and across the globe.  We will now examine some of the roles he took and excelled at, for the benefit of his fledgling community and as a mercy for humanity.  Before he died Prophet Muhammad, may the mercy and blessings of God be upon him, was the leader of a unified state that was ever stretching and in spite of this, he lived simply and concerned himself primarily with completing his mission and worshipping God.  The roles he took on and those most often mentioned in books, essays and lectures about Prophet Muhammad always took second place to, or were a consequence of, his mission to spread Islam.

Prophet Muhammad was first and foremost a religious leader.  One definition of a prophet is "one who proclaims ideas central to the human experience"[1], with attention to a particular time and place.  It has been said that the mark of a great prophet is the profound attraction of his ideas for those to whom they are addressed.  1400 years before this was written Prophet Muhammad was indeed displaying these qualities.

Prophet Muhammad excelled in the role of a teacher.  He was chosen by God to be the teacher of Muslims and was given the responsibility of reciting and conveying the message to all of humankind.  Being a teacher requires special skills.  Prophet Muhammad was a teacher under many different circumstances with all levels of students.  He understood the importance of education and even allowed some prisoners of war to secure their freedom by teaching the illiterate amongst his followers to read and write.[2]  His beloved wife Aisha said, ‘His character was just (a reflection of) the Quran’.[3]  He taught it and lived it.  Prophet Muhammad taught the fundamentals of Islam and at the same time he was a role model.  His personal life complimented his teaching.

O Messenger, announce that which has been revealed to you from your Lord, and if you do not, then you have not conveyed His message. And Allah will protect you from the people. Indeed, Allah does not guide the disbelieving people.  (Quran 5:67)

True to his covenant with God, Prophet Muhammad transmitted the text of the Quran, he interpreted it, and it was this understanding of the revelation that formed the basis of all the Islamic sciences.  He founded a new spiritual and religious community, taught many followers and created a means for the continued transmission of Islam.  Prophet Muhammad was by all standards an excellent religious leader.  Prophet Muhammad’s success as a prophet and religious leader is described in the words of W.  Montgomery Watt, "…by God's grace he has been enabled to provide millions of men with a better religion than they had before they testified that there is no god but God and that Muhammad is the messenger of God."[4]

Prophet Muhammad used the conceptual framework found in the Quran to found a working community.  He organized a Muslim society in the small city to become known as Medina.  Prophet Muhammad was not only a prophet and religious leader he was now also a statesman.  The Merriam Webster dictionary defines a statesman as one versed in the principles or art of government, and a wise, skillful and respected political leader.  This was a role in which Prophet Muhammad excelled.  He translated God’s law into state law, the first example of which was the constitution of Medina.   The policies and institutions he set in place in Medina enabled the initially small community to become the heart of a magnificent state.  The Muslim nation expanded with remarkable speed because its remarkable leader built a society based on the Islamic concepts of justice and tolerance.[5]

Prophet Muhammad did not achieve this alone; he surrounded himself with capable and trustworthy people.  He excelled at the role of an administrator and practiced the art of delegating.  Prophet Muhammad understood social dynamics and was always able to choose the right person for the job at hand.  He was known to be politically creative in the areas of conflict resolution and diplomacy.  He developed a sophisticated intelligence network in order to keep abreast of political and military affairs in the regions surrounding his new nation.  He used this intelligence to make correct and fact based judgments.  It was Prophet Muhammad’s implementation of sound policies that enabled the fledgling nation to withstand the shock of his death.

Prophet Muhammad used his remarkable understanding of international affairs to negotiate treaties and resolutions that were beneficial to the Muslim nation, even relinquishing small military considerations to strengthen long term political positions.   The ‘shy shepherd boy’ had grown into one of history’s most effective generals.  He excelled at military leadership.  In the short space of just ten years Prophet Muhammad had fought eight major battles.  He so transformed his armies and the military warfare of Arabia that his successors were able to defeat the armies of Persia and Byzantium to establish the Caliphate of Islam.[6]

Prophet Muhammad’s most important role was to convey the message of Islam, that God is one, without partners, sons or daughters, and He alone deserves worship.  He excelled at this role and many others even though he was completely human with normal human limitations.  He was a statesman, administrator, diplomat, teacher, military leader and reformer.  Prophet Muhammad was a man who excelled in many roles.

[6] R A Gabriel, 2007, Muhammad: The Warrior Prophet in, MHQ: The Quarterly Journal of Military History.

Previous: Muhammad: A man who excelled in all roles (part 1 of 2): Not to Worship but to Emulate