Description: Mosques need to face the challenges of the 21st century by embracing the original role of the mosque in the Muslim community. 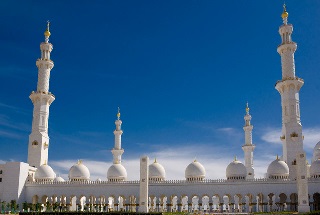 As we learned in Part 1, from the beginning of Islamic history the mosque was the cornerstone of the Muslim community.  It was not established simply as a house of prayer.   It is easy to arrive at this conclusion because God gave the nation of Muhammad a unique gift.  The majority of the globe, with very few exceptions, is a place of prayer.  Buildings, specific monuments and mosques, are not required to fulfill this need. The Prophet Muhammad, may the mercy and blessings of God be upon him, said:

"The (whole) earth has been made a mosque (or a place of prayer) and a means of purification for me, so wherever a man of my Ummah[1]  may be when the time for prayer comes, let him pray."[2]

Therefore one would assume that the mosque is more than just a sheltered area to pray in.  It is of course, and we must not overlook this, a place where Muslims, irrespective of their race or ethnicity, gather together 5 times per day.   This conveys a subtle message about the importance of staying together, united as one nation of Muslims.  Unity is particularly important in the 21st century because more than ever before the Muslim nation is disunited and spread throughout the globe.

But time and circumstance both have the habit of making small changes and small changes happened to the role of the mosque as history swept forward.   As communities in Muslim nations became bigger, more than one well was required, more than one school, more than one marketplace and more than one mosque.  In fact mosques were seemingly built on every corner but many of them became little more than places of prayer.  The larger mosques continued to fulfil their various functions so in Muslim countries the mosque will often serve the same purpose for which it was established nearly 1500 years ago.  Things are different in the West however, while Muslims might have their own shopping areas, restaurants and schools these are not the places that traditionally give and maintain a Muslim sense of identity.   That place is the local mosque.

It is in the mosque that a Muslim keeps his spirituality alive, strengthens the bond with his Creator, meets and communicates with his fellow Muslims and renews his sense of belonging.  Sadly many mosques currently serve as places of worship, for breaking the fast during Ramadan, and little else.  However if mosques throughout the world reverted to their traditional purpose and place in Muslim society they could bring about great social change and influence non-Muslims to rethink the predominating views of Islam prevalent today.  To be the heart of a vibrant Muslim society mosques need to face the challenges brought about by the globalisation and growth of the 21st century.

First and foremost is the challenge of offering a welcoming atmosphere.  To perform a useful function in the Muslim society mosques of the 21st century need to throw the front door open to all sections of society, just as the first mosque did.   Women, mothers with young children, the elderly, the youth, the poor and disenfranchised and non-Muslims interested in Islam should find the mosque a welcoming place.  The mosque and its surrounds typically referred to in the West as the Islamic centre could house such facilities as a cafeteria, a sports facility most particularly for the youth, a library with computers and internet, classrooms, halal food store, and a child minding centre so that men and women can enjoy the educational and sports facilities without worrying about their children.  The mosque could distribute aid to the poor and the needy. The modern mosque should be the focal point of a Muslim’s life.  It should be a welcoming place for all Muslims, and all those interested in finding out about Muslims and Islam.

Throughout the Muslim world many mosques have become tourist attractions.  They are known for their beautiful and often ground breaking architecture but sadly those most frequently visited by tourists are no longer houses of prayer.  The innumerable small mosques located in every neighbourhood in many Asian and Middle Eastern countries are uninviting to non-Muslims, tourists and women alike.  In larger cities cultural and Islamic centres have been built specifically targeting the needs of non-Muslims.  The needs of Muslims are often met by Zakat foundations and other charity organisations.  Gone are the days when small mosque communities looked after each other.  This is true throughout the western world too.  We have all seen the signs that relegate women to back entrances and many non-Muslims have kept walking when confronted by groups of men standing outside mosque entrances.

In their research for the documentary film Unmosqued the film makers found some unsettling statistics about the mosques in America.  Mosques they found are under-financed and understaffed.  While mosque attendance is higher than other American religious congregations, mosque budgets are less than half the budget of other congregations.  Only 44% of all Imams are full-time and paid.  Half of all mosques have no full-time staff.  Program staff such as youth directors or outreach directors account for only 5% of all full-time staff.  Only 3% of mosques consider "New Muslim" classes a top priority.

It appears then that the challenges for the mosque in the 21st century, in both the Muslim and western spheres is to make the mosque a more inclusive space.  In the time of Prophet Muhammad it was not unusual for the homeless to sleep in the mosque whilst matters of state were discussed in an area close by.  Sadly nowadays some mosques are locked up between prayer times.

A great example of a 21st century mosque blending tradition with modernity is the Sheikh Zayed Grand Mosque Centre opened in 2008 in the United Arab Emirates.  It is managed according to the most modern standards and its collections and features include a state of the art library equipped with modern facilities for the development of research and knowledge.  Cultural and social events are organized and these include seminars, lectures, exhibitions, courses for teaching the Quran, Islamic architecture, Arabic calligraphy and Arabic syntax, as well as competitions on Quran recitation and the call to prayer.  The mosque, in the traditional spirit, reflects an informed understanding of religions based on respect, stemming from the belief that Islam is a religion of tolerance and love.  The Mosque is a welcoming, humanitarian space open to all visitors.

[1] The Arabic word Ummah can be translated to nation.

Previous: The Mosque (part 1 of 2): More than a Place of Prayer

Yes, we need that change. We have such a wonderful infrastructure in place that if utilized to its full potential all the people can be united. But unfortunately the situation today is such that a Muslim coming for a prayer even 5 times a day hardly knows 20% of people in the mosque. If such is the case how is the Muslim Ummah going to unite and how other people will get attracted to Islam. We seriously needs to rework and bring awareness regarding this.