Description: A brief look at the history of mosques and their function in the history and spread of Islam. 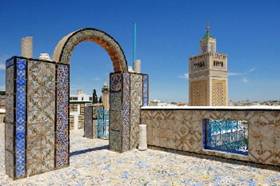 The mosque or the building that Muslims refer to as the masjid is a familiar sight in most parts of the world.  No matter what country or era, the mosque is built in it is always renowned for its unique architecture and noble ambiance.  In addition due to the sweeping nature of globalization most people know that the mosque is a house of worship; the place where the Muslim faithful offer prayer.  But the mosque is much more than that.  From the beginning it always fulfilled many needs and God willing it will continue to do so until the end of time as we know it.

An orientalist, and strong evangelical Christian, Scottish colonial administer Sir William Muir (1819 1905CE) was for many years the West’s leading scholar of Islam despite the fact that he was negative and critical of Islam.  However in his book, published in 1852, The Life of Mahomet, he described the role of the mosque in Muslim society quite brilliantly.  From the description, even from a man such as this, we are able to see that the mosque was always meant to be more than a place of prayer.

"Though crude in material, and insignificant in dimensions, the Mosque of Muhammad is glorious in the history of Islam.  Here, the Prophet and his Companions spent most of their time; here, the daily service, with its oft-recurring prayers was first publicly established; and here, the great congregation assembled every Friday, listening with reverence and awe to messages from Heaven.  Here, the Prophet planned his victories; here he received embassies from vanquished and contrite tribes; and from hence issued edicts… "[1]

In 622 CE, immediately after the migration from Mecca to Medina, the Muslims built the ‘Prophet’s Mosque’, and the Prophet himself participated in its construction.   From that moment the mosque became a focal point of any Islamic city.   It became a place of worship, a meeting place, an educational institute, a place of social activities and a place of rest.  The mosque became the centre of ritual, social, political and cultural life.  There is however one function the mosque does not fulfil - it is forbidden to engage in business or trading transactions within the mosque confines.

Although business could not be conducted in the mosque, towns and villages complete with markets and merchants would often be built around the mosque.  This was due to the mosque being the centre of daily life.  Prayers were conducted five times a day and the local people would hear the latest news both through the sermons and groups that gathered in and outside the mosque.

Throughout the history of Islam the mosque has played a major role in the spread of Islam and the education of the Muslims.  Wherever Islam took hold, mosques were established and basic education began.  Mosques taught the people (men, women, boys and girls) not only to recite the Quran and understand Islamic rulings but to read, write and form opinions and debate.  Education via the mosques follows the tradition established by Prophet Muhammad.  The Prophet’s Mosque was a school and a hostel for the poor and wayfarers.

"In scarcely any other culture has the literary life played such a role as in Islam.  Learning (ilm), by which is meant the whole world of the intellect, engaged the interest of Muslims more than anything… The life that evolved in the mosques spread outward to put its mark upon influential circles everywhere."[2]

In 859CE a university was established in the Qarawiyin Mosque in the city of Fes Morocco.  It is considered by many to be the oldest university in the world.  There were three separate libraries containing books on subjects such as religion, science, intellect, and languages.  The mosque conducted classes in various subjects including grammar, rhetoric, logic, mathematics, and astronomy and quite possibly history, geography and chemistry.[3]

Not only were mosques the perfect location for education, they also housed the Islamic court system.  Judges and jurists would meet the daily legal needs of the community as well as delivered legal opinions, and conducted research.  Due to very little bureaucracy, the court system was efficient and for the most part plaintiffs and defendants represented themselves.  Legal interpretation was left up to the judge who would strive to make decisions based on the Quran and the authentic Sunnah.   Once again Morocco’s al-Qarawiyin Mosque is a perfect example of a mosque being the centre of life and learning, so too is Egypt’s Al-Azhar Mosque that continues to this day to exert an influence over the daily life of Egyptians.

In many places throughout the rapidly expanding Muslim world the mosque became the source of water.  Islam requires believers to perform ritual washing before prayer thus the mosque courtyard has traditionally contained water fountains.  The decorative effect of water became central to Islamic architecture thus intricate and decorative pools and fountains can be found across the Islamic world and Andalusia.  The Sultan Ahmed mosque in Istanbul Turkey and the Mosque of Cordoba in Spain contain splendid examples of the decorative effect of water.  Wells and fountains in mosques cleanse the body and cool the air and in times past supplied water to the local community.

The mosque is the cornerstone of the Muslim community.  They were rarely used as places solely for prayer but served as community centres.   People went to the mosque for education both religious and secular, to settle disputes and visit the library.  They went to the mosque to pray, and to rest in secure and quiet gardens and buildings.  Mosques were places of rest for the poor and destitute.  Mosques traditionally distributed food and clothing to the needy.  They taught countless generations how to read and memorise the Quran and other Islamic sciences.  The mosque was the meeting place and the source of news in times of trouble and strife.  In short the mosque was the centre of the Muslim society.

Do mosques still perform these functions? What is the role of the mosque in the 21st century?  We will answer these questions and more in part 2.