Description: A discussion concerning verses 15-18.  This includes a description of the qualities of those who will achieve everlasting bliss with an emphasis on the importance of worshipping God alone. 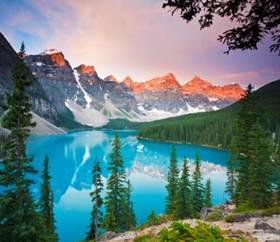 In verse 15, God reminds us of the worth of this life as compared to the Hereafter. This life may have many wonderful things however what is waiting for those who are pious and remember Him is like nothing one can ever imagine.

3:15  Say, "Shall I inform you of something better than that? For those who fear God will be gardens in the presence of their Lord beneath which rivers flow, wherein they abide eternally, and purified spouses and approval from God.  And God is Seeing (i.e.  aware) of (His) slaves."

At this point we understand that although God has provided us with a most wondrous and beautiful abode here on earth it is far from perfect.  We are burned by the sun’s harsh rays even as it warms and nourishes us, bugs can ruin our enjoyment in natural environments sometimes with lethal bites or by spreading diseases, natural disasters transform stunning vistas into ruin and decay and of course humankind itself is responsible for destroying our most beautiful habitat.  This is not going to happen in Paradise.  Our serenity is everlasting, beautiful remains beautiful.  In addition to this we are provided with purified spouses.  We are companions for each other, there is no death and there are no worldly conditions such as menstruation or defecation.

Thus we ask ourselves, who is it that deserves this blissful life everlasting? God answers our thoughts.

3:16  Those who say: "Our Lord! We have indeed believed, so forgive us our sins and save us from the punishment of the Fire."

Those who have believed in One God and submitted themselves to Him are the ones who deserve this everlasting blissful life, the believers.  They desire very much to be a part of this wonderful and awe inspiring life everlasting and God describes their actions in more detail so that there can be no room for doubt.  If a person desires to live forever in Paradise then that person must strive hard to please God.  Verse 17 further describes what sort of people will be saved from the punishment of the Fire.

3:17  (They are) those who are patient, those who are true (in Faith, words, and deeds), and obedient with sincere devotion in worship. Those who spend (in the way of God) and those who pray and beg God’s Pardon in the last hours of the night.

These are the believers who are patient.  Ibn Qayyim explained[2]  that having patience means having the ability to stop ourselves from despairing, to refrain from complaining, and to control ourselves in times of sadness and worry.   Prophet Muhammad’s son in law Ali ibn Abi Talib defined patience as "seeking God’s help".[3]

Their other attributes include being faithful and obedient; they follow the laws and commandments of God with sincerity and to the best of their ability. They remember God and are grateful.  "Therefore, remember Me (by praying, glorifying, etc.).  I will remember you, and be grateful to Me (for My countless Favours on you) and never be ungrateful to Me." (Quran 2:152).  They spend from their wealth on family members, neighbors and strangers.  They are kind, help the destitute, and comfort the needy.  And among those deserving of life everlasting are those who pray in the last part of the night.

Prophet Muhammad tried to instill in us, his followers, the benefits and desirability of praying in the last part of the night.  He said, "The Lord descends every night to the lowest heaven when one-third of the night remains and says: ‘Who will call upon Me, that I may answer Him? Who will ask of Me, that I may give him? Who will seek My forgiveness, that I may forgive him?’"[4]

If you read this chapter of Quran from the beginning you will notice that God starts it off by reminding us that there is no God but He.  He says, "…La ilaha illa Huwa (none has the right to be worshipped but He), Al-Hayyul-Qayyum (the Ever Living, the One Who sustains and protects all that exists)" (Quran 3:2). And now just a few verses later he reminds us again.

There is no god worthy of worship except He.  There is no authority worthy of obedience except He.  Here at verse 18 God Himself bears witness that there is no god but He.  Just as there is nothing greater than God there is no statement truer than this one.  None has the right to be worshipped but He.  This is the crux of the matter, the essence of Islam.  There is One God and He alone deserves worship.  In the early days of Islam and of course in the 21st century there are many people who believe in God the Creator, but set up partners with Him or rivals to Him.

"Do they associate with Him those who create nothing and they are [themselves] created? No help can they give them, nor can they help themselves." (Quran 7:191-192)

Next God reminds us that He maintains His creation with justice.  "We sent Our Messengers with clear signs and sent down with them the Book and the Measure in order to establish justice among the people…" (Quran 57:25).  God is fair and equitable and the Arabic word used in verse 18 is qist.  It is usually translated as justice but does in fact encompass not only justice but also equity and balance.  Do you wonder why we are just the right distance from the sun?  A little closer and we would burn up, a little further away and we would freeze.  God maintains His creation with justice, with balance.   Imagine the precision and timing that allows the world and all that is in it to function.  Complex systems run perfectly.  God concludes by repeating the phrase, "None has the right to be worshipped but He, the All Mighty, the All Wise."