The Probability of Macroevolution

Description: After the tremendous advancements and achievements made during the third millennium in the field of genetics, we are now in a better position to assess the chances for macroevolution of evolution theory to have occurred during the history of the universe. 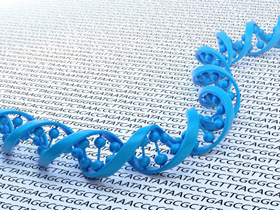 Science has accomplished enormous progress and achievements in genetics since the turn of the 21st century. Scientists have sequenced and mapped the entire genomes of more than 2800 organisms/species including human, and the count is on.[1]

Macroevolution of evolution theory tells us that humans, as well as other multicellular forms of life, have evolved from primitive single-celled organisms that fall under the kingdom of prokaryotes or even more primitive.[2] Prokaryotes are single-celled organisms that have no true nucleus as their genome is not contained within a membrane nor distinct from the rest of the cell. They are the earliest and most primitive forms of life found on earth.[3] Is there a chance for this evolution to have taken place from a simple, single cell to a human being during the age of the universe?

You can think of nucleotides as alphabets of 4 letters pool, and codons as words of 3 letters length.

The sequence of these nucleotides within genes is what defines the characteristics and functions of a living organism and its nature; will it be a bacterium, a plant, a fly, a fish, or a human. The sequence of this coding in human genes, as well as other organisms, is so sophisticated, precise, and well organized that it is comparable to the sequence of alphabets in a Shakespeare’s poem, a novel, a thesis, a computer program, or an encyclopedia of 2 million words (or 2 volumes).

According to macroevolution, this precise sequence, coding, has come into being by random mutations[7] and natural selection.

Maximum Possible Mutations During the Age of the Universe

We will try to find out here the maximum number of mutations that can occur during the age of the universe based on assumptions that favor evolution.

The shortest generation time reported to date is the generation of Pseudomonas natriegens, a marine bacterium with a generation time of 9.8 minutes.[9] Nevertheless, going once again to the utmost in favor of evolution, we can assume that we are getting a new generation every one second. Thus, during the age of the universe,[10] which is about 15 billion years,[11] the maximum number of generations that can be reached is:

The last piece of information needed to calculate the maximum number of possible mutations is the population of these single-celled organisms. For that we will assume a very large number that leaves no place for more; the number of atoms in the observable universe that is about 1082.[12]

Thus, based on previous results and generous assumptions, the maximum number of mutations that may occur in the entire universe and during its age is:

Number of Random Mutations Required for the Evolution into a Human

The genes of human genome consist of approximately 34 million nucleotides.[13]

The largest genome in simple, single-celled organisms, prokaryotes, is about 13 million nucleotides.[14]

In genes, each amino acid –the building block of proteins that are vital to all living processes– is coded for by 3 nucleotides, which is called a codon. 21 million nucleotides means 7 million codons.

Random mutations have one of three effects: Neutral, Deleterious (harmful), or beneficial. Only beneficial mutations can contribute to the evolutionary process.

Therefore, the probability for 7 million codons to mutate randomly with beneficial mutations is:

Therefore, we need more than 10100,000 (1 with 100,000 zeros after it) random mutations to occur so that a simple, single-celled organisms may evolve into a human, while we can only get less than 10110 (1 with 110 zeros after it) mutations during the age of the universe, even when the entire universe is a stage for this evolutionary process.

All these calculations were based on human genes –that constitute less than 2% of the genome– without taking into consideration the junk region that consumes approximately 98% of the human genome, which turned out not to be junk anymore. The ENCODE Project Consortium was able to assign biochemical functions for 80% of the human genome and found that approximately 20% of it regulates the genes. The results of the five-year ENCODE project were published in 2012 in the journals Nature, Science, Genome Biology and Genome Research.[23] The ENCODE consortium’s 442 researchers, situated in 32 institutes around the world, used 300 years of computer time and five years in the lab to get their results.

Hoping this study was beneficial in shedding some light on this crucial topic.

[Comments, rebuttals, and critics on this article are welcomed. You may send them to the author at comments@i-g.org].

[4] A genome is an organism’s complete set of DNA or RNA, including all of its genes. Each genome contains all of the hereditary information needed to build and maintain that organism.

[7] Mutation types include: substitution, insertion, deletion, frameshift, as well as other types (http://evolution.berkeley.edu/evosite/evo101/IIIC3aTypes.shtml).

[10] Why not during the age of the earth alone? Simply, to eliminate any assumption that genome codes were passed down to the earth from outer space.

[15] There are 64 codons. On average, each amino acid and the stop code can be coded for by one of three codons [see references in footnote # 17].

[18] If mutation falls outside genes then obviously it is neutral to genes. It is noteworthy that for most multicellular organisms with a genome size larger than 100 million nucleotides, their genes consume only less than half of the genome (http://www.ncbi.nlm.nih.gov/pubmed/18384817 and http://www.tcm.phy.cam.ac.uk/~tmf20/PUBLICATIONS/jtb_07.pdf).

[21] This chance of 20/21 of being beneficial can also be applied in the rare case of inserting complete codons or large scale coding. Because all studies have confirmed that only a small portion of random mutations (in all their kinds) are beneficial, while the majority of them are either harmful or neutral. That is obvious since they are random. Thus, giving it a chance of 20/21 for being beneficial is a very generous assumption (http://www.nature.com/scitable/topicpage/genetic-mutation-441, http://www.ncbi.nlm.nih.gov/pmc/articles/PMC1871816/, http://www.ncbi.nlm.nih.gov/pmc/articles/PMC1617134/, http://global.britannica.com/EBchecked/topic/399695/mutation, http://www.nature.com/hdy/journal/v84/n4/abs/6887250a.html, http://www.genetics.org/content/148/4/1667.full.pdf, and http://www.sciencemag.org/site/feature/data/pharmacia/1999/Cascalho.xhtml).

[22] To calculate large digits, you may need a special calculator such as the one at http://www.ttmath.org/online_calculator.