Liquid Gold - The Benefits of Honey

Description: The Quran mentions about honey that it is a ‘healing for humankind’.  This article elaborates some of the known benefits of honey. 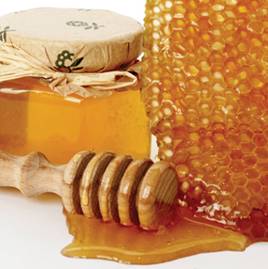 The benefits of honey don’t just stop at the satisfaction of our taste buds.  The powerful healing attributes of honey have long been used to promote health and healing.  Both the holy Quran and Hadiths (Prophetic traditions) refer to honey as a healer of disease.  In the Quran we read, “And thy Lord taught the bee to build its cells in hills, on trees and in people’s habitations… there issues from within their bodies a drink of varying colors, wherein is healing for humankind.  Verily in this is a Sign for those who give thought.”

Additionally, in Sahih Bukhari we read that the Prophet, may the mercy and blessings of God be upon him, said: “Honey is a remedy for every illness and the Quran is a remedy for all illness of the mind, therefore I recommend to you both remedies, the Quran and honey.”

Honey offers incredible antiseptic, antioxidant and immune boosting properties for our body and health.  It not only fights infection and helps tissue healing but also helps reduce inflammation and is often used for treating digestive problems such as indigestion, stomach ulcers and gastroenteritis.

Researchers from around the world are discovering new and exciting medical benefits of honey and other healing items produced in the hive such as propolis, royal jelly and bee pollen.

As in all foods, the health benefits of honey largely depend on its quality.  Raw honey, the purest form, comes straight from the comb and is placed into the honey extractor or press.  This is unheated, unpasteurized and unprocessed honey.  Because it is raw, it tends to have fine textured crystals in it that occur naturally when glucose, one of three main sugars in honey, spontaneously precipitates out of the super saturated honey solution.  If your raw honey crystallizes, simply place the container in hot water for 15 minutes and this will help return it to its liquid state.

Most honey found on supermarket shelves today is not raw honey, but rather commercial honey which has been heated and filtered so that it has a smoother, more appealing look to it.  When honey is heated and processed in such a way it will maintain a long shelf life but the vitamins and minerals which benefit the body’s immune system are largely destroyed in the process.  As such, it is not as nutritious as raw honey.

Honey varieties differ widely in color, texture and flavor.  Comb honey, taken straight from the hive, is the rawest and purest form of honey.  Its characteristic hexagon-shaped wax cells that are filled with honey can be chewed like gum.

Liquid honey is the most recognizable and easiest to find.  It is pressed from the comb and filtered to remove any particles such as pollen grains, wax or crystals.

Creamed honey, also known as whipped honey, granulated honey or honey fondant, has a smooth and creamy consistency.  Cream honey does not drip as does liquid honey, and can be spread easily.

The color of honey, largely determined by the floral source of the nectar from which the bees have collected it, is graded into light, amber and dark categories, with darker varieties being more medicinally potent.  In general, lighter honey varieties, such as wild flower honey that has been collected from the nectar of several flowers, have a milder flavor.  The darker varieties, such as buckwheat honey, collected from the nectar of the flower of the buckwheat grain, have a more robust and stronger flavor.  Approximately 23 common varieties of honey include buckwheat, clover, linden, sage, tupelo and wildflowers.

In addition to carbohydrates, honey contains protein (including enzymes) and amino acids, and is high in vitamins and minerals.  Some of the vitamins present in honey are B6, thiamin, niacin, riboflavin, pantothenic acid and certain amino acids.  The minerals include calcium, copper, iron, magnesium, manganese, phosphorus, potassium, sodium and zinc.  While the amino acid content is minor, the broad spectrum of approximately 18 essential and nonessential amino acids present in honey is unique and varies by floral source.  Also present are polyphenols, that can act as antioxidants and play a role in cleansing the body of free radicals and reactive compounds that can contribute to serious illness such as cancer and heart disease.  It is believed that honey contains a similar range of antioxidants that are found in green vegetables and fruit including broccoli, spinach, apples, oranges and strawberries.

To fight high cholesterol, look no farther than buckwheat honey.  In their 2004 study, Effect of honey consumption on plasma antioxidant status in human subjects, biochemist H.  Gross and his colleagues from the University of California, Davis, examined the blood results of 25 participants who were each given four tablespoons of buckwheat honey daily for 29 days in addition to their regular diets.  At given intervals, samples taken from them following honey consumption showed that there was a direct link between the subjects’ honey consumption and the level of polyphenolic antioxidants in their blood.  With its high levels of mineral, vitamin and high antioxidant content, a small amount of buckwheat honey added daily could help lower cholesterol by increasing blood levels of protective antioxidant compounds in the body.

People with diabetes often question whether they can take honey.  In his book, The Honey Revolution – Restoring the Health of Future Generations, Ron Fessenden MD says that a tablespoon of honey consists of nearly the same carbohydrate content as a cupful of quartered raw apple, and that a diabetic patient can be assured that consuming honey will produce a significantly lower blood sugar response than an equivalent amount of sugar or other glucose-rich starches.  The balance of sugars and the presence of multiple co-factors in honey serve to make this natural food quite different from table sugar, high-fructose corn syrup (HFCS) or other artificial sweeteners.

Dr.  Fessenden goes on to say that when consumed regularly over several weeks or months, honey will lower blood sugar and glycated hemogobin levels.  He says that generally adding three-to-five tablespoons of honey a day to the diet and eliminating most sugar and HFCS should be recommended to people with Type 2 Diabetes.

For centuries, pure honey has been used in children as a home remedy to help alleviate some of the symptoms associated with the common cold.  In the December 2006 study on cough suppressants, Effect of Honey and Dextromethorphan on Nocturnal Cough and Sleep from Penn State College of Medicine researchers compared honey to over-the-counter medicines for symptomatic relief of upper respiratory infection, such as cough, in children 2-to-18-years of age.  The conclusion was that honey provided a safe alternative for children.  Honey outperformed cough medicine in offering a better night’s sleep and reducing severity of cough.  Across the board, parents in the study rated honey as significantly better than cough medications or no treatment for symptomatic relief of their children’s nighttime cough and sleep difficulties.

The American Academy of Pediatrics and other children’s health professionals have raised concerns about common over-the-counter remedies, the safety of these cough suppressant products and whether the benefits justify any potential risks from the use of these products in children, especially in children under 2 years of age.  Ian Paul MD, M.Sc., a pediatrician, researcher and associate professor of pediatrics at Penn State College of Medicine and Penn State Children’s Hospital said, “Additional studies should certainly be considered, but we hope that medical professionals will consider the positive potential of honey as a treatment...” However, do not feed honey-containing products or use honey for infants under one year of age.

In caring for a wound, the American Journal of Dermatology, in Honey in the Treatment of Wounds and Burns says honey applied topically to a wound can promote healing just as well, or in many cases better than conventional ointments and dressings.  Its anti-inflammatory properties reduce swelling and pain while its antibacterial properties prevent infection.

To keep your energy levels up use honey as an excellent source of easily assimilated energy; honey is one of the most effective forms of carbohydrates to ingest just prior to exercise and to replenish your energy levels.  The glucose contained in honey is absorbed by the body quickly, giving an immediate energy boost, while the fructose content is absorbed more slowly, providing sustained energy.  Honey has also been found to keep levels of blood sugar fairly constant compared to other types of sugar, and it appears to be a carbohydrate source that is relatively mild in its effects upon blood sugar compared to other carbohydrate sources.

Honey has been used for thousands of years to help calm a child’s cough, aid in cholesterol relief and digestion and to promote healing of wounds.  Honey, in its purest form truly is a head-to-toe cure that will surely be used more and more in the years to come.