Prophets of the Quran: An Introduction (part 1 of 2)

Description: Belief in the prophets of God is a central part of Muslim faith.  Part 1 will introduce all the prophets before Prophet Muhammad, may the mercy and blessings of God be upon him, mentioned in the Muslim scripture from Adam to Abraham and his two sons. 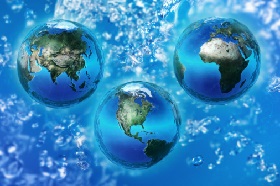 The Quran mentions twenty five prophets, most of whom are mentioned in the Bible as well.  Who were these prophets? Where did they live? Who were they sent to? What are their names in the Quran and the Bible? And what are some of the miracles they performed? We will answer these simple questions.

Before we begin, we must understand two matters:

a.     In Arabic two different words are used, Nabi and Rasool.  A Nabi is a prophet and a Rasool is a messenger or an apostle.  The two words are close in meaning for our purpose.

1.     Aadam or Adam is the first prophet in Islam.  He is also the first human being according to traditional Islamic belief.  Adam is mentioned in 25 verses and 25 times in the Quran.  God created Adam with His hands and created his wife, Hawwa or Eve from Adam’s rib.  He lived in Paradise and was expelled from there to earth for disobedience.  The story of his two sons is mentioned once in Chapter 5 (Al-Maidah).

2.     Idrees or Enoch is mentioned twice in the Quran.  Other than that little is known about him.  He is said to have lived in Babylon, Iraq and migrated to Egypt and that he was the first one to write with the pen.

3.     Nooh or Noah is mentioned 43 times in the Quran.  He is said to be from Kirk, Iraq.  Polytheism (shirk) appeared for the first time among his people who lived close to the present day city of Kufa, in the south of Iraq.  His wife was an unbeliever as mentioned in Chapter 66 (At-Tahrim).  His son also chose disbelief and was drowned in the flood.  The story is found in Chapter 11 (Hud).

One of his great miracles was the Arc which he built on God’s command that rested on Mt.  Judi which is said to be between the Syrian-Turkish border today near the city of Ayn Diwar.

4.     Hud is said to be Heber in English.  He is mentioned 7 times in the Quran.  Hud is the first person to have spoken Arabic and was the first Arab prophet.  He was sent to the people of Aad in the area known as Al-Ahqaf which is around Hadramaut in Yemen and the Ar-Rub al-Khali (the Empty Quarter).  God destroyed them by a fierce wind that blew for 8 days and seven nights.

5.     Salih is mentioned 9 times in the Quran.  He was an Arab prophet sent to the people of Thamud who lived in an area known as Al-Hijr between Hijaz and Tabuk.  Al-Hijr was the ancient name.  Today, the place is known as "Madain Salih" in Saudi Arabia and is a UNESCO world heritage site.  They are magnificent structures literally carved in the mountains.  The people demanded he produce a female camel out of the rocks to prove his claim to being a prophet.  He did, and warned them not to harm it, but they killed it despite the warning of Salih.  A loud shriek – saihah - killed them all.

6.     Ibrahim or Abraham is mentioned 69 times in 25 chapters of the Quran.  His father’s name was Aazar.  They lived in the city of Ur in the Chaldean kingdom.  He escaped Ur to Harran, in the north of the Arabian peninsula, in today’s Syria, when Nimrod, the king tried to burn him alive.  From Harran he went to Palestine with his wife Sarah and the son of his brother, Lot (Loot in Arabic) and his wife.  Due to a famine, they were forced to move to Egypt.

He later returned with Lot to the south of Palestine, Ibrahim settling in Bir Sab’a and Lot settled close to the Dead Sea.

Abraham then moved his second wife, Hagar, to Mecca with his son Ishmael and left them there at God’s command.  Mecca was a barren land and the well of zamzam was provided by God for their survival.  The ancient tribe of Jurhum settled their due to zamzam.  Abraham is said to be buried in Hebron, Palestine.

7, 8.   Abraham had two sons: Ishaq or Issac and Ismael or Ishmael.  Issac is mentioned 16 times in the Quran whereas Ishmael is mentioned 12 times.  Issac lived with his father, Abraham, and died in Hebron, Palestine.  God ordered Abraham to sacrifice Ishmael.  He went to Mecca with his parents and was left there with his mother.  Abraham visited Ishmael several times in Mecca, and during one of those times, God ordered Abraham and Ishmael to build the Ka’bah (the Holy House).  Ishmael died in Mecca and was buried there.  Issac is the fore-father of the Jews and Ishmael is the forefather of the Arabs.

Next: Prophets of the Quran: An Introduction (part 2 of 2)

Alhamdulilah, im totaly impressed and this site has actually strengthen my faith towards Islam, may Allah have mercy on every Muslim and grant us paradise. Ameen