Hajj: A Celebration of Peace

Description: A simplified overview of pilgrim’s journey to Hajj. 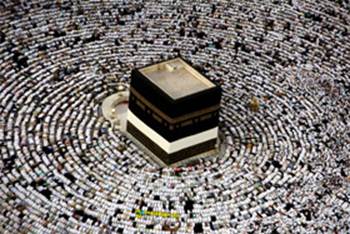 More than 2 million people surround me.  We all have one common goal, one purpose for being here together.  I do not stand out from anyone else.  There are no signs of wealth or greatness upon me.  No Rolex watch or Nike shoes to mark me as a rich person.  I am one person alone, in a sea of humanity.  I am black or white, yellow or brown, the colour of my skin is not important.  I am from Europe or Asia or South America, my homeland is any corner of this wide earth.  The people around me are young and old, male and female, rich and poor.  We represent humankind in our diversity, yet we are united.  We are unity in diversity.

I am at Hajj

Hajj is one of the five pillars of Islam.  Muslims declare that there is no god worthy of worship but Allah and that Muhammad is His messenger; they pray, they fast, they pay obligatory charity, and they go to Hajj.  Hajj is a pilgrimage to the city of Makah in Saudi Arabia.  At the mosque and in the surrounding area, Muslims perform prayers and rituals.  Hajj is an obligatory act performed once in a lifetime by all mentally, physically, and financially able Muslims.

"And Hajj (pilgrimage to Makah) to the House (Kaba) is a duty that mankind owes to God, those who can afford the expenses (for one’s conveyance, provision and residence) ; and whoever disbelieves then God stands not in need of any of mankind, jinn and all that exists" (Quran 3:97)

This year, 2010, Hajj is in the middle of November.  Muslims from all over the world will gather to worship God.  They arrive in Saudi Arabia, by plane, bus, car, etc.  Some endure great hardship, others merely buy a first class ticket, but they come as equals.  People make this journey prepared to stand at the House of God (or Kaba) and affirm their love for God and His religion of Islam.

"And proclaim to humankind the Hajj (pilgrimage).  They will come to you on foot and on every lean camel, they will come from every deep and distant (wide) mountain highway (to perform Hajj)" (Quran 22:27)

The Hajj is several days of total devotion to the One God.  Muslims come together to celebrate His praises, ask for His forgiveness and demonstrate unity for His sake alone.

Throughout the Muslim world, Hajj has come to symbolise unity.  Although Muslims may be disunited due to many outside influences,  such as money, politics, border disputes  or other worldly concerns.  Hajj is the great leveller.  At Hajj, all Muslims are equal; nothing about the rituals they perform makes one person better than another.

More than 2 million Muslims stand in one place, wearing the same simple clothing, following the same rituals and saying the same words.  They are united in their devotion to God.  The black man stands next to the white man and they call on God with one voice.  The king stands beside the pauper and they declare their submission to the will of God using the same words.

Muslims from every corner of the globe are united in their submission to the will of God.  They cry out as if with one voice, "Here I am O God, here I am at your service, and You have no partner.  Here I am.  All praise, grace, and dominion belong to You.  You have no partner".  This supplication is said repeatedly by the pilgrims.  It is their answer to God’s call for the Muslims to perform Hajj.

These words are repeated with joy and reverence by all, regardless of status or class.  Some people are so overcome with emotion that they weep, others feel elated and happier then they have ever felt before.  Every person there feels that he is one person, alone among millions answering God’s call and God hears his supplication and sees his arrival.  The pilgrims feel amazed that they are the guest of the most Merciful God.  He or she attends this gathering by the invitation of God, not at the invitation of a government or an organisation, nor at the request of a family member or friend.

Hajj is performed because God has invited the believers to congregate together.  Regardless of place of birth, nationality, ethnicity, gender, or status, all are welcome, and all are equal in the sight of God.  The Muslims gather to meet one another and demonstrate to each other, and the world that they are united.  Unity in diversity.  They are united by their worship of One God.

"O humankind!  We have created you from a male and a female, and made you into nations and tribes, that you may know one another.  Verily, the most honourable of you with God is that (believer) who has At-Taqwa (piety, God consciousness).  Verily, God is All-Knowing, All-Aware." (Quran 49:13)

Islam is the religion of unity.  Repeatedly throughout the Quran God reminds the believers that they must remain united and seek strength through unity.  Hajj epitomises   this unity.  People from every race and colour come together in submission to the will of God.  Muslims are one brotherhood and they come together with a sense of purpose and a desire for peace.

"The believers are nothing else but brothers (in Islam).  So make reconciliation between your brothers, and fear God, that you may receive mercy." (Quran 49:10)

"And hold fast, all of you together, to the Rope of God (this Quran), and be not divided among yourselves, and remember God’s Favour on you, for you were enemies one to another but He joined your hearts together, so that, by His Grace, you became brethren (in Islam), and you were on the brink of a pit of Fire, and He saved you from it.  Thus God makes His Ayat (proofs, evidences, verses, lessons, signs, revelations, etc.,) clear to you, that you may be guided." (Quran 3:103)

Muslims gather together and their diversity is a wonder to behold.  The old stand with the young, the rich stand with the poor, people of all colours and nationalities stand shoulder to shoulder in prayer, and perform rituals side by side.  Prophet Muhammad, may the mercy and blessings of God be upon him, said, "In their love, kindness, and compassion for each other, the believers are like a human body.[1]  Muslims at Hajj are one people, they are a soothing sea of humanity, gathered together to worship One God.  Muslims turn their faces in one direction  and submit to the will of God.  They are united by their love of God, and united in their diversity.

good information,it really help me a lot because I just became muslim . Shukran for the information o o L __