First Chapter of the Quran 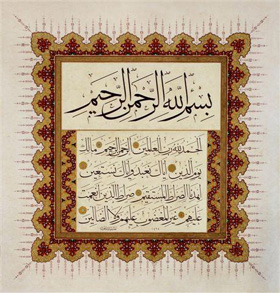 “I begin with the name of God, Most Gracious, Most Merciful

All praise is to God, Lord of all the worlds

Most Gracious, Most Merciful

Master of the Day of Judgment

Guide us to the straight path

The Path of those on whom You bestowed Your bounties

Not the path of those who incurred Your wrath or those who went astray.” (Quran 1:1-7)

Prophet Muhammad, may the mercy and blessings of God be upon him, told us, that this chapter in the Quran is unlike any other. Nothing like it was revealed in any previous scripture. When one recites this chapter sincerely they would be professing their belief as a true Muslim.

All praise is to God

When you state that all praise is due to God alone, you are in fact acknowledging that only He has all the attributes of perfection and that only He is the bestower of all the bounties that any of His creation enjoys.  And since gratefulness is the essence of worship, you are also acknowledging that He is the only one who deserves to be worshipped.

Lord of all the worlds

The Arabic word for Lord, Rubb, conveys a number of meanings that are not accurately captured by the English word Lord. It means that He is the one who owns, who creates, who sustains and who looks after all that exists.  The only relationship between Him and all creation is that He is the creator of all that exists.  He cannot therefore be the father of anyone in any real sense! To say that He is the Creator and yet the father of some of His creation is a contradiction in terms.  You don’t create your child, you beget him.  It is because of this that the Quran keeps reminding those who claim that God has children (the Arabs who used to say that the angels are the daughters of God, the Christians who say that Jesus is the son of God, and a Jewish sect who used to believe that Ezra is the son of God) that God is the Creator and Owner of everything.

Most Gracious, Most Merciful

The two Arabic words, Rahman and Raheem, for which these English phrases stand, are two intensive forms of a root word which conveys the meaning of mercy.  Rahman is more intensive than Raheem, and refers to God’s all-encompassing mercy, His mercy to all His creation in this life and the life to come.  Raheem refers to His special mercy to the faithful.  No created being can therefore be Rahman, but created beings can be described as Raheem in a limited and special sense of the word.

Master of the Day of Judgment

God is the Master of all days and all things, but while some people can have some limited mastership or even falsely claim to have it, no one can be, or claim to be master in any sense on the Day of Reckoning.  On that Day God will ask all of His creation: “To whom is sovereignty today?” And the answer will be “To God, the One who holds absolute sway over all that exists”.  This reminds us of the fact that this world is only a transient station on the road to the final abode where we shall either be rewarded or punished for what we do here.

The foregoing verses were like an introduction to this one.  It is as if you are saying: because we acknowledge the fact that all praise is to You, that You are the Lord of all the worlds, that You are Most Gracious and Most Merciful, and that You Alone are the Master of the Day of Judgment, we hereby declare that we worship none but You and seek help from none except You.   This verse emphasizes the fact that what is important is not only that You worship God, but that you worship none besides Him, because none except Him deserves to be worshipped.  Worship in the broader sense of the word includes that you obey none but Him in any absolute sense, love no one as or more than you love Him and pray to no one except Him. It also includes that you seek help from none but God; this doesn’t mean that you don’t extend or accept any help from any of God’s created beings in matters in which they have the power to help.  It only means that you believe that even when you give or receive such help that it is ultimately coming from God because nothing in this world happens without His will and power.  So it is from Him alone that you are ultimately turning for help, and it is on Him that you ultimately and absolutely depend.

Guide us to the Straight path

Having acknowledged all those truths about God, and having declared to Him that it is He Alone that we worship and ask for help, we now go on to ask Him to grant us the thing that we need most: knowing and taking the shortest path that leads to Him.  Having known who God is we are convinced that such guidance must come from Him, that it must be available to all who want to follow it, and that there must be no doubt about the fact that it is from Him.  That guidance, we know, is no where to be found in any complete way except in God’s words, the words that He revealed to His chosen Prophets like Noah, Abraham, Moses, Jesus and Muhammad, may God praise them all.  But we also know for sure that none of the books that contain that guidance is now at our disposal except one - the Quran.  It is to this Divine book that we must turn for a detailed description of the Straight Path that leads to our Lord.  This path is an absolute path that was given to each Prophet and Messenger of God and it does not change over the passage of time.

The Path of those on whom You bestowed Your bounties

The straight path described in the Quran is not a theoretical path; it is an actual path that some people before us have taken.  As Muslims, we believe every Prophet and Messenger of God preached the belief in the Oneness of God and that all worship was to be dedicated to Him alone.

Just as the Straight Path is described above in a positive way, the paths of those who deviated from it are described in a negative manner. We always ask our Lord to keep us away from the paths taken by two kinds of deviant people: those who knew the truth about religion and yet refused to act according to it, and there brought upon themselves the wrath of God. The second group of people were those who made their religion suit their whims and desires and are thus went astray.  The Quran tells us in some detail about their main deviations, among the greatest of which is that they have no great respect for God or His words: they ascribe to Him imperfect, even insulting attributes; they distort His words at will to make them suit their own wishes or preferences and they commit immoralities in the name of religion.

May Allah reward you abundantly

Truly the holy Quran review the truths to us..may Allah guide us to the right ðŸ‘‰ path

“The Messenger of Allah (saw) said: ‘Allah, the Mighty and Sublime, did not reveal in the Tawrah or the Injil anything like Umm Al-Quran (Al-Fatihah), which is the seven oft-recited, and (Allah said) it is divided between Myself and My slave will have what he asked for.” (Sunan Al-Nisa) Source: http://namesofallah.co.uk/surah-fatiha/

very nice explanation. I really liked this briefing of the quranic chapters.

I want to learn more about about Quran