Description: Modern science has discovered facts about the atmosphere mentioned in the Quran over 1400 years ago.

In the first verse God swears by the sky[1]  and its function of ‘returning’ without specifying what it ‘returns.’  In Islamic doctrine, a divine oath signifies the magnitude of importance of a special relation to the Creator, and manifests His majesty and the supreme Truth in a special way.

The second verse describes the Divine Act that made the sky a ‘ceiling’ for the dwellers of earth.

Let us see what modern atmospheric science has to say about the role and function of the sky.

The atmosphere is a word which denotes all the air surrounding the earth, from the ground all the way up to the edge from which space starts.  The atmosphere is composed of several layers, each defined because of the various phenomena which occur within the layer. 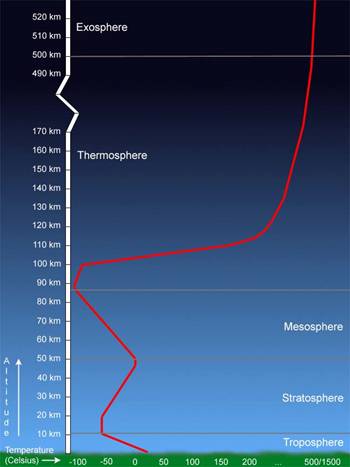 Rain, for one, is ‘returned’ to Earth by the clouds in the atmosphere.  Explaining the hydrologic cycle, Encyclopedia Britannica writes:

"Water evaporates from both the aquatic and terrestrial environments as it is heated by the Sun’s energy.  The rates of evaporation and precipitation depend on solar energy, as do the patterns of circulation of moisture in the air and currents in the ocean.  Evaporation exceeds precipitation over the oceans, and this water vapor is transported by the wind over land, where it returns to the land through precipitation."[2]

Not only does the atmosphere return what was on the surface back to the surface, but it reflects back into space that which might damage the flora and fauna the earth sustains, such as excessive radiant heat.  In the 1990’s, collaborations between NASA, the European Space Agency (ESA), and the Institute of Space and Astronautical Science (ISAS) of Japan resulted in the International Solar-Terrestrial Physics (ISTP) Science Initiative.  Polar, Wind and Geotail are a part of this initiative, combining resources and scientific communities to obtain coordinated, simultaneous investigations of the Sun-Earth space environment over an extended period of time.  They have an excellent explanation of how the atmosphere returns solar heat to space.[3]

Besides ‘returning’ rain, heat and radio waves, the atmosphere protects us like a ceiling above our heads by filtering out deadly cosmic rays, powerful ultraviolet (UV) radiation from the Sun, and even meteorites on collision course with Earth.[4]

"The sunlight that we can see represents one group of wavelengths, visible light.  Other wavelengths emitted by the sun include x-rays and ultraviolet radiation.  X-rays and some ultraviolet light waves are absorbed high in Earth’s atmosphere.  They heat the thin layer of gas there to very high temperatures.  Ultraviolet light waves are the rays that can cause sunburn.  Most ultraviolet light waves are absorbed by a thicker layer of gas closer to Earth called the ozone layer.  By soaking up the deadly ultraviolet and x-rays, the atmosphere acts as a protective shield around the planet.  Like a giant thermal blanket, the atmosphere also keeps temperatures from getting too hot or too cold.  In addition, the atmosphere also protects us from constant bombardment by meteoroids, bits of rock and dust that travel at high speeds throughout the solar system.  The falling stars we see at night are not stars at all; they are actually meteoroids burning up in our atmosphere due to the extreme heating they undergo."[5] 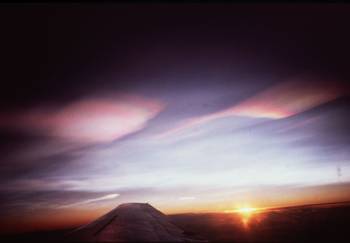 Encyclopedia Britannica, describing the role of Stratosphere, tells us about its protective role in absorbing dangerous ultraviolet radiation:

"In the upper stratospheric regions, absorption of ultraviolet light from the Sun breaks down oxygen molecules; recombination of oxygen atoms with O2 molecules into ozone (O3) creates the ozone layer, which shields the lower ecosphere from harmful short-wavelength radiation…More disturbing, however, is the discovery of a growing depletion of ozone over temperate latitudes, where a large percentage of the world’s population resides, since the ozone layer serves as a shield against ultraviolet radiation, which has been found to cause skin cancer."[6]

The mesosphere is the layer in which many meteors burn up while entering the Earth’s atmosphere.  Imagine a baseball zipping along at 30,000 miles per hour.  That’s how big and fast many meteors are.  When they plow through the atmosphere, meteors are heated to more than 3000 degrees Fahrenheit, and they glow.  A meteor compresses air in front of it.  The air heats up, in turn heating the meteor.[7] 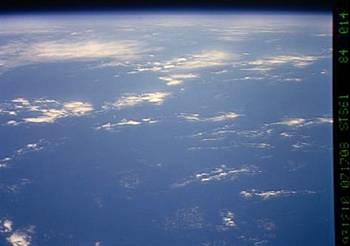 This is an image which shows the Earth and its atmosphere.  The mesosphere would be the dark blue edge located on the far top of the image underneath the back.
(Image courtesy of NASA)

Earth is surrounded by a magnetic force field - a bubble in space called "the magnetosphere" tens of thousands of miles wide.  The magnetosphere acts as a shield that protects us from solar storms.  However, according to new observations from NASA’s IMAGE spacecraft and the joint NASA/European Space Agency Cluster satellites, immense cracks sometimes develop in Earth’s magnetosphere and remain open for hours.  This allows the solar wind to gush through and power stormy space weather.  Fortunately, these cracks do not expose Earth’s surface to the solar wind.  Our atmosphere protects us, even when our magnetic field does not.[8] 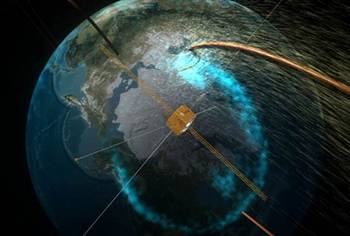 An artist’s rendition of NASA’s IMAGE satellite flying through a ‘crack’ in Earth’s magnetic field.

How would it be possible for a seventh century desert dweller to describe the sky in a manner so precise that only recent scientific discoveries have confirmed it?  The only way is if he received revelation from the Creator of the sky.

[1] Al-Samaa’, the Arabic word translated here as ‘sky’ includes earth’s atmosphere as indicated by the verse 2:164.

any body would have use such description. it is a visual perception

With reference to Reid's comment about anyone being able to make a statement as above about the sky, I completely disagree. As a Muslim, it is hard for me to be objective about the statements made in the Holy Quran but if one looks at all the signs and descriptions about nature, it would have been impossible for a person to have made those statements not knowing what we know now from science.

Allah Hu Akbar - what a great detail about atmosphere. Allah is Great who has created all this for human being to think over, respect and to submit themselves to the Creator.

It is unbelivable!! Thousands of years back it is mentioned in our holy Qura'an regarding Ozon layers, and many astrnomical wonders. But in this centuary NASA & Other agencies are took valuable in formations from our holy Qura'an & going for studies. I can be proud on my decision to become a MUSLIM. “By the sky which returns.” (Quran 86:11) “[He] who made for you the earth a bed [spread out] and the sky a ceiling…” (Quran 2:22)*

All details are so informatic*

May Allah bless the creator of this website for spreading the truth.

its realy show us that Allah is the most mercefull, and from him we came and to him is our returning.

Wow this was very interesting :-)

Lillahil Wahidil Qahhar. May Allah count us among the believing and understanding ones. And may He (SWT) open our hearts to accept the truth.

this is a great work, pls try to keep it up

We should make a habit to not only recite Quran but also understand. If we don't know Arabic we can read its translation and interpretation.