Description: A comparison between modern methods of recording history and that used in hadeeth.  Part Three: The methodology of hadeeth. 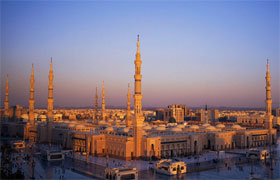 A Prophetic hadeeth is a narration from or about the Prophet Muhammad (may the mercy and blessings of God be upon him), and it is through the ahadeeth (plural of hadeeth) that Muslims know about the Prophet’s way of life, the Sunnah.  Such knowledge is a necessary prerequisite for fulfilling the Muslim’s most basic religious requirements, and the Prophet naturally made it a point to spread this knowledge about himself during his lifetime.

The Prophet sought to teach his Companions through different ways such as repetition, questioning, dictation, and practical demonstration.  After teaching them he would listen to what they had learnt.  Along with his Companions, deputations from outside were educated in both the Quran and the Sunnah.  The Prophet would question them as well to see what they had learnt (Azami 9)[1].  Furthermore, the letters sent by the Prophet, some of which were quite lengthy and dealt with a wide range of legal matters, also constituted a means of teaching his Sunnah.  Apparently there must have been a great deal of writing in general as it is said that he had at least forty-five scribes at one time or another (Azami 10).  He also would dictate to different companions such as Ali b. Abu Talib, and he is known to have sent copies of his sermons to certain people.  Last but not least was the practical example he lay for his followers with his clear instructions to do as he does (i.e., “Pray as you see me praying” [Bukhari, Vol. 1, Book 11, No. 604] and “Learn from me the rituals of pilgrimage” [Sahih Muslim, Book on Hajj, No. 310]).  He was known to advise a questioner to stay with him and learn by observing him (Azami 10).

Other measures were taken by the Prophet to spread knowledge of his Sunnah, such as the establishment of what may be regarded as schools.  It is known that these were established in Madinah soon after his arrival, and that he would send teachers to various places outside of the city.  He emphasized to his Companions to pass on knowledge about him, and among his sayings are “Pass on knowledge from me even if it is only one verse” (Azami 10).  In his famous farewell sermon he is reported to have said, “Those who are present (here) should convey the message to those who are absent.” [Bukhari, Vol. 2, Book 26, No. 795] Consequently it was a common practice among his Companions to inform those who were absent about the Prophet’s sayings and actions.  Additionally, the Prophet would specifically instruct delegations to teach their people what they had learnt upon their return.  He encouraged all this activity by informing on the great rewards for teaching and learning, as well as the possible punishment for refusing to do so (Azami 12).

On the part of the Prophet’s Companions, it should be remembered how people take care to watch and imitate the actions and sayings of one they love and admire.  It is well known the extent of love the Prophet’s Companions had for him and that many would unhesitatingly die to protect him.  Given this and their excellent memories, as well as the various methods the Prophet himself employed to teach his Sunnah, it would seem safe to assume that they did indeed know his Sunnah.  In fact, reports show that they not only tried to learn it, but they tried to preserve it through various means such as memorization and recording.  There are various examples of the Companions of the Prophet memorizing together and cultivating what they had just learned from the Prophet (Azami 13).  Many of them are known to have recorded the hadeeth, and following the Prophets instruction, they would emulate him based on what they had learned.  After the Prophets death, there are several reports showing that they continued in their efforts to memorize, practice, and preserve what they had learned from him.  Furthermore, there are reports showing Companions such as Ali b. Abu Talib, Ibn Masud, and Abu Sa’id al-Khudri advising the people who came after them (the Successors) to memorize the hadeeth, which they would do either individually or collectively in groups (Azami 15).

After the Prophets death, Islam spread beyond Arabia to distant lands.  As the Companions of the Prophet were the ones who pioneered the expansion, it follows that the knowledge of hadeeth that they had went with them, and that not all of it remained in Madinah.  Therefore, it is possible that a certain Sunnah was known to particular Companions who had left to settle in some distant land.  As was previously mentioned, the Companions saw to it that those who came after them, the Successors, continued in the learning and preservation of hadeeth so that the knowledge would not be lost.  However, now that the knowledge of the Sunnah was not concentrated in one place but had spread to different parts of the Muslim world, the likelihood of making errors arose, and consequently techniques for criticism had to be developed, especially after the first fitnah (Azami 49).  Additionally, with the spread of the Sunnah, new techniques had to be developed for learning hadeeth.

Though all the techniques were important in preserving the hadeeth, the practice of a teacher reading to their students was a particularly significant technique that was developed very early.  This included reading by the teacher from the students book, which was either a complete or partial copy of the teachers book (Azami 17).  Students and scholars would test their teachers knowledge by inserting hadeeth throughout the book before giving it to their teacher for reading.  Teachers who didnt recognize the additions were “denounced and declared untrustworthy” (Azami 17).  Additionally, it is said that from the beginning of the second century, the technique of reading by the students to their teachers became the most common practice (Azami 19).  This was done in the presence of other students who would then compare with what they had in their books or listen carefully.  In copying, it is said that they would usually make a circular mark after every hadeeth, and that once the hadeeth had been read to the teacher a mark would be made in the circle or elsewhere to indicate so.  Also, every additional time a hadeeth was read to the teacher another mark would be made indicating so, and at times scholars would read the same book many times.  The reason probably was to counter-act the challenges presented by the Arabic scriptthe reporter had to hear a particular hadeeth from the person from whom he is transmitting, and transmit exactly what he heard (thus the grading of reporters became necessary to know who did this best) (Burton 110-111)[2].  Furthermore, from a very early time, the necessity of reviewing copies became evident, and it is reported that teachers would help their students in this task to eliminate copying mistakes.  It is important to know that one who did not follow the proper methods in teaching or compiling his own book could be accused of stealing hadeeth, even if the material was authentic.  Hence it was critical that the hadeeth were obtained properly.  There are several other techniques, but for the purpose of this paper it is important to know that the scholars of hadeeth used special terms in the transmission of a hadeeth, depending upon the technique employed in teaching it.  Also worth pointing out is that these special terms such as “haddathana,” “akhbarana,” and “an,” are often mistaken to mean that the transmission was strictly oral, although it has been shown that this was not the case.

[2] Burton, John. An Introduction to the hadeeth. Edinburgh: Edinburgh UP, 1994.