The Second Pillar of Islam: The Prayer

Description: An introduction to the second pillar of Islam, the Ritual Prayer, its spiritual dimensions, the Adhan (the ‘Call to Prayer’), and the Friday Prayer (Jumuah).

Salah is the daily ritual prayer enjoined upon all Muslims as one of the five Pillars of Islam.  It is performed five times a day by all Muslims.  Salah is a precise worship, different from praying on the inspiration of the moment.  Muslims pray or, perhaps more correctly, worship five times throughout the day: 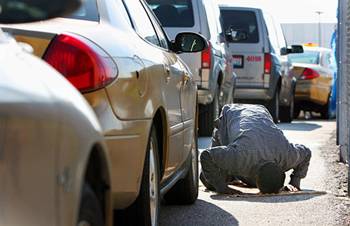 Each prayer may take at least 5 minutes, but it may be lengthened as a person wishes.  Muslims can pray in any clean environment, alone or together, in a mosque or at home, at work or on the road, indoors or out.  Under special circumstances, such as illness, journey, or war, certain allowances in the prayers are given to make their offering easy.

Having specific times each day to be close to God helps Muslims remain aware of the importance of their faith, and the role it plays in every part of life.  Muslims start their day by cleaning themselves and then standing before their Lord in prayer.  The prayers consist of recitations from the Quran in Arabic and a sequence of movements: standing, bowing, prostrating, and sitting.  All recitations and movements express submission, humility, and homage to God.  The various postures Muslims assume during their prayers capture the spirit of submission; the words remind them of their commitments to God.  The prayer also reminds one of belief in the Day of Judgment and of the fact that one has to appear before his or her Creator and give an account of their entire life.  This is how a Muslim starts their day.  In the course of the day, Muslims dissociate themselves from their worldly engagements for a few moments and stand before God.  This brings to mind once again the real purpose of life.

These prayers serve as a constant reminder throughout the day to help keep believers mindful of God in the daily stress of work, family, and distractions of life.  Prayer strengthens faith, dependence on God, and puts daily life within the perspective of life to come after death and the last judgment.  As they prepare to pray, Muslims face Mecca, the holy city that houses the Kaaba (the ancient place of worship built by Abraham and his son Ishmael).  At the end of the prayer, the shahada (testimony of faith) is recited, and the greeting of peace, "Peace be upon all of you and the mercy and blessings of God," is repeated twice.

Though individual performance of salah is permissible, collective worship in the mosque has special merit and Muslims are encouraged to perform certain salah with others.  With their faces turned in the direction of the Kaaba in Mecca, the worshipers align themselves in parallel rows behind the imam, or prayer leader, who directs them as they execute the physical postures coupled with Quran recitations.  In many Muslim countries, the "call to prayer," or ‘Adhan,’ echo out across the rooftops.  Aided by a megaphone the muezzin calls out:

Ash-hadu an-laa ilaaha il-lal-lah (I witness that none deserves worship except God).

Ash-hadu an-laa ilaaha il-lal-lah (I witness that none deserves worship except God).

Ash-hadu anna Muhammadar-Rasool-ullah (I witness that Muhammad is the messenger of God).

Ash-hadu anna Muhammadar-Rasool-ullah (I witness that Muhammad is the messenger of God). 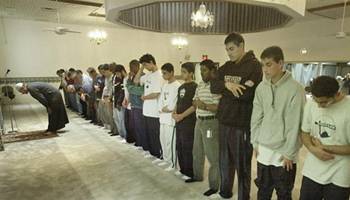 Men are joined by some of the students from the Noor-ul-Iman School for afternoon prayer at the Islamic Society of New Jersey, a mosque in suburban South Brunswick, N.J., Tuesday, May 13, 2003.  Many Muslims communities across the United States are spreading out from the cities to the suburbs. (AP Photo/Daniel Hulshizer)

·       It falls in the same time as the noon prayer which it replaces.

·       It must be performed in a congregation led by a prayer leader, an ‘Imam.’ It can not be offered individually.  Muslims in the West try to arrange their schedules to allow them time to attend the prayer.

·       Rather than  a day of rest like the Sabbath, Friday is a day of devotion and extra worship.  A Muslim is allowed normal work on Friday as on any other day of the week.  They may proceed with their usual activities, but they must break for the Friday prayer.  After the worship is over, they can resume their mundane activities.

·       Typically, the Friday Prayer is performed in a mosque, if available.  Sometimes, due to unavailability of a mosque, it may be offered at a rented facility, park, etc.

·       When the time for prayer comes, the Adhan is pronounced.  The Imam then stands facing the audience and delivers his sermon (known as khutba in Arabic), an essential part of the service of which its attendance is required.  While the Imam is talking, everyone present listens to the sermon quietly till the end.  Most Imams in the West will deliver the sermon in English, but some deliver it in Arabic.  Those who deliver it in Arabic usually deliver a short speech in the local language before the service.

·       There are two sermons delivered, one distinguished from the other by a brief sitting of the Imam.  The sermon is commenced with words of praise of God and prayers of blessing for Prophet Muhammad, may the mercy and blessings of God be upon him.

·       After the sermon, the prayer is offered under the leadership of the Imam who recites the Fatiha and other Quranic passages in an audible voice.

Special, large congregational prayers, which include a sermon, are also offered at late morning on the two days of festivity.  One of them is immediately following the month of fasting, Ramadan, and the other after the pilgrimage, or hajj.

Although not religiously mandated, individual devotional prayers, especially during the night, are emphasized and are a common practice among pious Muslims.

I love fasting because i am a muslim my comment is its nice to see people becoming muslims such as christians they stop smoking and drugging the muslims life is a clean life.

Excellent website in the internet. We could learn more about Islam.

For weeks I have had this sentance in arabic stuck in my head, and I knew not what it meant. Allahu Akbar! Now I know this, thankyou! Allahu Akbar indeed!

Assalamu Alaikum. After going throught this website for the first time, i got so impressed with its knowledge bank, and live chat that i have decided to read 1-2 topics from this website everyday. I have gone through many islamic websites but got the right one after 1-2 years. Regarding this topic, i would like to thank all my brothers, directly or indirectly, related with website for their hardwork and presenting the accurate information to the people. I never got so informative topics about Islam. Wish U the blessings of Allah, here and there.

WEL dis web site has tought me alot on becoming an MUSLIM which im am doin, and its realy helping me on learning more about the RELIGION.

it is a good site

it is a good site

I've tried to read a section every night and I'm impressed with how clear the explanations are. I've used the chat to ask questions from time to time and no matter what time I access the chat someone has been there. Thank you.

Being a Muslim one has to perform five prayers regularly and punctually. This is the most important and prominent act of worship which is obligatory on every adult male and female Muslim.

this is really good but needs some improvement