Description: The early life and education of a Harvard Hollis scholar and author of the book “The Cross and the Crescent”, disillusioned by Christianity due the information learnt in its School of Theology. Part 4: “From Cross to Crescent.”

It was now March of 1993, and my wife and I were enjoying a five-week vacation in the Middle East.  It was also the Islamic month of Ramadan, when Muslims fast from day break until sunset.  Because we were so often staying with or being escorted around by family members of our Muslim friends back in the States, my wife and I had decided that we also would fast, if for no other reason than common courtesy.  During this time, I had also started to perform the five daily prayers of Islam with my newfound, Middle Eastern, Muslim friends.  After all, there was nothing in those prayers with which I could disagree.

I was a Christian, or so I said.  After all, I had been born into a Christian family, had been given a Christian upbringing, had attended church and Sunday school every Sunday as a child, had graduated from a prestigious seminary, and was an ordained minister in a large Protestant denomination.  However, I was also a Christian who didn’t believe in a triune godhead or in the divinity of Jesus, peace be upon him; who knew quite well how the Bible had been corrupted; who had said the Islamic testimony of faith in my own carefully parsed words; who had fasted during Ramadan; who was saying Islamic prayers five times a day; and who was deeply impressed by the behavioral examples I had witnessed in the Muslim community, both in America and in the Middle East.  (Time and space do not permit me the luxury of documenting in detail all of the examples of personal morality and ethics I encountered in the Middle East.)  If asked if I were a Muslim, I could and did do a five-minute monologue detailing the above, and basically leaving the question unanswered.  I was playing intellectual word games, and succeeding at them quite nicely.

It was now late in our Middle Eastern trip.  An elderly friend who spoke no English and I were walking down a winding, little road, somewhere in one of the economically disadvantaged areas of greater ‘Amman, Jordan.  As we walked, an elderly man approached us from the opposite direction, said, “Salam ‘Alaykum”, i.e., “may the mercy and blessings of God be upon him”, and offered to shake hands.  We were the only three people there.  I didn’t speak Arabic, and neither my friend nor the stranger spoke English.  Looking at me, the stranger asked, “Muslim?”

At that precise moment in time, I was fully and completely trapped.  There were no intellectual word games to be played, because I could only communicate in English, and they could only communicate in Arabic.  There was no translator present to bail me out of this situation, and to allow me to hide behind my carefully prepared English monologue.  I couldn’t pretend I didn’t understand the question, because it was all too obvious that I had.  My choices were suddenly, unpredictably, and inexplicably reduced to just two:  I could say “N’am”, i.e., “yes”; or I could say “La”, i.e., “no.”  The choice was mine, and I had no other.  I had to choose, and I had to choose now; it was just that simple.  Praise be to God, I answered, “N’am.”

Not too many months after our return to America from the Middle East, a neighbor invited us over to his house, saying that he wanted to talk with us about our conversion to Islam.  He was a retired Methodist minister, with whom I had had several conversations in the past.  Although we had occasionally talked superficially about such issues as the artificial construction of the Bible from various, earlier, independent sources, we had never had any in-depth conversation about religion.  I knew only that he appeared to have acquired a solid seminary education, and that he sang in the local church choir every Sunday.

My initial reaction was, “Oh, oh, here it comes.”  Nonetheless, it is a Muslim’s duty to be a good neighbor, and it is a Muslim’s duty to be willing to discuss Islam with others.  As such, I accepted the invitation for the following evening, and spent most of the waking part of the next 24 hours contemplating how best to approach this gentleman in his requested topic of conversation.  The appointed time came, and we drove over to our neighbor’s.  After a few moments of small talk, he finally asked why I had decided to become a Muslim.  I had waited for this question, and had my answer carefully prepared.  “As you know with your seminary education, there were a lot of non-religious considerations which led up to and shaped the decisions of the Council of Nicaea.”  He immediately cut me off with a simple statement:  “You finally couldn’t stomach the polytheism anymore, could you?”  He knew exactly why I was a Muslim, and he didn’t disagree with my decision!  For himself, at his age and at his place in life, he was electing to be “an atypical Christian.”  God willing, he has by now completed his journey from cross to crescent.

There are sacrifices to be made in being a Muslim in America.  For that matter, there are sacrifices to be made in being a Muslim anywhere.  However, those sacrifices may be more acutely felt in America, especially among American converts.  Some of those sacrifices are very predictable, and include altered dress and abstinence from alcohol, pork, and the taking of interest on one’s money.  Some of those sacrifices are less predictable.  For example, one Christian family, with whom we were close friends, informed us that they could no longer associate with us, as they could not associate with anyone “who does not take Jesus Christ as his personal savior.”  In addition, quite a few of my professional colleagues altered their manner of relating to me.  Whether it was coincidence or not, my professional referral base dwindled, and there was almost a 30% drop in income as a result.  Some of these less predictable sacrifices were hard to accept, although the sacrifices were a small price to pay for what was received in return. 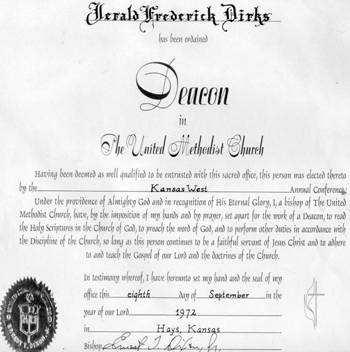 Please note: The ordination certificate above was too large to scan in completely - the top line of text is missing, which says “Let It Be Known To All Men That” 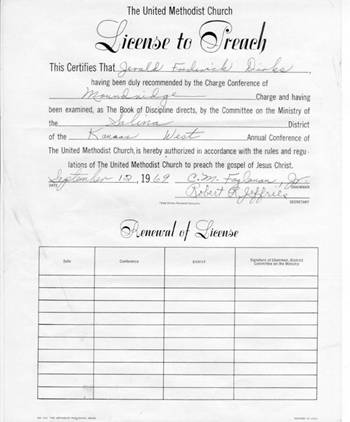 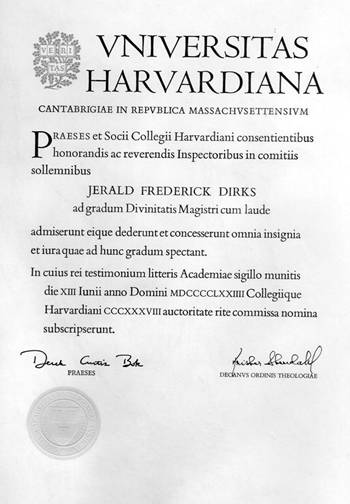 I found this article very honest & revealing. I am, myself making a similar journey, having researched the origins of the Holy Bible & explored various religions. I, now, attest to the belief of a monotheistic God. I know longer consider myself Christian, & have for many years questioned Jesus (pbuh) as a part of the Godhead or the son of God, but as a special man of God with an important role to play in the scheme of things. I have also been reading about the prophet Muhammad (pbuh) & have come to see him as the final prophet of Allah. With this newfound knowledge, has come a peace i have never known before. I still have much to learn about this deen, but insha'allah, i will. It can be especially challenging for someone living in the Bible Belt with no other muslims for miles, but i pray to Allah that He will open doors for me, that i might grow in strength & faith in Islam. It is so encouarging & uplifting to hear testimonies like Mr. Dirks. Thank you so much for sharing. Fe aman Allah! Linda, USA

I am very thankful for this article. I myself am a Master of Divinity student in my final year of seminary, heading down the path of ordination for the United Methodist Church. However, after befriending a Muslim last spring, I decided to study Isalm to fulfill one of my requirements before graduation. Now I have other Muslim friends and though none of them have ever pressured me or tried to convert me, I am more and more drawn to Islam, and I identify with many of the things Mr. Dirks has outlined here. I feel very thankful for this article, because I am at a crossroads between my education and my vocation and this has given me even more courage. Thank you very much for this post.