Description: A court ruling overturning a fifteen year British ban on its leader, Louis Farrakhan, has propelled the so-called Nation of Islam into the headlines.  Michael Young examines the Islamic credentials of these self-styled “Muslims”.

The Fundamentals of Islamic Belief 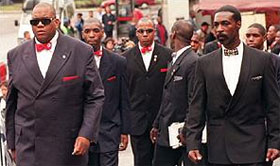 One could be forgiven for assuming that any group with the word Islam in its title would be Muslim.  But when it comes to the group calling itself the “Nation of Islam”, one must be very wary indeed.  To be Muslim means to hold certain fundamental theological beliefs.  The Muslim profession of faith is:

To elaborate on these statements, to be a Muslim means to believe that God is One, unique.  He has no partners, no associates, no Son, nor did He ever become incarnate.  As chapter 112 of the Quran makes clear:

He did not beget and is not begotten,

And none is His equal.”

In Islam the ascribing of partners to God, referred to as shirk, is the greatest of all sins.  The Quran states explicitly in chapter 4, verse 36:

“Serve God, and join not any partners with Him.”

Secondly, Muslims believe Mohammed to have been the “Seal” or last of the prophets.  To recognize anyone after Mohammed claiming to be a prophet, negates one’s Islam.  As is stated in the Quran:

“O people!  Mohammed has no sons among ye men, but verily, he is the Messenger of God and the last in the line of Prophets. And God is aware of everything.” (Quran 33:40)

This is reinforced by various sayings of Prophet Mohammed, may the mercy and blessings of God be upon him:

“The tribe of Israel was guided by prophets. When a prophet passed away, another succeeded him. But no prophet will come after me; only caliphs will succeed me.” (Saheeh Al-Bukhari)

“In My Ummah, there shall be born Thirty Grand Liars (Dajjals), each of whom will claim to be a prophet, But I am the Last Prophet; there is No Prophet after Me.” (Abu Dawood, At-Tirmidhi)

The Errant Theology of the “Nation of Islam”

The “Nation of Islam” does not adhere to these core tenets of Islamic theology.  They believe that God appeared on earth in the person of their founder, a “great man from the East”, Master W. Fard Muhammad, a preacher who first came to public attention in the USA on July 4, 1930 then mysteriously “departed the scene” on February 26, 1934.  As the NOI website unambiguously declares:

“WE BELIEVE that Allah (God) appeared in the Person of Master W. Fard Muhammad, July, 1930; the long-awaited “Messiah” of the Christians and the “Mahdi” of the Muslims.”

In 1934 following the unexplained departure of the “Master”, the organization he founded came to be headed by one Elijah Poole, who became known as the Honorable Elijah Muhammad.  Until very recently, the “Nation of Islam” accorded the status of prophet to Elijah Muhammad.

Therefore it is clear that despite their name and calling themselves Muslims, “Nation of Islam” beliefs about God and prophethood are glaringly incompatible with Islam.

Louis Farrakhan, current leader of the Nation of Islam, finally allowed to enter the UK after a court orders the lifting of a 15-year government ban.

“Honorable” Elijah Muhammad, the “prophet” of the Nation of Islam.

“Master” W. Fard Muhammad in whose person God appeared in early 1930’s America, according to Nation of Islam beliefs.

A third area of non-compliance with Islam, and the one which receives by far the greatest attention in the secular media, is the issue of race.  The present “Nation of Islam” leader, Louis Farrakhan, is on record as having made objectionable anti-Jewish (as distinct from anti-Zionist) remarks.  Among other unfortunate utterances, he is alleged to have referred to Judaism as a “gutter religion”.

Moreover, the NOI is a segregationalist organization exclusively for black people descended from slaves.  Proper Islam is a universal religion open to people of every race.  Muslims are supposed to differentiate between people on the basis, not of ethnic origin, but of piety and upright behavior.  As the Quran makes clear:

“O Mankind!  Most certainly, it is We (God almighty) who have Created you all from a single (pair) of a male and a female, And it is We who have made you into nations and tribes, that ye may recognize each other.  Verily, the noblest of you in the sight of God is (he who is) the most righteous of you.” (Quran 49:13)

And in his final sermon, Prophet Mohammed made clear that racism has no place in Islam:

“O people!  Verily your Lord is one and your father is one. All of you belong to one ancestry of Adam and Adam was created out of clay. There is no superiority for an Arab over a non-Arab and for a non-Arab over an Arab; nor for white over the black nor for the black over the white except in piety. Verily the noblest among you is he who is the most pious.”

In contrast, the NOI has a pronounced anti-white bias.  They refer to blacks as God’s chosen people and Caucasians as white devils.  They call for a separate homeland for American blacks, for racially segregated education and for a ban on interracial marriage.  To quote again from their website:

We believe we are the people of God’s choice.

We want our people in America whose parents or grandparents were descendants from slaves, to be allowed to establish a separate state or territory of their own--either on this continent or elsewhere.

We want all black children educated, taught and trained by their own teachers.

We believe that intermarriage or race mixing should be prohibited.